Kissed by a Hellfire Missile

D.W. Wilber
|
Posted: Jan 04, 2020 12:01 AM
Share   Tweet
The opinions expressed by columnists are their own and do not necessarily represent the views of Townhall.com. 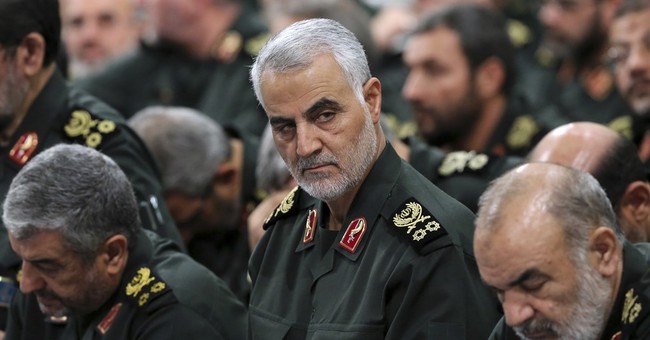 Since 1979 the Islamic Republic of Iran has been at war with the United States. Generally a very one-sided war with only the Iranian fanatics in Tehran inflicting any casualties. The United States has been reluctant to really engage Iran, partly out of fear of things escalating into a larger regional conflict. And partly out of some misguided belief that one can negotiate with religious fanatics and expect them to abide by any treaty or agreement they enter into.

In 1979 the Iranian regime took and held American diplomats hostage for four hundred forty four days, only releasing them when they feared that the recently elected American President Ronald Reagan would not be weak and indecisive like his predecessor Jimmy Carter. It was the fear of a strong American leader that convinced Iran that it was in their best interests to release the Americans they were holding.

But just because the feckless and weak Carter Administration had been hustled out of office by Ronald Reagan, that did not stop the Iranians from continuing to take individual Americans hostage. Or to commit other acts of terrorism around the world and meddle in the business of other nations, supporting and fomenting insurrection where they could.

Iran has been and continues to be a bad actor on the world stage. In Iraq during America’s involvement there, Iran was directly responsible for the maiming and killing of thousands of American service members.

The Iranian General Qassem Soleimani, whose recent departure from this world was facilitated by the United States military on the orders of President Trump, was a particularly unpleasant fellow. His hands were covered in American blood.

And while the Democrats here in the U.S. applaud the fact that Soleimani is now taking a dirt nap, they simply cannot applaud President Trump for a job well done. In fact one can almost hear them and their media sycophants quietly and in hushed tones hoping for a massive Iranian retaliatory attack causing many American deaths. Then they can all shout out in unison, “See, I told you so, Orange Man bad!”

The Democrats in Congress have complained that they were not consulted prior to the operation that resulted in killing Soleimani. Why would the president inform them beforehand about a pending military operation ? It’s not a good strategy to let the enemy know what your intentions are. And the Democrats are most definitely the enemy of this president and his administration, and it’s guaranteed they would have done something to try to undercut President Trump’s decision to act.

The Democrats have repeatedly proven themselves to be untrustworthy in protecting sensitive information, and they clearly pose the greatest internal threat to our nation. I wouldn’t trust any of them to protect the combination to a wall locker in the congressional gym, much less information about a military operation. You can rest assured that your smelly socks and jockstrap would be rifled through in the gym, and any shared military plans would be publicly leaked to our enemies.

Democrats such as former Obama Secretary of State John Kerry have even been meeting with the Iranian regime’s leadership, offering them advice on how to oppose President Trump and America’s own national interests. During America’s revolution against British colonial rule Benedict Arnold did pretty much the same thing, and he would have been hanged had he not fled the country. Consequently Arnold’s name has forever since been associated with treason. Why the long face John?

One would almost expect to see Kerry head up a delegation from the Obama Administration to Tehran to attend Soleimani’s funeral. And certainly Obama’s most trusted senior advisor Valerie Jarrett is probably wearing black and in deep mourning. Perhaps that great strategic planner and intellect Ben Rhodes can write a novel about the Obama Administration’s duplicity and selling out America to the evil Iranian regime.

The fact is that President Trump showed great courage in giving the order to unleash hell on Soleimani and his party on the streets of Baghdad. Certainly he was fully briefed on the fact that retaliation could result, and he determined that killing the beast Soleimani was worth the risk.

Thankfully, we have a president now who isn’t afraid to act decisively when called upon. And while his predecessor bent over backwards kissing up to the Iranians and achieving nothing, the kiss President Trump gave them will be much more effective and much longer lasting.