One Hundred Thousand Tons of Freedom

D.W. Wilber
|
Posted: Jul 26, 2017 12:01 AM
Share   Tweet
The opinions expressed by columnists are their own and do not necessarily represent the views of Townhall.com. 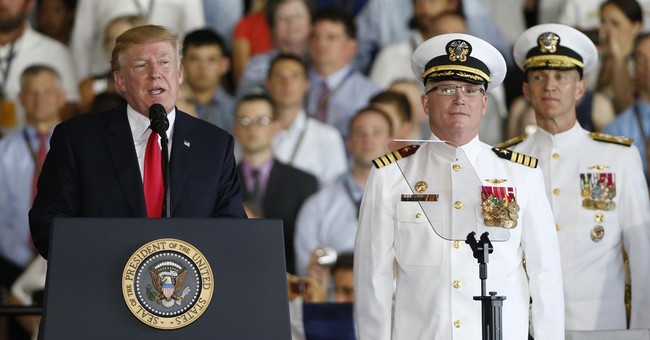 While listening to President Donald Trump’s speech at the commissioning ceremony of America’s newest aircraft carrier, the U.S.S. Gerald R. Ford, I couldn’t help but notice that the president’s entire speech was about America’s military might and the American fighting spirit--and not a single mention was made about climate change or opening up opportunities for transgender people in the military.

The president gave a rousing speech to a mixed civilian and military audience that focused on America’s reemergence as the leader of the free world after eight years of apologies and withdrawal from our historic role as the bastion of freedom and stability in a very dangerous world.

During his campaign and since taking office, President Trump has clearly shown his love for the military forces of the United States.  He knows that the prosperity and future of this great nation rests on the shoulders of our military heroes, and he has been very vocal in his support of the military and America’s veterans.

Unlike his predecessor, Trump also takes every opportunity to also express his appreciation for the efforts of America’s law enforcement professionals, who he also recognizes stand on the front lines protecting America from chaos and lawlessness.

I have to say that it was refreshing to hear a president once again give a stirring speech extolling the war-fighting abilities and the courage of America’s warriors who are taking the fight to ISIS, and protecting our country from those who would do our nation harm.  Under the previous administration, there actually was given serious consideration to awarding a military medal for “courageous restraint.” In other words, for not killing the enemy.  This is something you won’t see under a Trump Administration.

Can you imagine if former President Barack Obama were giving that speech on the hanger deck of the Navy’s newest aircraft carrier? He would have devoted half of his comments to climate change as America’s biggest enemy, with special mention of all of the environmentally-friendly features of the U.S. Navy’s new war machine. I suspect he also would have touted the U.S.S. Gerald R. Ford’s transgender accommodations as well.

Likely no mention would be made of the fact that under his administration the vessel would probably have spent most of its time in port and not patrolling the high seas.  After all, that would create much less of an impact on the environment than having the ship out polluting the oceans.  And certainly under Obama we wouldn’t want to display American power and military might as it could offend someone, or be misunderstood by our friends and enemies as an example of American aggression.

Whereas Trump says “we demand total victory, and we will have total victory,” Obama would have waxed poetically on the need to open up military opportunities for those who are confused about their gender, and perhaps made sure that our troops clean up the battlefield after an engagement so as to restore it to the condition it was in prior to our troops spilling their blood all over it.

Indeed, the difference between the previous eight years under Obama and the first six months under Trump are like night and day when it comes to the relationship between the Commander in Chief and his troops.

As the professionals that they are, the military was always respectful towards Obama, but muted in their enthusiasm whenever he paid them one of his photo-op visits.  Whereas with Trump, the folks in the Armed Services are genuinely appreciative of his obvious devotion to them.  They openly and enthusiastically display it.  Warriors can recognize sincerity, just as they can also detect when the words expressed are simply being recited.

Secretary of Defense James Mattis, man of few words, but a man of action instead, introduced the president at the ceremony.  Of all the appointments the president has made in his administration, Secretary Mattis has been the best selection he could have made at such an important time in our military’s history.

After eight years of social experimentation under the Obama Administration, Mattis and Trump are returning the United States military to its true purpose of protecting and defending America from all enemies foreign and domestic.

During the next eight years I doubt you’re going to see many medals being awarded for “restraint," and a lot more medals being bestowed for killing our enemies and defending America and our friends.  And you once again will be able to openly thank God for it.

Under this administration, America is back!  And the U.S. Navy’s one hundred thousand tons of freedom is confirmation.