D.W. Wilber
|
Posted: Aug 06, 2016 12:01 AM
Share   Tweet
The opinions expressed by columnists are their own and do not necessarily represent the views of Townhall.com. 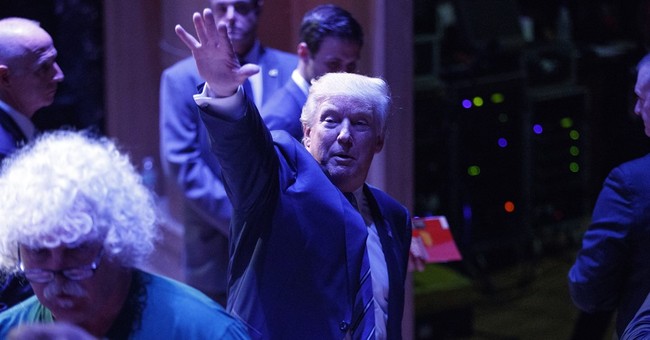 As we are nearing the stretch drive for the general election in November, many life-long Republicans have voiced their dislike of the party’s nominee for president, businessman Donald J. Trump.  Some well-known Republicans have stated that they will vote for Trump’s opponent Hillary Clinton instead.  The ‘Dump Trump’ and ‘Never Trump’ Republicans have been very vocal about the fact that they cannot bring themselves to cast a ballot for Donald Trump.

For all those Republicans who fall into this category I have a suggestion.  Perhaps an alternative that will give them some ‘principle’ to stand on, while also preventing the most dishonest, corrupt, and despicable politician in American history, Hillary Clinton from ever setting foot inside the White House again.  Check the box next to “Straight Republican Ticket” on your ballot !

If one’s conscience will not allow them to put a check mark next to Trump’s name, then vote for the party instead.  Yes, realistically Trump will still get your vote, but at least you will have the satisfaction of not having voted directly for the Republican nominee.  If this is about ‘conscience and principle’, then how can any Republican even consider voting for Hillary Clinton ?

You will also be voting for the people that Trump will surround himself with, many of which have already been identified publicly.  Politicians like Newt Gingrich, who knows the ins and outs of getting legislation passed and working within the halls of Congress might be an excellent choice for Chief of Staff, LTG Mike Flynn will be an excellent DNI or Director of the CIA, or perhaps even Secretary of State.  And perhaps Allen West, who would make an outstanding National Security Advisor.  These are the caliber of people Trump will call upon to advise him.

Your alternative is the people Hillary Clinton will surround herself with.  John Podesta, Sydney Blumenthal, Debbie Wasserman-Schultz, and others of that ilk are just the tip of the ice berg of the extreme leftist-liberal administration that she will put together.

Consider this, Donald Trump has already identified a number of judges he would consider for appointment to the United States Supreme Court.  There have been few objections to any of those eminently qualified jurists that have been named.

Can any Republican honestly expect that a President Hillary Clinton – it hurts to even write that – will nominate anyone for the Supreme Court who won’t assume a position on the nation’s highest court without a liberal political agenda to pursue ?

I think it’s a pretty good bet that unless they pass Hillary’s personal ideological litmus test – which will include unfettered abortion rights, even for full term babies; an end to the Constitution’s Second Amendment and the rights of citizens to bear arms, along with countless other extreme liberal positions, any potential nominee to the court will not get a second look by Hillary.  This alone should be reason to oppose the Democrat candidate and vote for the Republican ticket.

Speaking of the Second Amendment, the Republican nominee Donald Trump has identified himself as a staunch supporter of an American’s right to bear arms, as guaranteed in the United States Constitution.  Hillary has already said that she will severely restrict gun ownership.  She’s been very clear about her intentions to succeed in disarming Americans.

With regards to the Syrian refugee program, Donald Trump has said that he will stop this madness, and take a careful look at all travel and immigration from nations that have supported terrorism.  Hillary Clinton is foursquare behind Barack Obama’s effort to open the flood gates of Syrian refugees into the United States.  Included among those refuges are certain to be terrorist members of the Islamic State and other terrorist organizations intent on harming Americans.

Speaking of immigration, Hillary Clinton intends to continue the open border policy of Barack Obama, and will go even further offering amnesty for all the illegal aliens currently residing inside this country.  She certainly isn’t going to invest any money in securing the border.  Why make it harder for potential Democrat voters from entering the United States ?

You can bet your bottom dollar that after amnesty is given to those 11 – 24 million illegal aliens currently in the U.S., they will all be put on a fast track to citizenship and full voting rights !  That is the real plan behind the immigration policies of Barack Obama, Hillary Clinton, and the Democrat Party, to build a permanent majority in government.

And what of the economy and taxes ?  Hillary Clinton has already indicated that she will raise taxes, and continue on the economic pathway created by the failed Obama Administration.  For Americans who are taxed too much already, or who have been unsuccessfully looking for a job for years now, why would anyone consider voting for a candidate who tells us she is going to tax us even more ?

A Trump presidency will create jobs by undoing the immense tax and regulatory burden on the job creators.  He will return money currently outside the U.S. and create an economy that all Americans can benefit from if they are willing to put forth the effort.

And how about crime ?  Donald Trump will be the law and order president.  Hillary Clinton invites the mothers of thugs to speak at her convention.  Need anything more be said ?

For all the disaffected Republicans who say they can never vote for Trump, consider this.  His name just happens to occupy the top of the ballot.  Who you are really voting for are the people Donald Trump will be surrounding himself with to help him govern the United States of America.

There’s no comparison between the people a Trump presidency will attract and the collection of leftists, liberals and other misfits who will make up Hillary’s administration.