The Myth of Socialism

D.W. Wilber
|
Posted: Mar 18, 2016 12:01 AM
Share   Tweet
The opinions expressed by columnists are their own and do not necessarily represent the views of Townhall.com. 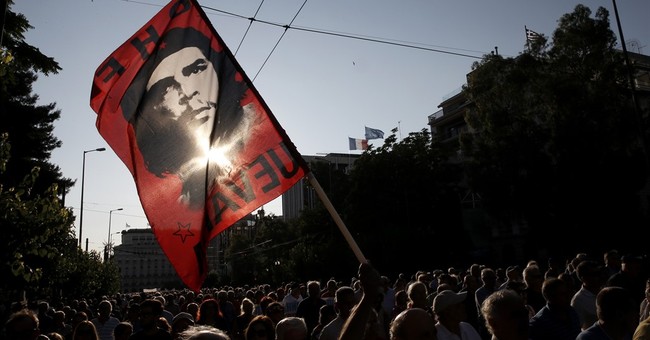 Watching the rioting in Chicago recently at the Donald Trump campaign rally I caught a fleeting glimpse on the television of one of the rioters, someone who appeared to be a ‘twenty-something’ who was enthusiastically waving a Bernie Sanders campaign placard. An ardent Bernie supporter who also was wearing a shirt with the image of the deceased former Cuban revolutionary Che Guevara emblazoned across the front.

I also noticed the rioters chanting loudly, many with a contorted look of rage and anger on their faces, and I couldn’t help but wonder if these enthusiastic supporters of ‘America’s Socialist’ Bernie Sanders really understand exactly what they might be getting. It’s apparent they don’t know much about their idealized hero Che Guevara.

If they did a little research instead of just buying a cool-looking T-Shirt, they’d know that Che was a particularly despicable individual. Instead of the anti-capitalist revolutionary hero who fought for the common man that they want to believe, the reality is that Che was a pathological killer who executed his political opponents, and shot minorities and homosexuals for sport. Certainly not the image that those who proudly wear a shirt emblazoned with his image would like to believe.

The ‘heroic’ images of socialism and communism often times depicted in modern art and media are far from the reality of life under those forms of government. Ask anyone who has escaped from those countries. The Berlin Wall cutting across that German city wasn’t built to keep people out!

Years ago before the fall of the Soviet Union I spent some time in what was then West Berlin, a small island of freedom completely surrounded by communist East Germany. Which at that time was completely dominated by the Soviet Union.

The Berlin Wall was a stark reminder to Germans on both sides of the lengths the communists would go to in order to prevent anyone escaping to freedom in the west. Along the wall on the western side at various locations were small crosses or wreaths placed to honor someone who had been shot and killed by East German border guards, simply for trying to get to the west so they could experience that freedom.

Near the iconic Brandenburg Gate, on the western side of the wall that separated that part of Berlin there were viewing platforms constructed. And one could climb the steps up to the top where they could stand and look over the wall into East Berlin.

The ditches, barbed wire, mine fields, and guard towers with armed guards were clearly visible from the platforms. Armed East German guards who were given standing orders to shoot to kill anyone even approaching the wall from the east side could be seen in the towers, watching the eastern side of the wall very closely.

At the time I remember thinking to myself that I wish every single American citizen could be flown at government expense over to West Berlin where they could stand where I was standing on a viewing platform, and they could see for themselves the reality of what socialism and communism had to offer. Perhaps then Americans could see firsthand how lucky we are to live in ‘the land of the free’.

In addition to the Berlin Wall separating East and West Berlin, the entire length of the border between the two Germanys was secured by the communists with more barbed wire, mine fields, and armed guard towers. Unlike the northern border of the United States separating Canada and the U.S., where in many places is separated by nothing more than an imaginary line on maps, one simply couldn’t cross between East and West Germany without placing their lives at risk.

With my diplomatic passport I crossed into East Berlin through Checkpoint Charlie regularly and was able to walk around fairly freely inside East Berlin. Albeit with countless East German security and intelligence agents following me around, often times tripping over each other like the Keystone Cops. And while visiting some of the shops and markets in East Berlin one could purchase posters, books, and yes even T-Shirts festooned with the image of Che Guevara. Viewed as a ‘hero of the revolution’ by the communists.

Fortunately as history has shown us the desire for freedom is so powerful that people are willing to risk their lives to experience it. As the people of Germany eventually were able to do and throw off the shackles of socialism, so too did the other Eastern European nations that had once also been under Soviet domination. And having traveled back to that part of the world since the end of the Cold War I have been able to see firsthand how freedom has taken hold in many of the countries that once made up the Soviet Bloc.

Unlike the United States where the image of Che Guevara can be purchased in many places and proudly worn at Bernie Sanders or Hillary Clinton campaign rallies, other than as a novelty and reminder of the terrible times of the past, you’re not going to find many young people wearing a Che Guevara T-Shirt and praising socialism in those countries that once suffered under it.