What Obamunism in the Military Has Given Us

D.W. Wilber
|
Posted: Feb 20, 2016 9:18 AM
Share   Tweet
The opinions expressed by columnists are their own and do not necessarily represent the views of Townhall.com. 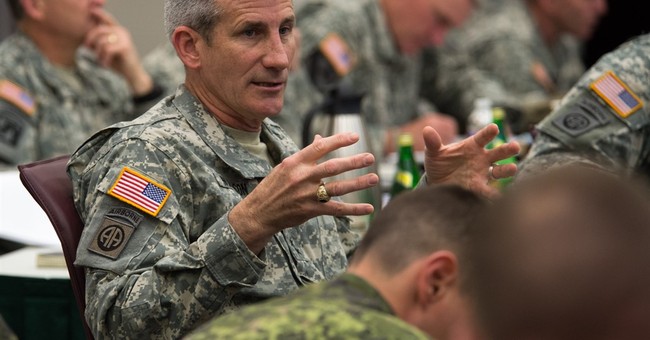 Looking at the case of Sergeant First Class Charles Martland, the highly decorated Green Beret who refused to stand by and do nothing when he was confronted with pure evil, one would think that as a result of how he faced down evil in Afghanistan that he would be given another medal to pin on his uniform.  Unfortunately quite the contrary is the case.  Instead of being rewarded for having the courage to do the right thing, Sergeant First Class Martland may well be facing the end of his military career.

Martland, along with his former commander Captain Daniel Quinn have found themselves victims of the social transformation that ‘Obamunism’ has wrought on our military over the last seven years, and which is now taking place in our intelligence services as well.  A social transformation that has nothing to do with unit discipline or military readiness, or with protecting America.

For those who aren’t familiar with Martland and Quinn’s cases, both were Green Berets serving in Afghanistan in 2011 when they became embroiled in this controversy.  Both were approached by an Afghan woman who claimed that her small son was being regularly raped by a local Afghan police commander.  When she confronted him about the rapes she was severely beaten by the Afghan official.

When the two American soldiers later confronted the Afghan Police commander he simply laughed about the allegations.  At that point the two Americans physically ‘escorted’ him from their base.  Certainly understandable under the circumstances.  But instead of being commended by higher authority both soldiers were disciplined by the military, with Captain Quinn electing to subsequently leave the military.

Sergeant First Class Martland on the other hand had intended to make the military a career.  And after eleven years of exceptional service he suddenly found himself facing expulsion from the military as a result of the disciplinary action appearing on his official military record stemming from his dealing with the Afghan Police commander.  An American soldier, a member of one of our elite branches who the military needs to concentrate on retaining, potentially being forced out because he did the right thing !

As Barack Obama continues full speed ahead with his attempt to “fundamentally transform” the United States of America, much of his efforts have been focused on the military where he has directed that homosexuals be allowed to serve openly, doing away with the previous policy of “Don’t Ask, Don’t Tell”, a policy that was working just fine.

And now ordering that women be allowed to serve in front-line combat units, as well as the elite Special Operations Command as Green Berets, Army Rangers, and Navy Seals.  Regardless of what the potential impact on unit cohesion and combat operations might be.  Again, simply to accommodate a very small percentage of women presently serving who want to wear the coveted Green Beret, Ranger Tab, or Navy Trident.

And most recently the Secretary of Defense has directed the military to take the steps necessary to allow ‘transgender people’ to serve in the armed forces.  As the Director of the Central Intelligence Agency has also now recently ordered.  The very small numbers of which will offer little to the overall strength of America’s military forces or intelligence agencies.

The two entities whose job it is to secure and defend the United States of America are now exhibiting more concern about following Barack Obama’s policy of accommodating a very small percentage of American society, than in concentrating on insuring the safety and security of the American people.

With American military heroes being punished and cashiered out of the military for taking actions that any honorable and decent American would themselves do, it shows us just what ‘Obamunism’ has brought to this country.  Instead of fighting for the oppressed, soldiers are being told to accept or to ‘turn a blind eye’ to abhorrent and evil behavior.

I can’t help but think back to the comments made by former Republican presidential candidate Carly Fiorina, when she told us during an earlier Republican candidate debate about the videos showing Planned Parenthood selling human baby body parts for profit.  She told us then that it was about our national character !

Stopping child molesters and rapists from attacking children wherever we might find them is inherently American.  It’s who we are !  And it too is about our national character.  Certainly not something that should be punished.  In fact, we should be encouraging our military to continue to fight to protect the innocent.

Not only has Barack Obama’s ‘Obamunism’ created a huge racial divide in America and weakened us as a nation, what he has also given us as part of his “fundamental transformation” is the promotion and acceptance of perversion in all of its manifestations.