I’ll Buy You A Ticket Hillary!

D.W. Wilber
|
Posted: Jan 19, 2016 12:01 AM
Share   Tweet
The opinions expressed by columnists are their own and do not necessarily represent the views of Townhall.com. 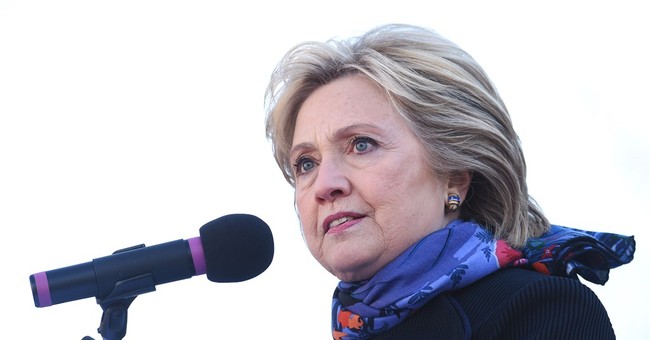 Last Friday I watched the newly released movie ’13 Hours’, which depicts the events of September 11, 2012 when our American Diplomatic Outpost in Benghazi, Libya was attacked by Islamic extremists, and the U.S. Ambassador Chris Stevens and his State Department colleague Sean Smith were killed.  Along with the American security contractors, Tyrone Woods and Glen Daugherty who were working for the Central Intelligence Agency.

Woods and Daugherty were killed during the attack on the nearby CIA covert base, roughly one mile from the Benghazi Diplomatic Outpost. Which as it turns out wasn’t as covert as one would have liked since the extremists clearly knew it was there and were able to attack it in force after leaving the diplomatic facility.

I would strongly urge everyone to watch the movie, which was based on the book written by three of the CIA security contractors who were on the scene and involved in trying to rescue our ambassador.  And who also held the line of defense at the CIA base after it came under attack from a determined and large group of Libyan extremists.

The accurate and honest account shown in the film is non-political and is intended to focus solely on the events of that day.  And to recognize the heroism and courage exhibited by those who fought, and those who gave their lives in defense of the United States of America.

Though politics played no part in the writing of this book or in the making of the movie, the events depicted in the movie cannot help but give the viewers a pretty clear picture of what happened that fateful day.  And of what failed to happen.  And what viewers will see certainly isn’t flattering to Hillary Clinton or to Barack Obama.

In other words it really did make a difference for the people fighting for their lives on the ground in Benghazi that no help was forthcoming.  Especially when contrary to the narrative of the Obama Administration and former Secretary of State Hillary Clinton, help could have arrived in time to make a difference.

Help that perhaps wouldn’t have saved the lives of Ambassador Stevens or Sean Smith, but certainly could have prevented the deaths of Ty Woods and Glen Daugherty when the CIA base was attacked.

As the movie also shows Ambassador Stevens and Sean Smith’s deaths lay right at the feet of Hillary Clinton for her failure to take whatever steps were necessary to provide security for our diplomats in such a dangerous environment as Libya was.

So dangerous in fact that maintaining an embassy in Tripoli and a diplomatic outpost in Benghazi might not have been the wisest policy decision, considering that other western nations withdrew their diplomats from Benghazi because it was too dangerous.

And Hillary Clinton certainly couldn’t admit to having made an unwise policy decision now could she ?  After all, she was already looking ahead to a 2016 presidential campaign, and any evidence of her failure as a policy-maker would be used against her by any future political rivals.

So the narrative about demonstrations “spiraling out of control” was created by the Clinton political advisors as an attempt to provide political cover for Hillary Clinton.  And for Barack Obama as well, who as it turns out was absent from the White House Situation Room while the attacks were taking place.  Apparently showing little interest in what steps were being taken to protect the Americans who were fighting for their lives in far off Benghazi.

Fortunately those fighting on the ground in Benghazi were people of character, unlike their bosses in Washington, D.C.  While some of those government employees in Benghazi displayed less than stellar leadership during the time leading up to the attacks and throughout most of the ordeal, some of that can be written off as typical government bureaucratic garbage.  Often displayed by employees worried about their pensions more than about getting the job done.

I realize that Hillary is pretty busy right now with her political campaign, particularly when her poll numbers are falling against just about every opponent in either political party.  But I’d be happy to pick up the cost of a movie theater ticket for her so she can watch 13 Hours and see firsthand what courage looks like.

But I doubt seriously she’s interested in that sort of thing.  She’s proved before, during, and after the Benghazi attacks that she’s only interested in fulfilling her own political ambitions, whatever the cost.