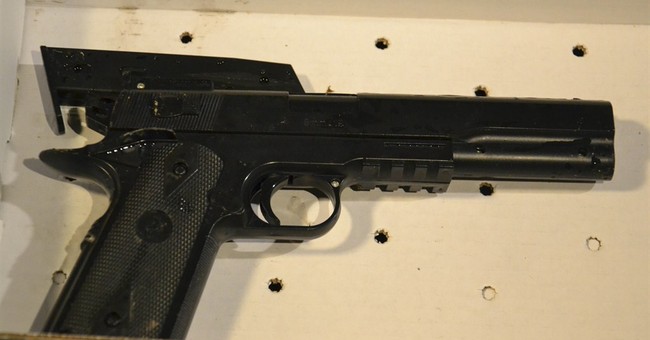 As President Obama departed this past weekend before Christmas for his regular holiday vacation in Hawaii, he left with the promise to once again when he returns try to find a way to implement stricter gun control on law abiding American gun owners, bypassing Congress and using the executive authority he believes he has.

Actually it’s not that he really believes he possesses the right to infringe on Americans’ Second Amendment rights, he knows full well that he doesn’t. He simply doesn’t care about Americans’ constitutional rights, particularly when it comes to guns. He has already said on occasions that the U.S. Constitution gets in his way at times and prevents him from doing what he wants to do.

Obama has also discovered that a gutless Republican Congress will just sit back and allow him to do whatever he wants, not holding him accountable for the acts he has committed while president that would have gotten a Republican impeached and removed from office were the roles reversed and Democrats controlled the Congress, and a Republican was president. Republicans are simply afraid of doing such a thing out of fear of being called racists.

So what if it fails in the Senate and he can’t be removed from office! At least it’ll tie Obama and his team up for his last year in office, and make it harder for him to continue his “fundamental transformation” of the United States of America. And Americans’ Second Amendment rights will remain intact.

Obama and the Democratic Party continue to attack responsible and law abiding gun owners in America for the rampant crime problems plaguing America’s inner cities. And on each occasion when there is a mass shooting by a crazed individual, or a terrorist couple, Obama and Democrats quickly go to their ‘default position’ and want to punish gun owners with new and useless laws that will stop not a single act of violence.

With human nature as it is, it’s always much easier to point the finger of blame at others than to accept the fact that the Democratic Party’s policies and programs for the last several decades have been a dismal failure. Policies and programs that are the real reason for the nearly out of control crime rates occurring in the parts of America’s cities populated mostly by African-Americans.

Crimes that for the most part are committed with illegal guns, stolen or purchased in violation of countless federal, state, and local laws already on the books. None of which the criminal cared about anyway. The written law means nothing to a gang banger intent on wreaking death and destruction in a particular neighborhood on a given day in any American city.

When’s the last time a ‘gun free zone’ sign stopped anyone from committing an act of gun violence? The answer is never. So the signs are just the typical liberal Democrat ‘feel good’ signs. Putting up signs is the kind of thing that liberal Democrats do to make themselves feel like they’ve really accomplished something. While they stand around and wring their hands and pat each other on the back.

One only has to look back into American history during a time when carrying a gun was as common as wearing pants to understand that guns don’t cause the problem, only bad guys do. The ‘Wild West’, a period when most everyone carried a gun wasn’t nearly as wild as Hollywood script writers would have you believe.

In fact gun violence was a rarity in the American West of old. Even Tombstone, Arizona, the “town too tough to die” experienced only five murders during its peak period. Dodge City, Kansas, the “Queen of the cow towns” had a total of 15 shootings from 1876 until 1885. About 1.5 each year. Hardly worthy of the title of the TV show, ‘Gunsmoke’.

Yes some of those old west towns had city ordinances requiring people check their weapons in with the town marshal when they entered the city limits. But nothing prevented the gun owner from ignoring the law, as often happened, or retrieving their weapons and then walking right back into the Shady Lady Saloon and engaging in gunplay. Again, it was the man who carried the gun and chose to violate the laws, not the gun. But reality and logic doesn’t matter to Obama and the Democrats. It’s all about ‘feel good’ legislation that will have no impact on gun violence.

But this time of year as Obama makes his annual trek west to the warm waters of Hawaii, apparently to relax and gird his loins for the coming fight over guns in America, one needs to take a pause and think about the potential implications if the president continues to run roughshod over Republicans, and over Americans’ constitutional rights.

This time of year even old Santa Claus himself better be careful giving that Red Rider BB Gun to little Ralphie on future Christmas Eves. If Obama and the Democrats have their way even Santa will get carted off to the hoosegow by the town marshal for being in violation of probably a half dozen new gun laws Obama and his party would love to enact.