It’s Just A Flag, What Difference Does It Make? 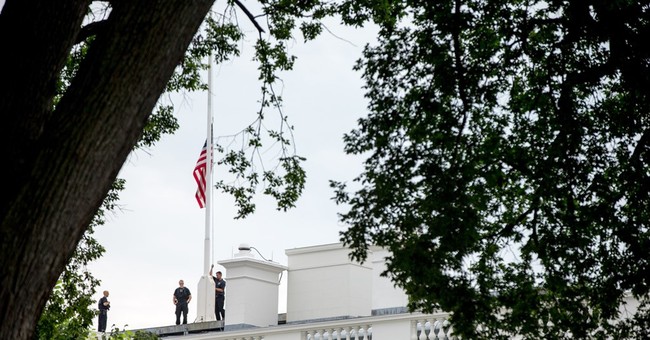 Finally after five days Barack Obama orders the Stars and Stripes flying over the White House and other federal buildings and installations to be lowered to half-staff, to honor the fallen Marines and Sailor who were killed by the ISLAMIC extremist in Chattanooga, Tennessee last week.

While no symbolic gesture like lowering the flags will ever return the loved ones who were so violently taken away from their families, the simple act of recognizing the loss by lowering the flags to half-staff is an important part of the healing process for us as a nation. Particularly during this time of uncertainty in so many parts of the world.

In America we revere our military heroes. We need them. They are part of the national fabric that holds this country together. And honoring and remembering those who have made the ultimate sacrifice is necessary for us as a people. It separates us from all the others who place little value on the lives of their service people. Its part of what makes us an exceptional nation, regardless of what Barack Obama or Vladimir Putin may think.

But as with past tragedies during the Obama presidency, what was an automatic response for previous administrations to pay respect to our heroes, the Obama Administration appears to almost begrudgingly and seemingly come dragged kicking and screaming to show the respect and dignity our military members have earned through their sacrifice and devotion to duty.

The Fort Hood massacre, also committed by an ISLAMIC extremist, is still considered an act of “workplace violence” by the Obama Administration. Thereby at least symbolically denying those who died and were wounded at Fort Hood the honor of being included among all the other brave souls who have been wounded or killed on a field of battle.

It makes no difference that the battlefield was on American soil. The soldiers at Fort Hood were attacked by a foreign ISLAMIC extremist in this on-going War on Terror, not by a deranged co-worker acting out a workplace revenge scenario.

It’s becoming obvious that Barack Obama simply doesn’t relate to what common Americans relate to. He doesn’t understand what “duty, honor, country”, and having a commitment to something bigger than oneself is all about. I don’t believe the president really understands how important those things are to most Americans. And in particular to those who have worn the uniform of the American military.

Or is this apparent tone deafness on the part of this administration purposeful? I find it hard to believe that none of the White House aides ever watch television, including Fox News where the criticism of the administration for these types of lapses is widely reported. After all, the president surely must watch Fox News since he’s always criticizing Fox’s reporting.

One would think that it might prompt a suggestion by some junior staffer to a senior staffer that the administration might need to get out in front of a particular issue, such as lowering the flags to half-staff. Or is this seeming indifference a policy decision that is set at the highest levels?

Is Barack Obama’s apparent lack of respect and proper response towards the military during this tragedy just another example of his efforts to weaken the morale of the military? Or does it just show his lack of understanding of what it means to serve his country and be a part of something bigger than oneself?