Hey Alcee, Give it Back! 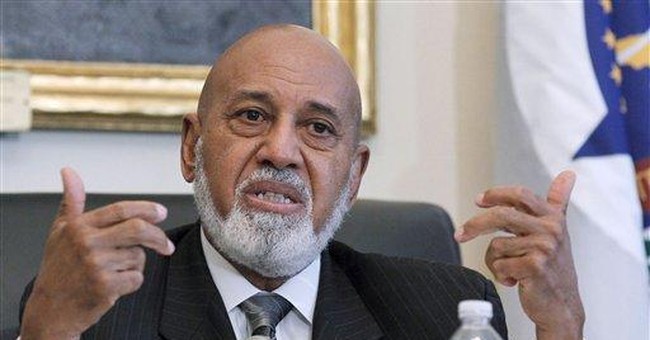 If one visits the U.S. Capitol in Washington, D.C. and stops by the office of Congressman Alcee Hastings they will see hanging on the wall a framed document proclaiming Hastings to be an “Honorary Texan”. An honor that Hastings must be proud of otherwise why display such a document in his congressional office ?

But during a recent congressional meeting Congressman Hastings commented that he thought all Texans were “crazy”. One would think that if Hastings thought that Texans were “crazy” then he certainly wouldn’t want to advertise the fact that he was an “Honorary Texan”, would one.

In fact the argument could be made that the constituents of Alcee Hastings congressional district were the crazy ones, by continuing to elect and return impeached and convicted former federal judges like Hastings to back Congress time after time.

Sending to Congress to represent them an individual who was impeached and removed from a federal judgeship for bribery and perjury, charges mind you that were later upheld by the Senate during an appeal, would seem to indicate some serious lack of common sense on the part of at least some in the Florida electorate.

Even more interesting is that it was a House and Senate controlled by his fellow Democrats who brought the charges against Alcee Hastings back in 1988. Considering it was Democrats bringing charges against another Democrat one might consider his conduct to have been especially egregious.

Back then even the ‘Queen of the Partisans’ Democrat Nancy Pelosi voted to impeach Hastings! My how times have changed.

But unlike Alcee Hastings who called Texans “crazy” I won’t question the sanity of all Floridians. After all, they have sent quite a few Republicans to the State House and to Washington, D.C. recently, and also have rejected washed up, has-been pseudo-Republican/Democrats like Charlie Crist when given the chance.

For the uninformed, Florida Democrat Congressman Alcee Hastings was impeached and removed from the federal judgeship he held back in 1988. According to court records what helped keep Hastings from also going to prison was the refusal of a key witness to testify about Hastings illegal activities.

In the court of public opinion avoiding prison over a technicality doesn’t mean one is innocent of having committed a crime. And in particular when it involves a federal judge, a public official who should be held to the highest standards.

While I don’t live in Texas anymore I will always consider myself to be a Texan at heart. I am proud of the time I lived in Texas and of the family members of mine who live there now.

But after hearing Alcee Hastings comments recently calling Texans “crazy” I was sincerely troubled. Why would an individual who had been afforded an honor given under the name of all the citizens of a state then turn on those who honored him and call them “crazy” ?

In Texas we don’t just remember the Alamo, we also remember corrupt and dishonest politicians who insult us. All I can say in reply is “hey Alcee, give it back !”