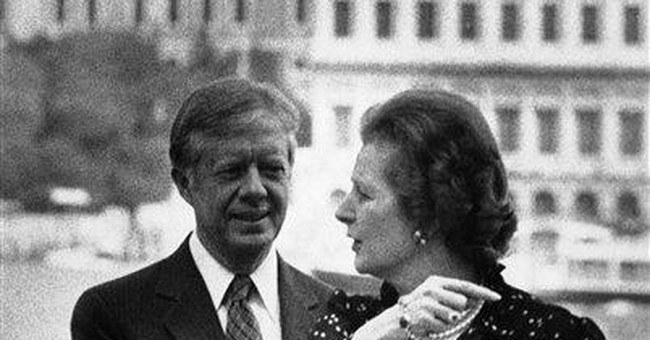 Thirty-five years ago this week I watched with grave concern as the Islamic Republic of Iran, led by a rag-tag group of ‘students’, committed an act of war against the United States and stormed the walls of the U.S. Embassy in Tehran, taking fifty-two American diplomats hostage. Serving overseas at an embassy myself I had a special interest in our response to this aggression. But President Jimmy Carter appeared staggered by the action and unable to respond, which only emboldened the Iranians. They ended up holding the Americans hostage for four hundred forty-four days. Only releasing them on the inauguration day of President Ronald Reagan, taking one last humiliating shot at Jimmy Carter.

Starting with the taking of our embassy, America was subsequently humiliated by Iran for a year and a half on the world stage, over and over again. Marching our blindfolded diplomats around for all to see they taunted and insulted America. The ruling mullahs called the United States a “paper tiger”, unable to do anything in retaliation. A seemingly valid argument considering the failed hostage rescue attempt less than a year later, which ended in tragedy in the Iranian desert and cost eight American lives.

Over the years since, Iran has remained at war with the U.S., using their proxies to attack our embassy in Beirut in 1983 killing seventeen Americans and wounding many more. Iran was behind the attack also in 1983 on the U.S. Marine barracks outside of Beirut killing another two hundred forty-one American Marines, Sailors, and Soldiers. The worst one-day death total of American military personnel since the Tet Offensive in South Vietnam in 1968.

Including their support for the Iraqi insurgency which cost countless American lives, since forcing the Shah out of power the Iranians have been responsible for the deaths of more Americans than any other terrorist organization in history. At least until Al Qaeda’s 9-11 attacks. A record of hostility unrivaled by any of our other adversaries.

In June of 2009 young Iranians again took to the streets of Tehran, this time to protest the ruling government’s oppression of the Iranian people. As President Obama and Secretary of State Hillary Clinton stood by and watched, the Iranian protests were crushed by the Republican Guard. The United States did nothing either overtly or covertly to help the Iranian people, and an opportunity to change the dynamics of Iran and the entire Middle East was lost.

Fast forward to today and we find an Iran which has violently crushed its’ own internal opposition, expanded its’ interests into Europe and the Western Hemisphere, has a robust nuclear weapons program, and is still supporting anti-American terrorist organizations around the world.

What does the future hold for Iranian – U.S. relations ? Considering the Obama Administration’s weak negotiating posture led by Secretary of State John Kerry, the future doesn’t bode well for the U.S. Without a clear and firm message being sent to the Iranian leaders that a nuclear Iran will not be tolerated, the U.S. will soon find itself dealing with a much more dangerous adversary, one which will also pose much more of a threat to the Middle East and the rest of the world.

Will our ally Israel out of self-preservation feel forced to attack Iran to try to destroy their nuclear ambitions ? And what will be the Obama Administration’s response, considering their thinly-veiled hostility towards Israeli Prime Minister Benjamin Netanyahu ? Iran has threatened to unleash attacks against the U.S. and U.S. interests world-wide should Israel attack. Based on Iran’s history I think their threats should be taken seriously.

With the current lack of leadership in Washington, our Iranian enemies will look to enhance their negotiating positions and take advantage of a weak America. Look for Iran to use the next two years before Obama leaves office to take advantage of that weakness, and to create as much advantage for themselves as they can. Using subterfuge, deceit and dishonesty.

Hopefully this time the cost to America won’t be as high as it was in 1979, under another very weak and incompetent administration.