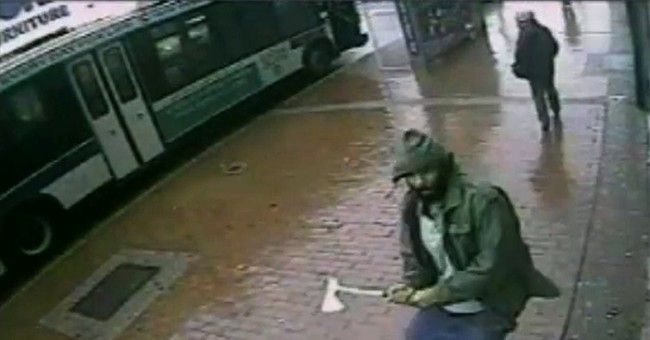 As the news media and politicians pontificate about the threat from ‘lone wolf’ terrorists one thing has been missing from their comments. What normal Americans can do to help protect themselves and the nation. Perhaps it’s time we take a look at what each citizen can do to help respond to this threat since you won’t hear it from the politicians, they haven’t a clue what to do.

We have seen recently that terrorism will continue to increase around the world, and unfortunately also attacks right here in the Continental U.S..  It’s also becoming apparent that soft targets have become the target of choice among terrorist groups. It’s where they can get the most ‘bang for their buck’. We’ve also seen evidence that traditional criminal organizations have increased their cooperation for profit with terrorist groups. And unfortunately more restrictions such as with air travel will be placed on Americans as authorities scramble to respond to the threat.

What can the typical American do ? The short answer is ‘train each other to recognize and report suspicious activity’. It’s time to get our heads out of the sand and focus on assuming personal responsibility for you and your neighbors well-being.

Just as with the 9-11 hijackers, suspicious activity is often recalled after a terrorist event. We have to train ourselves to be on the lookout for things that are out of the ordinary and arouse suspicions BEFORE an event occurs.

Keep in mind, those who commit terrorist acts usually live right among us without appearing suspicious while planning and preparing for their attack. They may be your neighbor, a student or even a ‘friend’. (Indications are that as many as several hundred US citizens may have had contact with Islamic State jihadists in Syria.) Often they will need training or equipment that will arouse suspicion. And they will almost always need to conduct surveillance on possible targets and gather information on the planned attack location before committing an attack.

Learn to recognize the difference between normal and abnormal behavior. It can be a very fine line. Stay alert in your daily routines and get to know who your co-workers are, who regularly makes deliveries in and around where you work. Staying alert is NOT about becoming paranoid, it’s about being aware and acting on suspicions.

Stay alert for indications of possible trouble. Previous illegal, questionable activity or crimes could be ‘probing acts’ at the target site. Or someone engaging in radical, extremist discussions at work could be an indication of future plans. Or suspicious thefts from the workplace, particularly missing work uniforms or work ID’s.

It is impossible to identify a terrorist simply by their appearance, nationality, or language. You can only identify a terrorist threat by observing or hearing about suspicious activity that may lead to a criminal act. Identifying suspicious activity is not a difficult science. Rely on your judgment. Your suspicions will need to be based on your experience, judgment, and common sense. When in doubt go with your ‘gut instinct’. Many times it’s correct.

For example, someone displaying unusual Interest in Symbolic Targets. Maybe you are at a National Monument and you notice a person nearby taking several photos. Nothing unusual about that, unless that person is only taking photos of the locations of surveillance cameras, entrance crash barriers and access control points, and security procedures. Is that normal activity for a tourist? Some things should cause a heightened sense of suspicion, particularly unusual interest in ‘security precautions’ at a particular location; surveillance activities at different times of the day or night; inappropriate photographs or videos; note-taking and drawing of diagrams; or using night vision devices.

Unusual or suspicious activity does not necessarily mean that terrorist activity is happening, but people should be aware of certain behaviors such as individuals acting furtively and suspiciously, trying to hide what they are doing; individuals avoiding eye contact; individuals departing quickly when seen or approached; individuals in places they don’t belong; or over dressed individuals for the type of weather. People normally don’t wear a heavy winter overcoat to a summer baseball game.

Fake ID’s aren’t only used by minors trying to purchase alcohol. Many of the 9/11 terrorists were in the country illegally and using fraudulent IDs. Altering or using false government identification in any way and for any purpose is against the law. If you believe someone is using or has altered government identification, please notify law enforcement authorities right away.

Terrorists, when not acting alone, need to meet with their conspirators and often times work within a cell. Pay attention to visitors and guests that arrive and leave at unusual hours, or try not to be noticed. Parking a vehicle an unusual distance away when there are closer parking spaces might merits a closer look. Not all people who maintain privacy are terrorists. But people intent on doing illegal acts try not to attract attention and want to be left alone.

Additionally, suspicious packages, luggage, or mail that have been abandoned in a crowded place; or unauthorized people entering or exiting a secured, non-public area. Any type of activity or circumstance that seems curious or unusual within the normal routines of your workplace. Recruiters and Human Resources employees should be alert for unusual employment applications. Don’t assume it couldn’t be an inside job !

So what should you do ? If you see suspicious behavior, do not confront the individuals. Report the incident or circumstance right away to the police. You can try using this simple guide to help you keep track of what information is important:

All of these things make terrorists more vulnerable to detection by those who have trained themselves to be more aware of suspicious activities.

Remember, what we may consider as suspicious activity may simply be innocent acts that are being misunderstood, or taken out of context. Does that mean you don’t report it ? Not at all. Let the police investigate and determine whether it’s criminal or terrorist activity, or simply a misunderstanding.

Much of this information is available from the Department of Homeland Security and other resources. The information provided certainly isn’t all-inclusive. But it will help people in developing their own skills and powers of observation. People need to take the time to better educate themselves on what they can do to help prevent attacks, and to protect the United States of America.