Where Are the Angry White Folks? 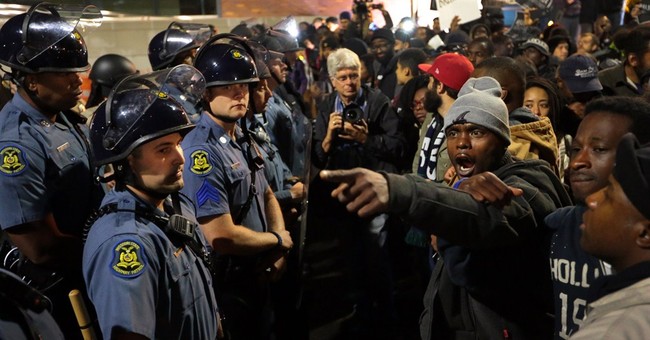 As the mid-west community of Ferguson continues to experience turmoil over the shooting of black 18-year-old Michael Brown by white police officer Darren Wilson, with even worse expected once the Grand Jury releases its’ finding clearing Officer Wilson, the question that comes to mind is ‘where are the angry white folks’ ?

The subsequent rioting and demonstrations have not been about Michael Brown since that very first day after his death at the hands of Officer Wilson. A peaceful protest and search for information and an understanding of what happened quickly morphed into riots directed and choreographed by outside activists.

Rioting that had little to do with “justice for Michael Brown”, and much more to do with a ‘black victimhood’ agenda pursued by dishonest politicians, New Black Panthers preaching violence against white people, and liberal white folk still struggling with the issue of slavery they feel compelled to apologize for one hundred and fifty years (and hundreds of thousands of lives) after the fact.

All this fueled by race hustlers like Al Sharpton, Jesse Jackson, and Attorney General Eric Holder, President Obama’s hand-picked emissary to help organize the groups into a larger movement.

But where are the angry white folks ? Why aren’t they out protesting on the streets of Ferguson and St. Louis ? Why haven’t Ferguson’s white folks bussed in outside agitators to fire up the crowds with stories of black on white crime ? (Which by the way far, far exceeds any incidence of white police officers unjustly shooting black males.)

For sure white folks can get angry enough to protest. We saw this with Tea Partiers who came out to express their displeasure with the Obama Administration’s plans to implement the Affordable Care Act. They raised their voices against the bill, and shouted at the elected representatives during town hall meetings across the country when it was being debated. Angry, but no rioting.

But protest about racial violence and the rioting in Ferguson ? Not going to happen. Angry white folks will quietly seethe about the destruction of the community. They’ll say “tsk, tsk, someone needs to do something about this”. They’ll park their cars in the garage overnight instead of leaving it out on the street. And when they get scared they’ll call the police to come and reassure them. But they won’t stand up for justice for Officer Wilson. Oh, among themselves in hushed tones they’ll say the police need to start shooting the rioters. They might even post a few strong comments or pictures on Facebook. But that’ll be the extent of it.

They surely won’t publicly demand that the rioting be brought to an end and order restored, by whatever means necessary. They won’t get angry enough to confront the rioters. They’ll just bolt the doors a little tighter, and hope and pray the violence comes to an end without touching their lives.