Dr. Patrick Moore
|
Posted: Apr 14, 2019 12:01 AM
Share   Tweet
The opinions expressed by columnists are their own and do not necessarily represent the views of Townhall.com. 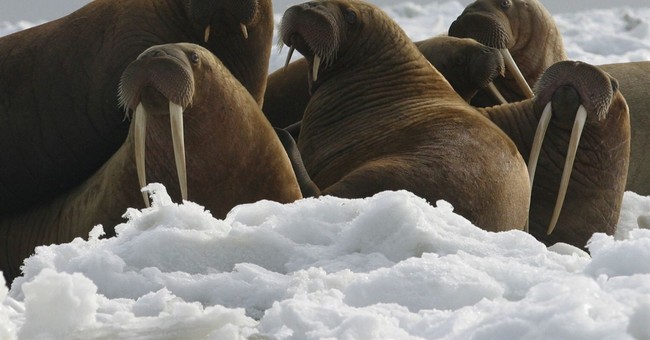 Editor's note: This column was co-authored by Dr. Susan Crockford.

Netflix has recently premiered their new eight-part series titled Our Planet, with narration from the inveterate David Attenborough. One particularly grisly scene of walruses falling to their death from a high cliff in northern Russia has caused shock and revulsion among many viewers. It has also raised serious questions about the truth of a number of claims made in the documentary, in particular the claim that “climate change” is responsible for the deaths.

Other questionable claims include that a huge walrus herd ended up on a beach because there was not enough ice for them in the sea, and that they fell from a cliff due to poor eyesight. However, this was not the first year that large herds of walruses used beaches for hauling out during the early Fall.

There are extensive historical records of walruses hauling out in huge herds, up to 60,000, all across the Arctic. These observations date back to the 1930s and the 1970s, when there was extensive ice cover throughout the region. This behavior is clearly natural and seems strongly correlated to peaks in overall population size, which decline again as food resources are depleted.

Netflix seems unwilling to precisely identify the site, or sites, that were included for the walrus herd in their film or to specify exactly when the cliff incident occurred. The circumstances of the event are eerily similar to a mass death involving walruses falling from a cliff in northeastern Russia, reported in The Siberian Times on October 19, 2017.

The report is very clear in attributing the incident to a pack of at least 20 polar bears approaching the walruses. This caused panic among the walruses, resulting in a few hundred of the approximately 5,000 mammals falling to their death. The bears then feasted on the carcasses. This is as natural an event as lions taking down Cape buffalo in Africa or American Indians driving bison over cliffs at buffalo jumps.

The event was witnessed by Viktor Nikiforov, Head of the WWF Polar Bear Patrol, who was quoted stating, “The walruses were obviously frightened by the predators, panicked and fell from the top to their deaths.”

However, walruses have also been known to fall off cliffs without the presence of polar bears. In some instances, lack of sea ice could not possibly have been a factor, such as at Cape Pierce, Alaska, during the 1990s.

It is ironic that activists have long insisted that polar bears are endangered by loss of ice caused by human-caused climate change. In fact both polar bear and walrus populations have increased dramatically in recent decades due largely to restrictions on hunting. The Inuit government of the northern Canadian territory Nunavut recently received a report from their committee stating that polar bears are now overpopulated in the Arctic.

The people of Ryrkaypiy, the town on the Russian coast where the incident occurred, have also been besieged by polar bears in recent years. A 2016 survey of polar bears of the Chukchi Sea, where Ryrkaypiy is located, showed they are healthy and reproducing well.

Walrus populations have grown to such an extent that many coastal haul-out locations are overcrowded, as they were in the 1970s before the population crashed. It is clear that modern-day sea ice changes, which have so far not exceeded similar changes over millions of years, have not been detrimental to the populations of these Arctic species.

Indeed, the US Fish and Wildlife service determined in 2017 that the Pacific Walrus “Does Not Require Endangered Species Act Protection” for any reason, including reduced sea ice extent. The 2007 prediction that two-thirds of the world’s polar bears would disappear when summer sea ice declined dramatically has obviously failed.

The dire predictions of climate change activists have so often been proven wrong that to just automatically give them credibility is folly. Predictions that we “only have 10 years left” began in 1989 and have continued unabated ever since, now culminating with Alexandria Ocasio-Cortez’s dire warning that the “The world is gonna end in 12years if we don't address climate change.”

To the contrary, NASA has recently demonstrated conclusively from satellite records that our CO2 emissions are greening the Earth. This has resulted in higher yields in agriculture and forestry, and more efficient use of water by vegetation generally. In fact, there is nothing occurring in weather or climate today that is anywhere near out of the ordinary with the past 10,000 years of this Holocene Interglacial Period.

It is galling that David Attenborough often finds multiple opportunities in his narrative to blame human-caused climate change for situations that are perfectly natural. Even if there were no polar bears involved it would not be justified to blame falling walruses on climate change.

In order to clarify this particular allegation further we call on Netflix to immediately identify all locations used for the walrus segment and the precise details of each shoot, including dates.

It is shocking enough to present such a gruesome incident to the general public without making them feel personally guilty for driving their cars or blame energy companies for CO2 emissions.

Dr. Susan Crockford is a Canadian zoologist specializing in evolution and the ecology of Holocene mammals, including polar bears and walrus. She is currently an adjunct assistant professor at the University of Victoria.

Dr. Patrick Moore serves as the Chairman of the CO2 Coalition, Co-Founder & 15-year leader of Greenpeace (1971-1986), Chairman and Chief Scientist for Ecosense Environmental.