Drew Johnson
|
Posted: Jan 29, 2020 12:01 AM
Share   Tweet
The opinions expressed by columnists are their own and do not necessarily represent the views of Townhall.com. 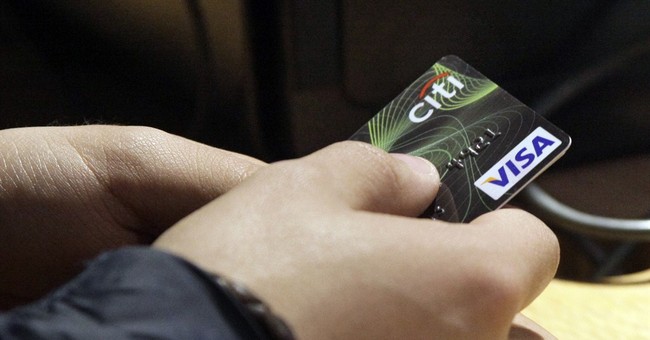 An alliance of retailers and independent debit card networks has invented a lobbying group aimed at funneling consumers’ money to its members, while ruining credit cards for millions of Americans.

The outfit, known as the “Secure Payments Partnership,” claims it supports “greater security” and “innovative solutions and payment systems” for credit card users. What the group really wants is for Congress to install more regulations and government control over credit card payments.

Small, regional payment processing companies that use dated and dying PIN-based networks have joined the Secure Payments Partnership in an attempt to strong-arm Congress into requiring old-fashioned personal identification number (PIN) security codes for all credit card purchases. By getting the federal government to force transactions to run through their networks, these failing businesses believe they can generate more revenue.

The Secure Payments Partnership’s other members, retail lobbying groups like the National Retail Federation, the National Association of Convenience Stores, and the National Grocers Association, want Congress to strengthen socialist-style price controls on credit card companies. This would allow their members, including grocery stores and big-box retailers, to keep more money while forcing credit card companies to strip options and benefits for consumers.

If the organization’s lobbying efforts are successful, Americans will be forced to choose from fewer credit cards, wait in longer checkout lines, and face the elimination of airline miles, hotel points, cash back rewards, and other credit card benefits. To make matters worse, most financial transactions will be no more secure than they are today.

There has been a global movement away from requiring credit and debit card customers from using PINs during transactions.

Until recently, PIN transactions were the norm throughout Europe. But the need to speed up checkout times, as well as the rise of contactless financial transactions – both through credit card and cell phone – that do not require the input of PINs have PIN-based payments less common.

Here in the United States, nearly 80 percent of debit card transactions do not require a PIN or signature. According to the Federal Reserve, two out of three American merchants are not even equipped to accept PIN transactions.

If the Secure Payments Partnership is successful in mandating that all retailers require customers to input PIN codes during purchases, the cost to American businesses is estimated to exceed $4 billion – even though PIN codes are only successful at preventing the use of lost or stolen cards, which accounts for roughly 10 percent of all credit and debit card fraud.

Perhaps most damning to the future of PIN transactions is the fact that they provide no protection against fraudulent online purchases. That’s not great news since e-commerce is expected to make up 30 percent of all retail sales in the United States by the end of the decade.

Requiring PIN codes on credit card transactions has no clear benefit. It would slow down transactions and cost merchants billions of dollars, while doing almost nothing to prevent fraud or increase security. In fact, the only people pushing for PIN requirements are the struggling PIN-based networks that still manage to make money pushing financial transactions through archaic, unnecessary PIN systems.

It’s as absurd as candle makers begging the government to require homes to rely on candlelight years after the invention of electric lightbulbs.

In addition to helping antiquated payment networks survive by pushing for federal mandates that ignore biometric authentication and secure encryption in favor of static four-digit PIN technology developed in the 1960s, the Secure Payments Partnership also wants to take all of the fun out of credit cards.

If the organization gets its way, credit card companies’ revenues will be slashed by the government. As a result, the roughly $40 billion that consumers reap annually from credit cards in travel rewards, cash back bonuses, and other incentives will be a thing of the past – as will most fee-free credit cards. Retailers may make a few extra dollars by paying less in credit card transaction fees, but customers will likely pay more in the long run.

Over recent months, the Secure Payments Partnership has been holding Capitol Hill briefings and poured money into digital marketing efforts designed to encourage lawmakers to enact ridiculous regulations to benefit its members. But despite a slick website and a presence on a number of social media platforms, the Secure Payments Partnership doesn’t seem to be gaining much traction.

As of January 27, SPP’s Facebook page had fewer than 50 follows. The group’s 120 Twitter followers are a who’s who of retail PR lackeys and debit card network lobbyists. That should be a strong indication that Americans don’t want Congress to make rules that allow small and outdated PIN-based networks and greedy retailers to rake in money off of the backs of credit card customers, while doing nothing to actually make credit card transactions more innovative or secure.

It’s time for the Secure Payments Partnership to be honest about what it wants: More regulations so its members can make more money, while American consumers pay the price.

Drew Johnson is a columnist and government watchdog who serves as a senior fellow at the National Center for Public Policy Research.