Douglas MacKinnon
|
Posted: Feb 24, 2018 12:01 AM
Share   Tweet
The opinions expressed by columnists are their own and do not necessarily represent the views of Townhall.com. 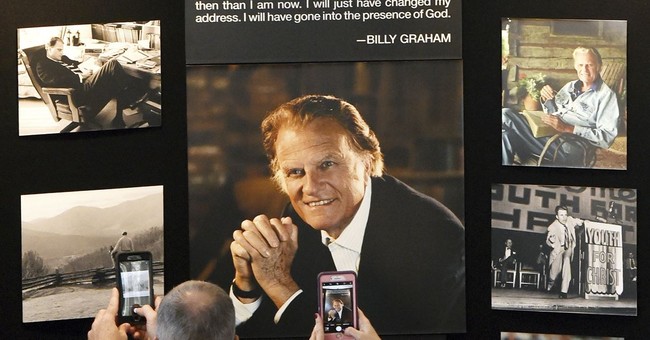 Back in the early 1990s while working as an official in the Pentagon, I had the high honor to meet and chat with the Reverend Billy Graham.

That one meeting lifted my faith like none before or since.

To look into the eyes of Billy Graham was to see an incredibly humble servant of the Lord who only wanted his fellow human beings to know the love, faith, joy, peace, and forgiveness of Jesus Christ.

I, for one, do happen to believe Billy Graham was touched by the hand of God.

He truly only wanted happiness and everlasting life in Heaven for all he met.

That is why it is so disturbing, vile and obscene to witness the Pandora’s box of pure evil some on the left have opened to not only try to smear the reputation of Billy Graham, but to desecrate his memory.

It is useless to ask these offenders: “Have you no shame?”

Much of the unhinged hate targeted at the reputation of Billy Graham started minutes after his passing.

The crescendo of unbalanced loathing then building by the second to the point where even The Washington Post got into the act by attempting to not only smear Billy Graham, but his children.

Such hate cries out for the love of God.

For over six decades, the Reverend Billy Graham touched tens of millions of people all over the world as he sought to spread the word of God.

No matter their faith, lack-of-faith, nationality, race, color, or even sexual orientation, Billy Graham spoke to them in ways which truly brought inner peace for most and a reawakening of faith for millions.

Since 1948, the Gallup Organization listed Billy Graham as one of the ten most admired people in the world at least fifty times. More than any other person in history.

This is the man so many on the left and so many in the mainstream media now choose to savage?

Since his passing, most on the left who have outrageously attempted to smear the memory of Billy Graham have literally expended more words to do so than any negative commentary they have posted regarding the world’s most murderous dictators or most barbaric terrorist organizations.

What does that say about them and their utter lack of decency and perspective?

Over the years, much of the mainstream media, entertainment, and academia has been ceded to those on the left and those with little or no true faith.

Liberal groupthink and unchallengeable political correctness has become the religion for many in these powerful arenas. Its official language being denunciation of any and all who do not worship at their secular and twisted altar.

Billy Graham, his life, his messages, his goodness, and his deep and unwavering belief in God should be celebrated for the positive and lasting effects they have had and will continue to have upon this earth.

All those who knew or were touched by Billy Graham need to rise as one to defend the name of a man who simply wanted his fellow human beings to know God and everlasting life in Heaven.

This world was blessed to have him walk its surface for over 99 years.

Goodness will eventually triumph over evil and to quote Billy Graham:

“Someday you will read or hear that Billy Graham is dead. Don’t you believe a word of it! I shall be more alive than I am now. I will have just changed my address. I will have gone into the presence of God.”

Matt Vespa
A Woke VA Prosecutor Ropes in High-Priced Lawyers for Her Appeal Case, But Who's Paying for Them?
Matt Vespa