The Far-Left Destroys A Rodeo Clown 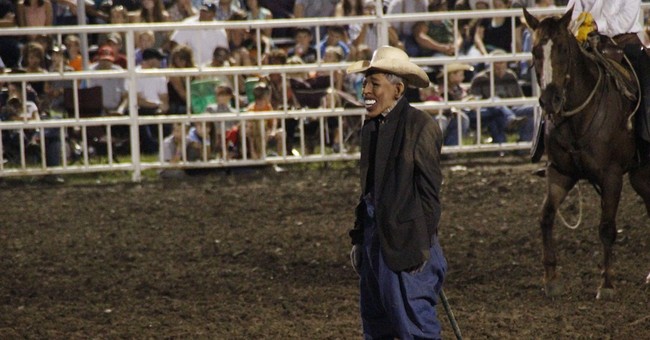 Much of the liberal mainstream media is now in a complete meltdown because a rodeo clown wore a mask of President Obama and “disrespected” him during a show at the Missouri State Fair. Try as I might, there is no way to exaggerate how unhinged much of the media – and all the Democrat politicians in the area – have become over this one incident.

Was it childish and in bad taste? Sure. Are there one million things much more pressing and threatening for the media and the Democrats to be concerned about? Commonsense and the American people would say “yes.” Craven partisan politics says “let’s pile on to accumulate brownie-points with the far-left Intelligentsia.”

Hence, the calculated but selective meltdowns.

For instance, in the movie “Colombiana,” we are treated to a scene which takes place in the office of a weasel-like official from the U.S Government. Behind him is a large and glowing picture of President Obama. Suddenly, a would-be assassin’s bullet screams into the office, misses the weasel, and slams into a photo. Not the glowing and commanding photo of President Obama of course, but rather a photo of George W. Bush with the weasel.

Transparent, sophomoric, and a unnecessary distraction from the plot, but oh, how the makers of this failed movie must have slapped themselves on the back with that deliberate insult to Bush while awaiting the accolades from the liberal-elites on the coasts.

After the movie came out, I don’t remember anyone from the mainstream media rushing to the defense of George W. Bush and demanding an apology from or a boycott of, Sony Pictures.

Maybe I don’t have a firm grasp of infantile insults, but surely an assassin’s bullet shattering a photo of George W. Bush (hint, hint) is worse than a rodeo clown wearing a mask of Barack Obama running from a bull while someone shouts “This bull’s gonna get ya, Obama. He’s gonna get ya.”

Apparently not. While all those responsible for “Colombiana” paid no price for their insult of Bush, the poor – in every sense of the word – rodeo clown has been banned for life by the Missouri State Fair. Banned for life with the real possibility of having his only livihood taken from him forever.

Beyond that, the president of the Missouri Rodeo Cowboy Association resigned under massive pressure because he served as the announcer during the rodeo clown’s “inappropriate, disrespectful, and embarrassing” performance.

You would think the rodeo clown potentially losing his career and the president of the association resigning would satisfy the bloodlust of the far-left. Not even close. Many also want to strip the State Fair of its tax money, while demanding full-scale investigations.

So much for the First Amendment. As one state-fair attendee said, “Since when has making fun of the president been off-limits?”

The only way this meltdown from the media and the democrats (and a few Republicans looking to cash in) makes sense is if national unemployment is under five percent, Obamacare turns out to be the cure-all advertised by the White House, the trillions in unfunded public-employee pension liabilities destroying our very economy have been magically balanced, our borders are secure, education (even for Matt Damon’s children) has finally been fixed, and the threat of terrorism has been eradicated forever.

Otherwise, doesn’t the mainstream media and these “me-first” politicians have many more critical issues to concern themselves with than driving a rodeo clown into poverty?