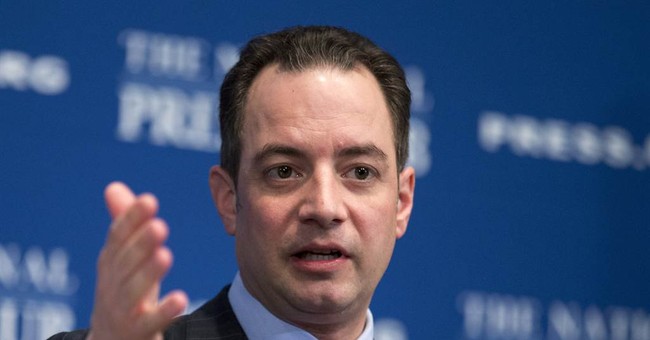 Message to Republican National Committee chairman Reince Priebus: You are right to complain about the upcoming "Canonize Hillary Clinton" media events on NBC and CNN. You are wrong to address your complaints to the heads of those networks.

Asking most of the mainstream media not to -- unethically -- support and promote liberal candidates is like asking a scorpion not to sting. It's just never going to happen. Get over it and attack the bigger problem instead.

A bigger problem which just manifested itself this week with the sale of The Boston Globe and the Washington Post to mega-wealthy liberal advocates, with far-left Red Sox owner John Henry buying the Globe and at least socially liberal Amazon founder Jeff Bezos buying the Post.

So if not the liberal NBC Entertainment Chairman Robert Greenblatt and the equally liberal CNN Worldwide President Jeff Zucker -- and both men most certainly have the right to be liberal, but not the right to put their thumb on the media and entertainment scale to promote ideological political soul-mates -- who should RNC chairman Reince Priebus be directing his fire at?

Priebus should instead call out ultra-wealthy conservatives who do believe in traditional values and who do believe our nation is being destroyed from within by the ALL-Government polices of the far-left and who yet refuse to become players in either the media or entertainment business.

Two "information" spaces which vilify corporate America, the United States, and faith on a regular basis and often have a negative impact on the bottom-line of said ultra-wealthy conservatives who ignorantly twiddle their thumbs on the sidelines.

My old boss and political statesman former Sen. Bob Dole, R-Kan., and I talked about this subject a number of times in the past. He, like me, was perplexed why conservatives -- and especially conservatives with means -- ceded the media, entertainment, and educational fields to the far-left so many years ago.

Senator Dole believed conservatives paid a high-price for this miscalculation and it's only gotten worse since he and I last discussed this subject a few years ago.

The far-left Boston Globe was sold to liberal businessman John Henry for about $70 million. For many ultra-wealthy Americans who do strongly espouse traditional values, $70 million is little more than a rounding error. Some of these conservative billionaires have the GDP of small nations but will still not risk pennies on the dollar to purchase media or entertainment outlets which mock their beliefs while pushing socialist agendas.

This is not to say that a conservative should have stepped in to buy the Boston Globe or Washington Post and turned them into the propaganda machines for the far-right. To do so would be just as unethical and corrupt as what much of the mainstream media has practiced for the last number of decades.

No, the idea here would be to simply purchase one of these media outlets at now fire-sale prices and turn it into an actual honest broker of the news. If one could buy one of these top 25 newspapers and then demand and enforce a policy of only non-partisan, fact-based newsgathering, our nation and those who believe in traditional values would benefit immediately.

RNC Chairman Reince Priebus can continue to act like a little boy threatening to punish the other kids by taking his bat and ball home (or in his case, threatening to pull the GOP presidential debates from NBC and CNN, which most likely had Greenblatt and Zucker laughing out loud), or he can start to publicly put some ultra-wealthy conservatives (donors or not) on the spot.

That, or continue to suffer the consequences of liberal entertainment and media scorpions stinging conservatives and their values into oblivion.