What Is Happening to Rush Limbaugh Matters 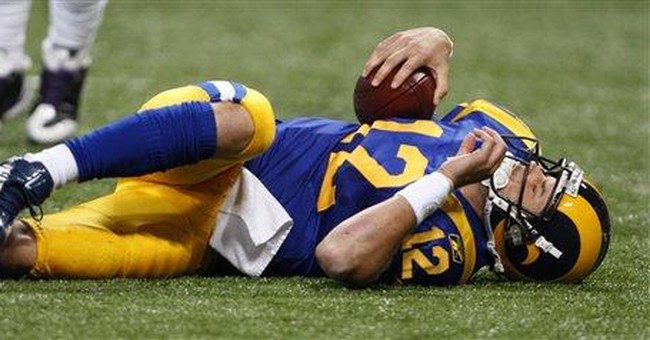 It appears that the purveyors of political correctness and the ignorant or hate-filled on the far-left are about to exact their revenge against Rush Limbaugh. With the majority of the liberal mainstream media in their enraged and partisan corner, they are about to browbeat, threaten and even blackmail the required number of cowardly NFL owners needed to reject Limbaugh’s bid to purchase the St. Louis Rams.

Congratulations to all involved in this witch hunt. With this one act of purely partisan-driven retribution, they have highlighted exactly why so many Americans fear freedom of speech and individual liberties may soon be a thing of the past. Liberal groupthink is on the way and let the character assassination aimed at Limbaugh serve as a warning to all those who dare to question the nanny state. From the Ivory Tower of the liberal intelligentsia, we can almost hear the screams of “Just as we know the Sun revolves around the earth, we know that same earth has warmed over the last decade. Agree with us, heretic, or be prepared to be burned at the stake.”

What was Limbaugh’s crime? He had many, apparently, the most unforgivable of which being the fact that for the last two decades, he has been the most powerful and most listened-to voice on the right. For that alone, the far left would like to see him deported from the country or deposited in a dark, dank dudgeon. Beyond that, the flimsy excuse used by the handmaidens of the left to deny Limbaugh an ownership stake in the St. Louis Rams is the fact that in 2003, he dared to offer his opinion. As we have come to learn, as far as the liberal elite is concerned, freedom of speech exists in this country for them alone. Conservative opinion needs to be denied, devalued, or attacked wherever and whenever it makes itself known in high schools, the college and university level, media, entertainment or even sports.

In 2003, on ESPN’s Sunday NFL Countdown -- a show in which Limbaugh was being paid and encouraged to offer sometimes controversial opinions -- he had the temerity to offer one and state that he believed that for politically correct reasons, some in the sports media were reluctant to criticize Donovan McNabb of the Philadelphia Eagles because he was an African-American. Agree with Limbaugh or not, that was his opinion. It was his right to offer it.

I happen to believe that McNabb is an incredibly tough, gifted and battle-tested quarterback. That said, I also happen to believe that Limbaugh was right to point out that for politically correct reasons, some sports reporters -- the vast majority of whom now lean left in their political and social beliefs -- may have wanted McNabb to succeed for reasons beyond the football field.

No matter; only seconds after that remark by Limbaugh in 2003, the liberal media, Jesse Jackson, Al Sharpton, and the left-leaning ESPN, decided that Limbaugh had to go. Flash ahead to 2009, and we have the far-left Keith Olbermann -- a man who has said enough vile things about conservative Americans to fill a phone book -- doing weekly commentary for NBC’s Sunday Night Football package. No problem there as far as the left is concerned.

Beyond the corporate censorship against Limbaugh that is being orchestrated by a number of interconnected interest groups from the left, there is something just as insidious going on. Something the far-left has bet conservatives are powerless to stop…or replicate. That being the threats against conservative or independent commentators and the intimidation of advertisers who are associated with such programs or outlets.

Three cases in point being Glenn Beck’s program on the FOX News Channel, Lou Dobbs on CNN, and the nearly advertiser-empty pages of The Weekly Standard run by William Kristol. With pitchforks and torches in hand, the far-left has been working overtime to threaten advertisers on the Beck program or with FOX, have gone viral with a petition to have Lou Dobbs fired from CNN, and have made sure that advertising money does not find its way onto the pages of The Weekly Standard.

As this blacklisting, intimidation, and censorship of free speech takes place, the mainstream media remains mostly silent. As an ally of those who would attack Limbaugh, Beck and Dobbs, they see no reason to criticize what they decades before, referred to as “Un-American” activity.

Advertisers can run in any far-left publication or newspaper without fear as they know conservatives not only can’t or won’t employ the tactics of the left, but don’t have the media in their pocket to makes such threats stick. From Limbaugh to The Weekly Standard, those on the left who seek to expunge dialog, transparency, facts, and basic American liberties, feel they are easily winning the battle.

As they seek to crush Limbaugh, Beck and Dobbs, who or what is next?