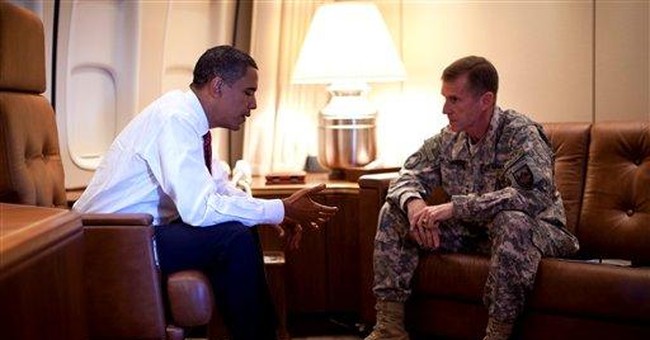 Simply because he spoke out in the best interests of his troops and our nation, the liberal intelligentsia, certain White House aides and some Democrat Members of Congress are trying to discredit and disparage General Stan McChrystal as fast as yellow journalism will allow.

What sin did this highly decorated patriot commit? As commander of U.S. and allied forces in Afghanistan, he dared to publicly speak his mind in the age of Obama. For that, those who worship at the feet of the Oracle of the Oval Office have told the General to “shut up,” have referred to him as “General MacArthur,” and have called for him to be drummed out of the military.

In conjunction with this, and as one who deals with the media on a regular basis, I received several calls from reporters who know me and know that I’m also a novelist. They each asked me basically the same question: “Did you send or do you think General McChrystal has ever read your novel ‘America’s Last Days?’”

The novel imagines a revolution from within our nation orchestrated by the former Chairman of the Joint Chiefs of Staff and the former Director of the FBI, two men who believe that the United States is in a death spiral from which it won’t recover. Two men who believe that in order to preserve traditional values and safeguard and honor the sacred documents handed down by our Founding Fathers, they would have to act before the incoming far-left president accelerated the downfall of our republic.

With regard to the question posed by the reporters, I assured them that not only had I never sent General McChrystal a copy of my novel, but that I was sure he’d never even heard of it or me. With his immense and growing responsibilities, reading commercial fiction has to be at the bottom of his to-do list.

That said, and before the far-left comes after me yet again for “fomenting revolution,” let me remind them that “America’s Last Days” is FICTION, that it was a best-seller, was blurbed by serious people from both sides of the political divide, and examines the incendiary subject of revolution from within in a way that gives voice to all sides.

Going back to the topic at hand -- that being when, how, and if, members of our military can state their opinion -- I have often been asked what I found most rewarding about writing the novel. The answer is easy. Getting hundreds of emails from men and women in uniform -- officers and enlisted -- who not only thanked me for articulating some of their fears for our nation but also admitted that they were apprehensive about stating their opinions in writing.

How ironic and tragic. These heroic young men and women fight every day for our liberties -- with one of the most precious being free speech -- and yet they are fearful of speaking their minds.

Civilian control of our military is paramount. This control rightfully establishes the President as the Commander in Chief. That control and authority, however, do not preclude General McChrystal or any other member of the military, from speaking out or offering their best judgment. Up and until the President and our civilian leadership have firmly fixed and settled on a policy or war decision, our men and women in uniform have the right to speak on the subject, answer questions on the subject or write on the subject.

As President Obama and his team are far from a decision, General McChrystal has done nothing wrong. Once this President -- or any President -- makes a firm decision that affects our military, it’s incumbent upon our military leadership to either follow orders, or, if they find such orders to conflict with their principles, to resign.

General McChrystal is not a politician. He is a war-fighter in service to our nation. Unfortunately for him, because a private discussion of his was leaked and he truthfully answered some questions in public, his name, service, and sacrifice are being tarnished by some on the left who hate all he represents.

How much better if those liberals targeting General McChrystal turned their time, energy, anger, and considerable resources against the terrorists the General and his troops are trying to vanquish. We’d all be better for the effort.