A Speech For McCain 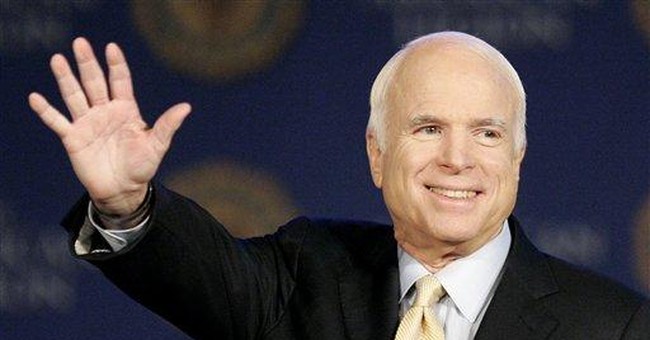 After tens of conversations with “non-political” Americans living outside of the poisonous echo chamber that is our Nation’s capital, I offer up this draft speech:

“Thank you for that warm welcome. I’m greatly honored to be here tonight.

As an American and as a Republican, I am fond of quoting one of our greatest patriots and presidents – Abraham Lincoln. During one of the most trying times in our nation’s history, Mr. Lincoln said, ‘If you once forfeit the confidence of your fellow citizens, you can never regain their respect and esteem. It is true that you may fool all the people some of the time; you can even fool some of the people all the time; but you can’t fool all of the people all the time.’

As we all know, there is a growing perception in this country that political campaigning is now more about fooling some of the people than it is about honesty, integrity, and trying to figure out how best to solve the very serious problems that plague our citizens and threaten the national security of our nation.

Let’s face it. Somewhere along the line, the message has been badly twisted and all but obliterated by a political process that needs an immediate and forceful overhaul. This election is not now, and never has been, about mindless statistics, slick sound bites, or hollow rhetoric.

This election has to be about the welfare of our people and the very future of our Republic.

Those of us who are involved in running for the highest office in the land – from the candidates, to the campaign staffs, to the media advisors – have, in a very real sense, become slaves to the limitations imposed upon us by the twenty-four hour media. We are being held hostage by an “instant messaging” mentality that only serves to deprive the American people of much needed information.

Twenty years ago, a presidential candidate may have gotten a minute or two to relay his or her message on the nightly news. Today, he or she has eight seconds if lucky. And even less if you’re a conservative.

I’m sorry, but that just won’t cut it. If we allow the principles of freedom, prosperity, and tolerance to be boiled down to the size of a bumper sticker, then shame on us. In an age of expanding terrorism and a world spiraling further into chaos, eternal vigilance demands more than a passing reference.

I believe, that with the presidential election of 2008, you -- the American voters -- are being asked to make the most important political decision of your lifetimes. Such a decision demands information, clarification, stark comparison, and a deeper understanding of the candidates and their stands on the issues. Issues that could impact every part of your lives. Such a scenario calls for a direct and honest message unfettered by censorship, interpretation, or bias attack.

Understanding that, part of my message today is that it’s about time we gave the election process back to those who it’s really intended for – you, the American people.

Today, let us make a pact that from this moment forward, we will do something that is perceived as all too rare these days – let us agree that we need to listen to the American people.

That’s all. That’s the common ground I seek. Not too tough. Let’s just listen for awhile. Together, let us hear their hopes, their dreams, their fears, their problems and most of all – let us hear their solutions to the mounting obstacles they fight to overcome.

It’s so very easy to get caught up in the three-ring circus that is a presidential campaign and forget that this election has to be about having a serious and ongoing dialog with the American people. At the end of the day, every candidate for any office in the land must understand that we answer -- and must remain accountable -- to the citizens of our nation. If we forget that, we have forgotten the lessons of democracy.

In many ways running for president has turned into a glorified reality show -- and it has to stop. For all our sakes.

I do believe in the simple but eloquent message of Mr. Lincoln. I’m not trying to fool anyone. Rather, I’m just searching for answers the same as you and understand that if your voice is not the integral part of my campaign, then I have failed.

Look, the simple truth that petrifies so many candidates is that we don’t have all the answers. Such a thing is impossible. I don’t pretend to have all the answers and if someone else says that he does, well, that’s reason enough not to vote for him in my book.

I simply can’t be all things to all people. No one can -- and no one but our Creator -- has all the answers.

You know that. You understand that. You, the voters, accept the fact that real human beings with real human frailties are running for president. You don’t expect us to be perfect.

But you do expect us to be honest, to be open, to admit and learn from our mistakes, to be beholden to no one, and to have only your best interests at heart.

You do understand that, but the “gotcha game” of partisan politics and life under the media microscope, makes most presidential campaigns overly cautious to a fault.

One mistake, one sentence taken out of context, one failed attempt at humor, one stumble, and the other side -- along with the insatiable 24 hour news cycle – makes you the fodder for the late night comedians, sees you being ripped apart on various blogs, starring on “YouTube” for the wrong reasons, and being forced to spend time and precious resources in the defense of something that should never have become an issue.

Obviously, the election of the next president will have an enormous impact on the future direction of our nation, and yet, we have allowed that process to be reduced, in many ways, to a running joke. To go for the cheapest of laughs, or score the cheapest of politic points, there are those in our country who will gladly sacrifice the serious for the inane – who will not hesitate to put their self interests before the national good. Even, as terrorism looms.

Sadly, while this has become the norm in the politics of today, it is a trend that is robbing the American people of the time, information, and security they desperately need to make a reasoned choice.

I deeply believe that the United States of America is the greatest nation on the face of the Earth. Period. I believe it is so because of her people. A people who, over the course of our storied history, have witnessed a revolution, the heartbreak of civil war, natural disasters, economic catastrophes, great personal loss, the ravages of world wars, and of late, have seen the very face of evil as terrorism has visited our shores.

Through all of this, the American ideal has not only endured, but grown stronger for the experience. It has done so because of the millions of our fellow citizens who have never forgotten that what makes our country great is not words, but faith. Faith in the abiding promise that is our republic. No matter their background, no matter their differences, their common bond has always been their steadfast belief in the goodness that is duty, honor, sacrifice, responsibility, country, family and God.

While some in our country would turn those sacred words into a punch line, I choose to believe that they are the pillars of our nation. Those honored tenets define the American spirit and certainly underscore the growing optimism I have for our very future.

In closing, I would stress that I am truly and deeply humbled to be part of this process and believe, more strongly than ever, that this election must be returned to the American people.

Thank you. God bless you and God bless the United States of America.”