Doug Giles
|
Posted: Mar 13, 2016 12:01 AM
Share   Tweet
The opinions expressed by columnists are their own and do not necessarily represent the views of Townhall.com. 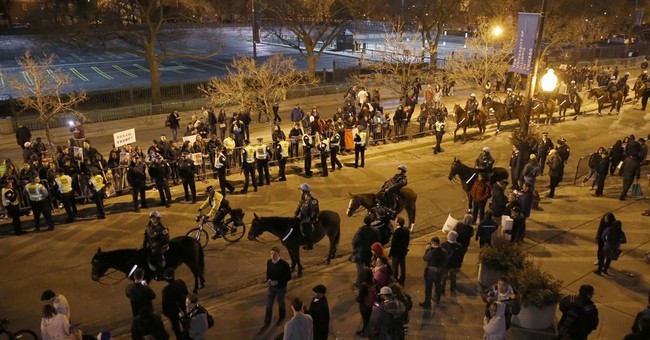 Yep, God help you if you don't parrot their opinions; and that is what last night's Nabob protest was all about, namely: an outspoken Trump, who has a massive following, has countered their ludicrous ideas and seeks to officially end their progressive wet dream; they feel

vulnerable, they hate it and thus he must be stifled.

As stated, if you differ from the Left then you must shut the heck up and not make public your deep disagreement with their weltanschauung. Especially, if you're an outspoken Republican calling foul to their woefully failed worldview.

Indeed, if you cough BS to their BS then you're in for some serious BS everywhere you go, especially if you go to mega “liberal” cities filled with left-of-center peeps with too much time on their hands.

Oh, by the way, those of you who lean politically to the right please remember this: if they can shut down The Donald's free speech in Chicago, then they'll eventually (it might take a couple of years) be coming for your free speech in Anytown, USA; and you're naive to think otherwise.

The message from Chicago last night was clear: No one ... and I mean no one else ... can offend – except a Leftist. Get it? Got it? Good.

What I found interesting in last pm's initial coverage of the protest was how it was being pitched to we the sheeple as just a group of students ... some concerned Democrats ... and some disgruntled Republicans ... who somehow got cobbled together in a spontaneous protest against the demonic Donald Trump, The Most Malevolent Man Of All Mankind.

That riot had all the spontaneity of a Bob Dole bowel movement. That crap was definitely planned. It was more organized than Jerry Seinfeld's closet. A myopic cyclops could see that. Cheetos are more organic than that rent-a-mob.  Okay, I'll stop.

Now why, pray tell, would the “reporter” downplay how organized and non-spontaneous this rabble was? Hmmm.

In all fairness, the “reporter” could've meant “spontaneous” and loosey-goosey in the sense that Hillary did when she described the Benghazi massacre.

As more info came pouring in, even Satan began to admit that the “news reporter” was dead wrong and it was very, very,organized.

So, who made up this “peaceful” soiree in Chi-town?

Well, you inquiring mind, it was folks like MoveOn.org, La Raza, #BlackLivesMatter, #Occupy rejects and Bernie backers, liberally mixed with far-left Anarchists and a smattering of regular disgruntled Joe's who loathe not only Donald but all conservative thought which seeks to de-throne their hard won Leftist policies.

Finally, here's a warning for my #NeverTrump readers who're rejoicing over Friday night's melee which shutdown Donald in the Windy City: don't get too giddy.

Should Ted get the GOP ticket, these clowns are going to come for Cruz as well. Ted's just as repellent to them. Maybe even more so. Especially when they begin to realize the depth of the Cruz revolt against liberalism. And I believe even if Cruz dulls his sharp barbs against Hillary and plays nice like Mitt Romney did with Obama in 2012, I still predict there will be hell to pay. This mob will not leave quietly.

Hey, speaking of Mitt and his tamed Hello Kitty 2012 tactics … how'd that nicety-nice, toned down, strategy work out for conservatives?