It’s Time Christians Told Those Who Seek to Silence Them, ‘Yeah, Right’ 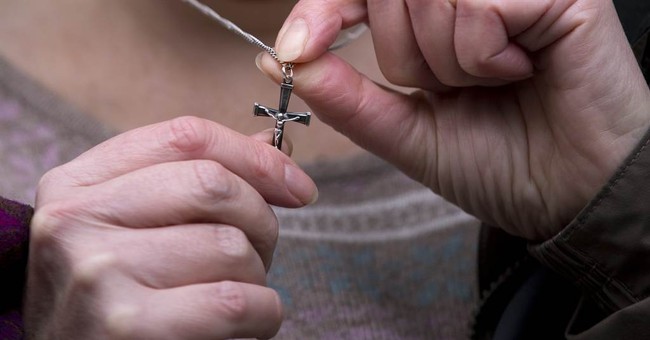 Two weeks ago a Sonoma State University student was ordered by one of the Seawolves’ lunatic supervisors to remove her cross necklace because some tender moron, who goes to that liberal madrasa, might get their panties in a wad.

Yep, the overseer thought the cross accoutrement was vulgar. This is the same school that, with their easily offended students, put on The Vagina Monologues last March 9th, 2013.

Before I get labeled some buckle-shoed, puritanical killjoy that wants to burn vagina puppets and have everyone watch TBN ad nauseam, let me be clear: I don’t give a crap what you do, just don’t ask me to pay for it or cheer you on. That said, I’m sick of the tolerant being intolerant of expressions of faith, whether it be in word or in jewelry. Why don’t you grow a little thicker skin, Miss Priss?

The secularists on the Left want Christians to hide their faith, to back down and essentially be ashamed of whom they believe in and what the word of God says.

The examples are ubiquitous. Whether it’s screaming “Verboten” at some chick’s cross necklace, or flippin’ out over our soldiers’ praying before they wolf down their MRE’s, or cheerleaders’ making positive banners with bible passages, or our legislators’ appealing to the Decalogue for policy, the thought police are in a full court press trying to get us to zip it when it comes to expressing our faith, all while they tout the most bizarre behaviors known to mankind.

Look, who knows if the intolerant tolerant will ever cease to be reflexively irate? One thing is for certain: whether or not they do or don’t, the Christian is commanded, at all times, to be bold with his beliefs in the midst of opposition.