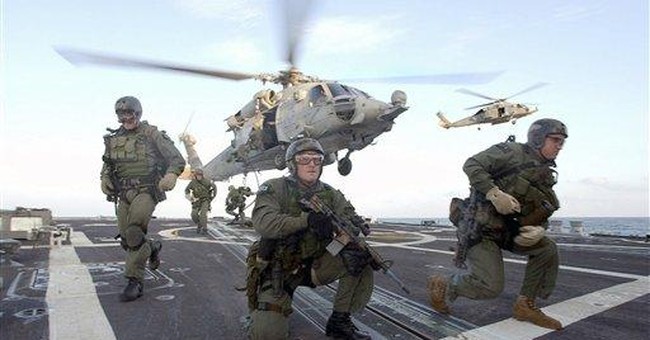 Act of Valor, which opened this weekend, features active (and anonymous) Navy SEALs in the re-creation of real events that showcase our crème de la crème rescuing our operatives and crushing our enemies in an OMG type of way.

I’ve got two words for the manner in which our boys were depicted in this flick … Sa-lute!

If I were a wannabe enemy of the U.S.A. (foreign or domestic) I’d be crapping my cargo pants (or tunic) after viewing Act of Valor—chiefly because our special forces are some bad mamajambas who have the tools and the tenacity to jack you up.

Yep, be afraid, villains, as our troops are effective ministers of God poised, ready and willing with stealth and style to inflict the wrath of God on those who do evil. I’m talkin’ Romans 13:1-5 style. Look it up if you don’t know what I’m talking about.

Another thing that I truly enjoyed about this film was the unambiguous patriotism of the soldiers and their families. Yep, no whining about their missions from their families or the SEALs who sacrificed their lives and limbs for God and country. It almost felt like I was in America again as I watched this movie. It was weird—but a good weird.

Even though it’s shocking to see our troops displayed in a magnificent manner within this Occuculture that loathes them, it was not a shocker to me; I have had the good fortune to spend time with many of our special ops and other soldiers in hunting camps from Alaska to Texas and have found them just as the movie displayed them: consummate class acts without a hint of the BS Hollyweird has smeared them with over the last decade.

I can’t say enough good things about this movie. In the theater in which my wife and I watched it we spotted several older gents and couples who sat in their seats and silently wept as the credits rolled. It was sacred.

I’m sure all the scabs and the venomous wood lice of the Left are going to crawl out from under the rocks where they dwell and bash this war pic, but that’s alright. Our SEALs and others have afforded you the right to be stupid and bray your insanity by keeping bad guys at bay, both at home and abroad, and thereby giving you the wherewithal to play your silly and ungrateful games against our fair land.

Lastly, parents, take your teenagers to see Act of Valor. Maybe, just maybe, some of the courage, patriotism and dignity depicted in this film will erase the film this crappy culture has slimed your kid with.

God bless America, our warriors who protect her, and those involved with this movie. Amen.