The New Jesus: Obama Be Thy Name 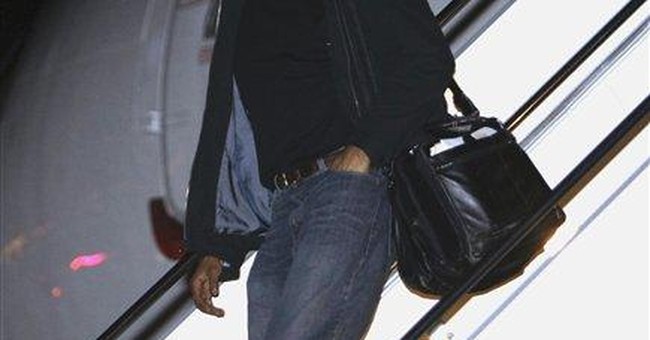 A buddy of mine in Texas sent a friend of his, an Obama backer, a devastating article written by Dr. Jack Wheeler in which he spotlights in 398 words the fact that Barack, in reality, is much different from the fabricated Jesus image the Dim-o-crats would have us worship.

Yes, in just a few keystrokes Wheeler deftly dismembered the notion spun by the scribes of Obama that he is the fresh breeze blowing in our land and reveals, instead, that Barack is a typical uberliberal slim shady politician who simply blows.

The thing that floored my Lone Star friend was that his “pal” told him to eff off and ended his “friendship” with him. My buddy ain’t sweating it, though . . . he’s a Texan. We did, however, have a snicker (if the rabid gay crowd doesn’t mind me using the word snicker) over the amazing Bible-like allegiance the Obama groupies sport—which is ironic seeing that most liberals are atheists or agnostics who pride themselves on being skeptics.

Hey, Obama crowd, chill out with the lock step, okay? Really . . . What kind of adult gets this excited over another human being? Call me jaded, but I look at my own wizards of political Oz with a jaundiced eye. I believe you’re setting yourself and your darling, untested candidate up—should he get into the Whitehouse—to thud on the ground like Geri Halliwell’s last CD did. For God’s sake, Obama-ites, God can barely live up to the hype you guys are giving the young Hussein. You’re tripping way too hard over the grossly inexperienced junior state senator spawned from the scheming netherworld of Chicago based politics.

Barack doesn’t represent hope or change, unless of course you’re an American-based euro-socialist or . . . or . . . an unborn child who’s queued up for an abortion. To the unborn baby, or fetus, as the hopemeister would call you, you’re about to change—but it isn’t for the best. But that doesn’t matter because Obama’s Jesus is cool with your eradication, you little pest. Next!

Yep, far from his managed messianic image as an oracle, in the real world he’s more like a Machiavelli wrapped in an enigma and covered in secret sauce.

Unfortunately, rationality has zero appeal for Obama oglers. To his followers, he’s Jesus (pronounced “Hey-Soos,” as Barack would have us say). His crowd has morphed into Miley Cyrus fans who will damn you to hell, plug their ears and overtalk you if you bring up the reality of Barack’s vapid, checkered political history and seedy associations.

I will give Barack this, though: He has performed an amazing miracle. Just as Jesus turned water into wine, Obama, Axelrod and the rest of their disciples have turned thinking people’s brains to mush.

Formerly rational swing voters everywhere: Before you soil your pants any further regarding Barack, the hope of America, just check out his formidable critics and what they have to say about BHO’s ascension, philosophy and politics. Give him at least the same scrutiny Linda McCartney’s vocal tracks came under on Paul’s Band on the Run LP. So for those who can still reason, here are some books you ought to take a gander at once you get sober:

- The Case Against Barack Obama: The Unlikely Rise and Unexamined Agenda of the Media's Favorite Candidate, by David Freddoso

- Fleeced: How Barack Obama, Media Mockery of Terrorist Threats, Liberals Who Want to Kill Talk Radio, the Do-Nothing Congress, Companies That Help Iran, and Washington Lobbyists for Foreign Governments Are Scamming Us...and What to Do About It, by Dick Morris