Would Christ Carry a Concealed Weapon? 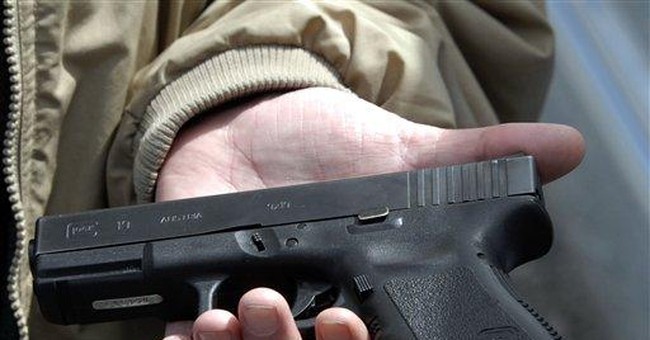 I was on a talk show the other day defending the Second Amendment and discussing with my host the stupid, unconstitutional and woefully inadequate D.C. gun ban. I made it clear that I am a Christian who is extremely cool (to the point of being giddy) with our right to keep and bear arms.

After we trounced the anti-gun lobby for their goofy, doe-eyed, John Lennon-like “Imagine” solutions to violent crime, we opened up the phone lines for folks to weigh in with their two cents. The first caller was a woman who asked if I thought Jesus would carry a weapon if He were here today, to which I quickly replied, yes, of course He would—especially if He lived in Miami and was driving down I-95 at four o’clock in the morning.

The female caller, being far more spiritual than I am, didn’t think it was funny and went on to make it personal by asking if someone were attacking one of my daughters and I had a gun if I thought Christ would be cool with me killing the felonious freak. I told her that I sure hoped He would because otherwise He’d be terribly disappointed in me and would just have to forgive me. Common sense and primal instinct tell me that the bad guy should die and the good girl should live. Call me carnal.

Of course the holier-than-me caller was aghast that as a Christian I would have no problem whatsoever defending my friends, family, person and possessions with deadly force. Her reason being was that she couldn’t picture Jesus doing it and concluded that because she couldn’t wrap her mind around Him green-lighting the destruction of a demented perp that He certainly wouldn’t and thus I shouldn’t.

When discussing what Christ would do in a given situation, it’s usually good to actually go to the gospels, read them and then draw conclusions. Here’s what I’ve gotten after scouring Scripture a few times:

1. Jesus in His earthly ministry didn’t carry a weapon except the time when He took a whip (a whip! You gotta love it!) and Billy Jack’ed the televangelists out of the temple. He didn’t chide them or write them a strong but tasteful e-mail asking them to please not do that kind of stuff in church.

What did the meek and mild Messiah do? He whipped them. God, I hope you got that on DVD for me to watch when I get to heaven. I wonder if the Christ-is-a-pacifist-wuss-lady can picture sweet Jesus laying the leather to the backs of the marketers who were making His father’s house a place of merchandise.

If Christ were to do that today He’d be thrown in prison, and 99.9% of churches in the USA wouldn’t have Him speak at their annual Hallelujah Aren’t We Fabulous conference because Jesus wouldn’t be behaving very Christ-like.

2. It’s clear from Scripture that Jesus didn’t need weapons because He had at his disposal an angelic host that could flatten armies. I unfortunately don’t have that capability. Nor can I walk through walls or split oceans. Christ had supernatural protection, and His disciples carried swords. I, too, believe that God supernaturally protects me, to some degree, because I should have been dead a long time ago. However, should my guardian angel be napping or busy doing something else other than trying to keep up with me, I’ll be okay, because Smith & Wesson art with me as well.

3. Lastly, in Luke 22:36-38 Christ told his disciples, even though He personally did not pack a weapon, that they, in light of His departure, should get a deadly weapon—namely a sword. Check it out . . .

“And he [Jesus] said to them [His disciples], ‘But now, whoever has a money belt is to take it along, likewise also a bag, and whoever has no sword is to sell his coat and buy one. For I tell you that this which is written must be fulfilled in Me, ‘And he was numbered with transgressors’; for that which refers to Me has its fulfillment.’ They said, ‘Lord, look, here are two swords.’ And He said to them, ‘It is enough.’”

Jesus told them—didn’t ask or mildly suggest—but told His buddies to sell their leather jacket if need be and buy a sword. The sword which Christ told his compadres to purchase was not a QVC decorative Claymore to hang on their walls to commemorate the good times they had when Christ was around. The original word used for sword in this text was a large knife used for killing animals and cutting flesh. It was particularly fashioned for short, deadly thrusts in hand-to-hand combat.

Jesus didn’t tell them to carry a whistle, a shofar horn, or a bag of sand to blow in bad guys’ eyes, but a dagger-like sword. A vicious, nasty and deadly weapon not used for cutting vegetables, spreading butter or splitting a bagel but for violently tapping a lung or heart in case of an attack. Now, in a 21st century WWJD context, even though He didn’t personally carry a weapon, what do you think He thinks about His followers defending themselves with deadly force, huh, pacifists?