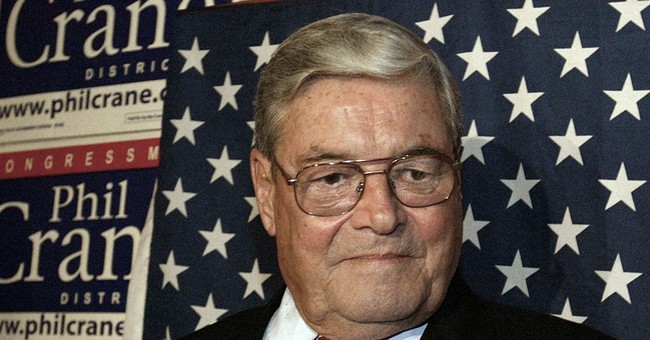 Phil Crane, a pillar of conservatism before I was politically active, died over the weekend. I didn’t know him as a politician, although my Reagan-era boyfriend and this University of Vienna (Austria) graduate were drinking buddies in and around DC.

I knew Phil later as a friend, card player and traveling companion. I would go on a mad cleaning jag and Phil and Arlene would come for dinner, talk and cards. Phil kept score and drew a sun-like figure before the loser’s name. It wasn’t a sun, but an assxxxx, which he found truly funny.

When Phil was still in Congress, he chaired the Trade Subcommittee of the Ways and Means Committee, so my husband asked him to visit the main Hundai plant in Korea. David represented Hundai and was delighted when Phil agreed, but as the date approached, Phil and his staff didn’t return calls.

Finally, Arlene called me to say that she wasn’t letting Phil go to Korea unless they went to Taiwan; Phil had promised her he'd take her someplace she wanted to go. Phil had permission to make the trip if we added Taiwan and if I came along. David laughed when I told him, but that is exactly what happened.

I didn’t get to Korea but met the crew with Ambassador Jerry Carmen in Taipei. Hundai had given Keene and Crane lifelike 3-foot model tanks with moving and working parts, a child’s dream toy. Arlene tried to abscond with both, outlining the ages of the boy grandchildren. I resisted and for the first time in my newly married life, I won one for my step-grandchildren.

Eventually the tour guide gave up on some of our schedule and realized Arlen and I were not shoppers, but loved Asian food. We ate our way through Taiwan.

Harvard educated and ambitious, we correctly pegged the mayor of Taipei as a future country leader; today Ma Ying-jeou is Taiwan's President. Arlene was one of the most insightful people readers I have ever met; she could see right through to the goodness or weak spots, a quality that got her into mounds of trouble over the years. Phil was no pushover and reined her in with most people, but not us.

Not shopping hid Arlene’s inability to walk well -- the last time we played cards Arlene kept forgetting the cards, perhaps a sign of the stroke that was to come. Soon after Phil lost his Congressional seat, Arlene’s health kept him occupied and to their credit, their five children seemingly evenly divided the care she needed.

I drove Arlene and later Phil downtown for parties, usually because Arlene had juicy gossip and wanted to share it, or to visit a favorite restaurant where the owner closed then served an amazing meal with no menus. She loved to remind David that she has been a private investigator, and that she has worked on the divorce and custody battles for his ex-wife’s first divorce.

When Phil left Congress, I made sure he got to his friend Congressman Jennifer Dunn’s funeral, where the committee staffers immediately scooped him into a back room without me, sending me in a panic for my charge. Dropping him off at a Reagan Alumni Event table to sit while I got food for us, I heard a nearby appointee say “Phil Crane is here, I want to meet him.” By the time I returned she had summarily kicked the stately but old man next at “her” table. Phil heard her, he just didn’t want the fight or to meet her by then.

Phil complained that the old boiler had to sit in their house because the basement was so full they could not get it out. One day the telephone number didn’t work. We had been house shopping and Phil said they had just sold the old house fully furnished for about what we had just paid. “I loved that house, why didn’t you call us Phil?”

Their Landsdowne, Virginia, apartment it was farther from us and closer to his children. A nurse came during the day; the kids took over nights and weekends. Phil was proud of his view of a golf course and played as often and as long as he could. Arlene remained in her hospital bed in the living room with the television going, all her energy and brains intact but her body uncooperative in a hive of activity. Always loving, Phil was a rock.

I made a few calls to get them visitors, these historical conservative figures who had worked tirelessly to recruit conservatives even as Ronald Reagan was still a union leader and General Electric spokesperson. Lobbyist Mark Neuman brought turkey about this time of the year and celebrated Thanksgiving Keenes, Cranes and lots of photos.

When former Chairman of the Republican Party Lee Atwater keeled over at the podium from a brain tumor, he called pals in his extensive rolodex to say he was ok, but many of us knew it was goodbye. To my friend Kathy Wilson of the National Women’s Political Caucus he expressed his regret that he never spent enough time with his father.

Phil, you were my Washington Dad. I never saw enough of you; you never turned me down when I needed you. Rest in Peace, I know you missed Arlene and are together again.