Is Hillary Going Down In Flames and Bernie Sanders the Next Democrat Nominee?

Donald Lambro
|
Posted: Jan 27, 2016 12:01 AM
Share   Tweet
The opinions expressed by columnists are their own and do not necessarily represent the views of Townhall.com. 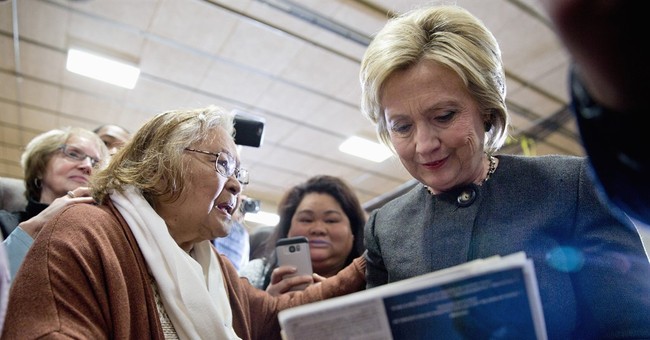 It looks like Hillary Clinton will lose to Sen. Bernie Sanders in New Hampshire and Iowa for a lot of reasons.

Many voters do not trust her and think she would be a terrible president, according to the latest polls. Obviously her credentials as a former U.S. senator, without any real achievements to speak of, or her four years as secretary of State flying around the world giving speeches, with little to show for it, haven't impressed the voters.

According to the latest CNN/WMUR poll, 44 percent of the voters say she'd be either a poor or bad president, with 28 percent saying she'd be awful.

That poll shows the far-left Vermont lawmaker, who calls himself a "democratic socialist," leading Clinton by 60% to 33%. An earlier Boston Herald survey in the Granite State showed him running well ahead of her in the first-in-the- nation Democratic nominating primary by 55% to 39%.

The CNN survey also shows Sanders leading Clinton in Iowa 51 percent to 43 percent among likely Democratic caucus voters who will cast their votes next week.

Two clear back-to-back victories in the first contests for the Democratic presidential nomination would give Bernie Sanders a huge shot of momentum heading into the long, marathon race to come.

Without any doubt, Clinton has the sharpest strategist in the country advising her every step of the way, former president Bill Clinton. But she also faces a multitude of scandals that have raised serious questions about her honesty, competence and judgement.

Speaking at a CNN-sponsored town hall event Monday night at Drake University in Des Moines, Iowa, a young Sanders supporter confronted her with these issues.

"I've heard from quite a few people my age say you're dishonest," he said, suggesting that this was why so many young people were supporting Sanders' campaign and packing his rallies across the country.

Clinton responded by saying that "people have thrown all kinds of things at me. I can't keep up with it," she said.

"They come up with these outlandish things, they make these charges, I just keep going forward because there's nothing to it, they throw all this stuff at me and I am still standing."

Our late ambassador in Benghazi repeatedly pleads for increased security to protect our outpost in Libya, which never comes, and he and three other Americans are killed, triggering a multitude of government investigations. And she says "there's nothing to it"? It's just "stuff"?

And what about, by her own admission, the "mistake" she made by conducting her top secret State Department business on an unsecured, private computer? She simply dismisses that one as "these outlandish things."

The State Department's Office of Inspector General, who has been -- and still is -- investigating this breach of national security, thinks there's something more going on here. The FBI's investigators, who've been able to retrieve what she erased from her computer's hard drive as merely "personal" -- think so, too.

As print-outs of her e-mails continue to undergo further examination, why are so many of them heavily redacted?

And Hillary says "there's nothing to it"?

But she faces another problem that's even deeper than this and that she can't run away from.

Real Clear Politics, which keeps tabs on all of the polls, tells us that 63.6 percent of Americans surveyed believe that our country has been headed "in the wrong direction", and only 28.4 percent say "right direction."

She was the third highest ranking official in the first four years of Barack Obama's administration, overseeing our country's foreign and national security policies -- a critical period when the terrorist threat grew far more lethal and is now targeting our country.

She not only continues to fully support Obama's failed economic policies, but has made his unfulfilled spending and tax hikes part and parcel of her campaign agenda.

In Iowa, she told the young man that she is "fighting to give kids and women and people who have been left out and left behind" the chance to get ahead.

If that's true, why didn't we hear any complaint from her over the course of Obama's failed record: higher poverty rates, the decline in economic growth that's now running at 1 percent or less, according top economic forecasters, and a labor force that is shrinking, not growing.

Why didn't we hear criticism from Democrats on Capitol Hill over Obama's long, slow, sluggish recovery these past seven years?

And why is the Fed raising interest rates at a time when economic forecasters say the Obama economy is still too fragile. Businesses are laying off workers, while Walmart and other major businesses are closing their stores?

The major political story of 2016 is that Clinton is on the verge of going down in flames and the signs are popping up everywhere in the New Hampshire polls, the state that threw her husband a political life preserver in 1992 when it looked like his bid for the presidency had ended.

The Democratic Party is teetering on the edge of a cliff in this election year that could put them into the political wilderness for years to come.

Hillary comes packaged in scandals that aren't going away, with several, very possibly damaging investigative reports due to come out soon.

And that comes with the increasing possibility that their nominee will be the fiery socialist Bernie Sanders, whose big government, craddle-to-grave welfare spending plans, fueled by more than $1 trillion in higher taxes, that would reach down into the middle class.

That would put Donald Trump into the White House and a whole new ball game for the Republicans.