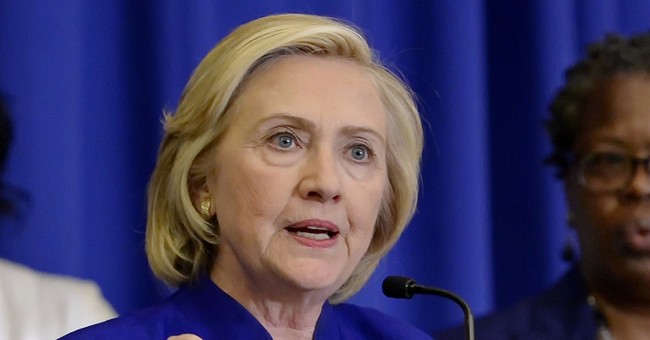 WASHINGTON - The only thing more fun to watch than Hillary Clinton's falling polls is to see her fans in the news media turning against her as 2015-16 election cycle gets underway.

In a blistering column this week, titled "Hillary Clinton's guilt by association," she was battered black and blue for the shady financial scams in her family's multi-billion dollar Clinton Foundation that have made them very rich indeed.

The sprawling Clinton Global Initiative "has sucked in so much cash from so many sources that, with some creativity, it can be tied to virtually any skullduggery," writes the Washington Post's political pugilist Dana Milbank.

Milbank isn't someone who has made a habit of beating up the Clintons. In fact, he has come to their defense over the years. But even for this dyed-in-the-wool liberal pundit, this one is beyond the pale. This one breaks the rules.

The New York Times and the Post have dug deeply into the tawdry details revealed in the bestseller "Clinton Cash: The Untold Story of How and Why Foreign Governments and Businesses Helped Make Bill and Hillary Rich," by Peter Schweizer.

His book, and followup reporting by both newspapers, blows the lid off on how the charitable foundation raked in billions of dollars that has helped Bill and Hillary build a huge fortune for themselves. The former president alone pulled in a stunning $26 million in big speaking fees, much of it from those who contributed generously to the family's foundation.

"The vast array of contributors to the foundation (and those who paid the Clintons to give speeches) gives endless material to critics," Milbank says.

Indeed, there is one troubling scam after another built into this business. The purchase of a U.S. uranium mining firm that sought approval for the deal from Hillary Clinton's State Department; and an arms-sale approval (also from the State Department) sought by foundation contributors.

Milbank lists many more in his column on the Clintons' financial dealings, including donors who sought the State Department's clearance for their money-making projects. Like the Keystone XL pipeline bankers who paid both of them to give speeches.

"The Clintons' defenders will say none of this is illegal, and that may be so. The problem is appearance," Milbank writes.

But there is more at stake here than just how this looks on the surface. There is also Hillary's hypocrisy about her agenda and how she's taken advantage of how one-hand-washes-the-other has made her a lot of money.

"Clinton can talk all she wants about income inequality and reducing the influence of money in politics, but her recent experience make her seem insincere," Millbank says. To put it mildly.

The latest revelations about how the Clintons' parlayed their fortune on the back of a charitable foundation aren't going away. And they're hurting Hillary's reputation where it hurts most -- in her political polls.

Two new voter surveys last week showed her favorability polls sinking to around 45 percent. The chief reason: half of the respondents don't trust her.

And it's not just the Clintons' foundation revelations, it's her use, and misuse, of a secret e-mail server to conduct both her personal and official business over the four years she was President Obama's secretary of State.

Especially when Mrs. Clinton revealed that she and her attorneys combed though those e-mails, deleted ones that she said were not official business, then turned over all the rest to State Department officials.

What was deleted? E-mails where she wrote about how to handle the response to the terrorist attacks on our U.S. consulate in Benghazi, Libya, where of our ambassador and three other Americans were murdered?

Congress is investigating all of this, demanding to see all of her once-secret e-mails, including the ones that were scrubbed, if they're retrievable. There will be hearings and Hillary, among others in the State Department, will have to testify under oath.

This scandal isn't going away. There will likely be new revelations to come as the investigation widens, and it is going to play out, one way or another, over the course of the presidential campaign.

Including the Democratic presidential primary where former Maryland governor Martin O'Malley, a tax-happy, ultra-liberal, is a darkhorse candidate right now. But one whose campaign is getting a lot of attention from the news media.

He is joined by Vermont Sen. Bernie Sanders, a self-described socialist. Both want to push the party further to the left, if that's possible, and are looking for any chance they have of bringing Hillary down.

The pro-Hillary Washington Post recently declared that "a once sleepy Democratic primary has come alive."

Their chance may come when Mrs. Clinton explains her economic agenda at a big campaign rally in New York at the end of this week.

She has already suggested the Obama economy isn't working for middle class Americans, but hasn't said what she would do to strengthen it to boost incomes that have remained largely flat.

And she has been taken to task by political analysts for her reluctance to address the issue that voters say is their chief concern -- beyond raising the minimum wage that the nonpartisan Congressional Budget Office says would kill between 500,000 and one million jobs.

But whatever Clinton proposes, the fact remains that her party has presided over the last six and a half years of a sluggish economy that the government says shrank in the first quarter. And she has had nothing substantive to say about any of this.

It would be patently ridiculous to say that we now need to give any Democrat, including Hillary, another chance to get it right.