The Lethal Reasons Behind Netanyahu's Distrust 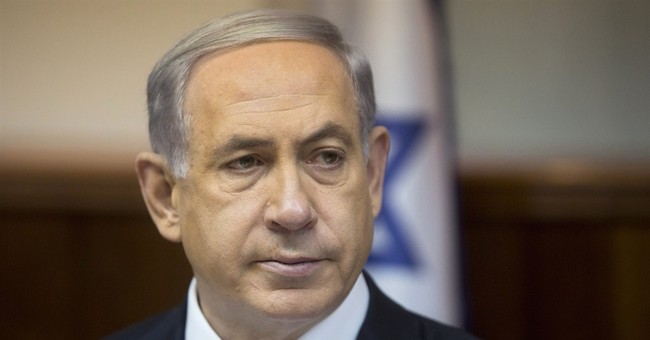 WASHINGTON - There are lethal reasons why Israeli Prime Minister Benjamin Netanyahu distrusts the two men seeking to forge a nuclear deal with Iran that threatens his country's future survival.

President Obama and Secretary of State John Kerry have a bad habit of caving into the demands of radical regimes, believing they can trust them to keep their word, despite all the evidence to the contrary. Driving a hard, iron clad, bullet-proof bargain is not their forte.

Start with Obama's naive plans to "reset" relations with former KGB agent Vladimir Putin. See where that's gotten us. And they never learn their lesson.

When Syrian despot Bashar al-Assad used poison gas on his people, Obama and Kerry embraced a devious plan set forth by Putin, one of Assad's co-conspirators, to negotiate a deal that would supposedly destroy Syria's chemical weapons stockpile.

In the end, that took the pressure off Assad, though it's still not known if all of the chemicals were eliminated. But then he resumed a deadly campaign of barrel-bombing his people, killing thousands of them, while Obama and Kerry looked the other way.

Putin saw Obama as a light weight whom he could push around and that's what he did in the Ukraine -- seizing the Crimean Peninsula without so much as a scratch on him. Then he sent Russian forces deep into Eastern Ukraine, dismissing Obama's mild economic sanctions as mere distractions.

Last month, Western European leaders, with Obama's and Kerry's blessings, worked out a flimsy cease fire deal in an effort to stop Putin's drive toward Kiev. But of course he ignored the cease fire deadline until his soldiers took control of critical new territory -- from which to launch their next offensive.

For the moment, there's an uneasy lull in the battle but the deal that was hammered out wasn't worth the paper it was printed on. And Obama continues to ignore the dire pleas from Kiev for weapons to defend their country from Russian aggression.

Kerry met with Iranian Foreign Minister Mohammad Javad Zarif in Geneva Monday for two and a half days of talks to work out a framework for a nuclear agreement to prevent them from building nuclear weapons for at least 10 years.

While back in Washington, Netanyahu was addressing the Republican run Congress, telling lawmakers "This is a bad deal -- a very bad deal. We're better off without it."

Netanyahu's been lobbying against any deal because it has all the earmarks of selling out Israel's security over the long term. The administration's plan calls for Iran to freeze its nuclear program for a decade.

Israel, which closely follows the number of centrifuges Iran is producing as well as its uranium enrichment, wants the entire program dismantled because it's clear that they cannot be trusted.

This is a very radical regime that's governed by Muslim clerics who say the Holocaust is fiction. They're financing terrorism throughout the Middle East and remain one of Syria's chief allies bin mayhem. They have repeatedly said that they intend to wipe Israel from the face of the earth.

Any deal that gives Iran another decade to produce more centrifuges and enlarge its uranium stockpile could give them the materials to build a nuclear bomb in months, not years.

Netanyahu certainly doesn't have any confidence in either Obama and Kerry, or the other countries involved in the talks that include France, Germany and Russia.

Europe didn't lift a finger to help Ukraine which now lies helpless before Russia's warmaking machine. And now they seem ready to throw Israel under the bus, too.

But with the world's major powers dangerously pushing for a deal that would allow Iran to keep its nuclear program intact, Netanyahu sought to sound the alarm on the largest stage he could find.

House Speaker John Boehner offered him the podium in the House of Representatives Tuesday to speak to a nationally televised audience and Netanyahu seized it.

The White House condemned the move, and national security adviser Susan Rice said it would be "destructive" to U.S.-Israeli relations. But in fact relations between the two nations were already in shreds.

One high ranking Israeli diplomat said that if Netanyahu wins a third term in office, he has in fact effectively "written off" relations with the president for the rest of his term.

The day before his address to Congress, Netanyahu delivered a fiery explanation of the dangers Israel faces from Iran at the annual policy conference of the American Israel Public Affairs Committee (AIPAC).

"America is the strongest power in the world," he said. "Israel is strong, but it's much more vulnerable."

The goal of the negotiations, he said, was to make sure "there's at least a year between us seeing them try to get a nuclear weapon and... actually being able to obtain one."

It isn't hard to see why Israel would fear that this narrow timeline was cutting their margin of security a bit too close for comfort.

And besides, what system of verification would Israel enough time to act in defense of their homeland? Certainly not one devised and approved by Iran's radical leaders.

The 10 year deal the administration is putting on the table "is a bad deal" and we're better off without it," Netanyahu told Congress

"Ten years? That's why it is so bad, he said, because "it paves Iran's path to a bomb." It allows Iran to keep its nuclear infrastructure. Not one facility will be dismantled.

Trust Iran? Not when its Supreme Muslim leader sends out a tweet that Israel must be destroyed.