On Every Big Issue, Obama's Presidency is Found Wanting 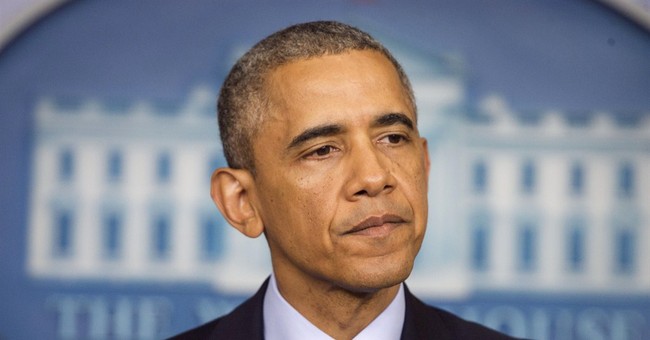 WASHINGTON - Republicans have a wealth of political issues that will dominate the 2014 midterm election races and determine their outcome.
The national news media has done its best to try to bury these issues, play them down or sugar coat them, but the American people know better. They have persistently put these issues at or near the top of every voter poll in the last six years of Barack Obama's scandal-ridden, trouble-plagued administration.
It's hard to break through and overcome the power of the Washington news media that has worked hard to cover up the Obama White House's blunders. But this will be the GOP's chief challenge in the next four months as we race toward the fall elections.
Here are the issues Republicans must pound between now and then, and where they stand today.
1. The Obama economy: No other issue is more critical in the minds of the voters as they have watched the once mighty U.S. economy grow weaker, repeatedly turning in one mediocre, lackluster performance after another.
Six years into the so-called recovery, economic growth wasn't just weak. It was actually shrinking in the first three months of this year by a shocking 2.9 percent. Our exports were anemic, and business inventories were down. It was the worst quarter for economic growth since the middle of 2009.
Obama's been running around the country telling us that manufacturing is exploding. In fact, orders to U.S. factories fell in May by 0.5 percent.
It's not going to get much better. The Federal Reserve forecasts that growth will stumble along at little more than 2 percent this year, held back by Obama's anti-business, anti-growth policies.
2. That leads to the second most important issue: jobs.
The average unemployment rate has fallen to 6.1 percent. But that's largely due to millions of discouraged, long term jobless workers who have stopped looking for work and thus are no longer counted among the unemployed.
If the same percentage of these adult workers who've dropped out of the labor force were looking for work again, as when President Obama took office, the real jobless rate would be 10.2 percent, says economist Peter Morici at the University of Maryland's Smith School of Business.
Fed Chairman Janet Yellen says this is one of the most serious problems confronting the economy and the labor force participation rate is not going away soon. Our once muscular workforce is shrinking, a disturbing sign of an economy and a nation in decline.
Hidden or downplayed in the June jobs numbers is the harsh reality that many of them are low paying temp jobs. Nearly 80,000 of them were added to the labor force last month, according to the ADP payroll processor's latest survey.
3. Persistently sky high, $600 billion budget deficits and a growing, $17 trillion debt threaten our economic security as never before.
Americans are justifiably worried about our debts and want the government to abandon its spendthrift ways. The GOP House has passed one budget after another to do that, only to see the Senate refuse to negotiate common sense ideas to slow down the rate of spending.
Hundreds of needless programs need to be shut down, like the Export-Import Bank that dishes out tens of billions in corporate welfare. Departments need to be consolidated and reduced in size. Entitlements need reforming to return them to fiscal health for the next generation.
4. Obamacare: There's a huge scandal brewing in the president's 2010 Affordable Care Act that was revealed in two reports this week by the Inspector General's Office in the Department of Health and Human Services.
They reported serious inadequacies and shortcomings in the system's "internal controls" that may have allowed millions of people to sign up for cut-rate health insurance benefits who were ineligible for the subsidies, tax credits and other financial help under the law.
Of the 2.9 million "inconsistencies" found in the records of the new state-run health insurance marketplaces, two of the most common dealt with the applicants' income and their citizenship which were not verified.
"This report tells us that the administration was more concerned with appearances than getting anything in Obamacare done right," said Sen. Lamar Alexander of Tennessee, the ranking Republican on the Health, Education, Labor and Pensions Committee.
Obamacare and its impact on small businesses, the economy and ordinary working Americans who are finding it harder to afford steadily rising premiums, will be a big issues this year. And this week's investigative reports will only add more political fuel to the fire.
5. Incomes and rising poverty: Obama and his party consider themselves the champions of the poor and the middle class. But the harsh and painful reality of their anti-wealth creation, anti-business policies is growing poverty and, for many Americans, a struggling middle class.
According to a recent U.S. Census Bureau report, one in five neighborhoods have incomes that are below the poverty income level.
But the report's most explosive finding is that poverty has worsened under the Obama administration.
By 2010, the share of people living in these rapidly expanding poverty areas had grown to 25.7 percent, up from 18.1 percent in 2000. In 1990, it was 20 percent.
No doubt Republicans will be pounding other issues -- including inflation, higher taxes, rising gas prices, and the veterans scandal that has turned many independents and some Democrats against Obama and his party.
But the top five issues listed above are the major ones that will drive the GOP's political offensive to win back the Senate in the next four months.
Obama and his party will fight back with the usual class warfare tactics. They'll try to frighten voters into believing the GOP will take away their Social Security. It will be the same old demagoguery that worked for the president in 2012.

It's not going to work this time. Voters across the board have lost confidence in his promises, his presidency and his party. On Nov. 4, it's going to be a blood bath.