Is It High Time For a Change? 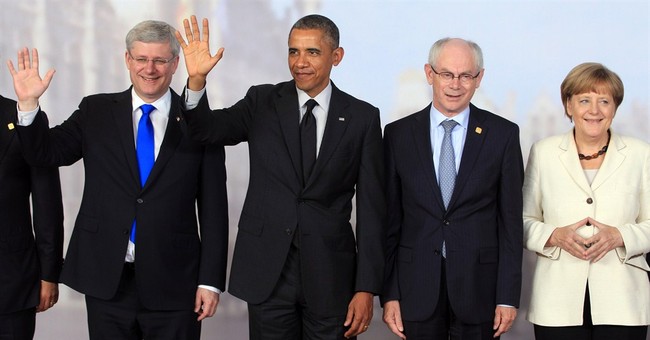 WASHINGTON - You would think the Democrats were riding high in the political polls, with all of the worshipful media attention being given to Hillary Clinton lately.

Hardly a week goes by that the media establishment isn't gushing over her likely presidential bid to succeed President Obama in the White House. The networks have been shamelessly promoting her, with nary a hint of any criticism. She's on the covers of major magazines. And next week she begins what may be the biggest national book tour in publishing history.

But Clinton has a lot of baggage in her past, and more than a few political obstacles to overcome before she has any hope of moving back into 1600 Pennsylvania Avenue.

Clinton, Obama and the Democrats can hardly point to a record of major accomplishment over the past six years, and the next two years don't look very promising, either.

For starters, Clinton won't be able to campaign on an agenda that tells voters, "If you liked the past eight years of Barack Obama's presidency, you're going to love the next eight years of a Clinton administration.
Polls show that Americans are pretty sour on the last, nearly half dozen years under Obama and the Democrats on a wide range of issues. And they are especially critical of one of Clinton's major failures as secretary of State: the Benghazi coverup.

This week's Washington Post-ABC News poll, among other surveys, gives Obama failing grades on just about all of the major issues that voters say are among their biggest concerns.

Only 43 percent of Americans approve of the Obama administration's handling of the economy, with more than 50 percent saying they disapprove of the job he's doing on an issue that tops the list of public concerns that affect most Americans.

It gets worse. Just 41 percent approve of his handling of foreign policy issues; 38 percent on immigration reform; 39 percent on Obamacare.

Other worries include a dysfunctional government, the federal budget deficit and debt, and the deeply unpopular health care law.

Despite dozens of speeches Hillary has given since she left her post at the State Department, it is hard to recall her saying anything substantive about these issues, at least in public.

What are her views about an underperforming economy that shrank by 1 percent in the first three months of 2014? What would she do to turn around an economy that's been "in recovery" for the last five and a half years, and whose labor force has been shrinking since Obama took office?

She doesn't say, because she fears any criticism of the Obama economy would anger Democrats and bring down her approval polls. And probably because she does not have any idea how to get the economy up and running again.

Americans are an impatient people who have a habit of turning to the party out of power when they don't like the job the present administration is doing. Obama's approval polls have been in the low 40s since last year (43 percent in the Gallup Poll's latest three-day rolling average), with 52 percent disapproving of his trouble-plagued presidency.

Can Clinton convince enough voters that they will be a lot better off with the same dysfunctional party running the government, with the same, failed liberal ideas? That's a stretch, to say the least.

And what about the considerable baggage in her career as the highest ranking Cabinet official on Obama's team who presided over the Benghazi massacre where our U.S. ambassador was killed along with three other Americans?

Questions about how she responded to that attack by Libyan terrorists, and why her State Department rejected the ambassador's escalating pleas for increased security, aren't going away anytime soon.
At a Senate Foreign Relations Committee hearing on what led up to the attack, Clinton famously uttered the question, "What difference does it make" now, suggesting that it was more important to see that it doesn't happen again.

But polls shows that many Americans still think events in Benghazi, and her still-unexplained handling of them, deserve further investigation.

And when reminded that Clinton was in charge when our consulate officials were murdered, and that her staff was blaming it all on a protest to an anti-Muslim video on the internet, 50 percent of Americans "disapprove of the way she handled this incident."

Last month, Democratic leaders, at first, opposed a GOP proposal to conduct a broader congressional investigation, as did administration officials. But 51 percent of Americans said they supported a much fuller examination of how the administration handled the Benghazi crisis, according to this week's polls.
You can bet that Hillary Clinton's role in this scandal will be at the center of the Republicans' lengthy investigation.

The two year run up to the 2015-16 presidential election cycle begins in just five months when the November mid-term elections are over. But it would be a mistake to think that, with Clinton leading her party's ticket, the voters will want to continue keeping the Democrats in charge of the "mess in Washington."

Americans are rightly angry about their scandal-ridden government and, especially, with the Democrats who are in charge of running it.

The IRS scandal that targeted conservative groups. The Benghazi cover-up. Trillions of dollars in deficits and debt. A moribund economy where good, full time jobs are harder to find. Untold numbers of ill veterans who die waiting for medical care at VA hospitals.

No wonder polls show that three-quarters of registered voters say they will vote in November, up from 68 percent in April, as Democrats worry about lower turnout.

The main event comes two years later when the voters must decide whether they want four more years of divided government, or a return to prosperity and full employment.