Obama: "A Trillion Here, a Trillion There, and it is Still Not Nearly Enough Money" 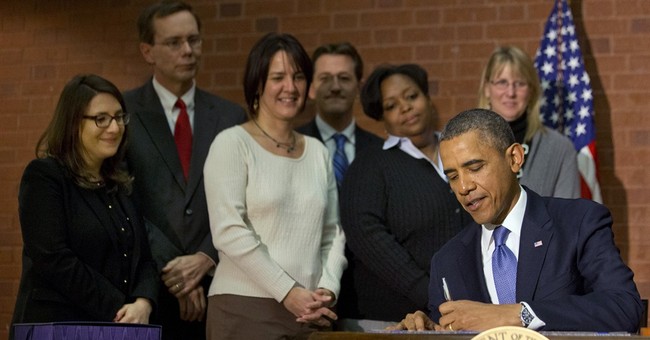 WASHINGTON - The federal government has grown obscenely fat over the years, and under President Obama it's gotten much fatter, eating into our economy and the very foundations that made America great.

It has outgrown our incomes and now threatens us with suffocating debt, costly regulations, punishing mandates, and a punitive tax code that's invaded every nook and cranny of our society and our daily lives.

You don't hear much about this growing crisis, certainly not in the national news media which never saw a federal domestic program it didn't like. Even a lot less in Congress which enacts our laws, writes our taxes and passes every budget.

And certainly not a breath of complaint from Obama who rose to power on a lengthy list of big spending plans. Have you ever read a quote from the president complaining that government has grown too big, too costly and too wasteful and must be cut down to a more affordable size?

Obama worships at the altar of big government, except he thinks it should be a great deal larger and spend a lot more than it's spending now. No matter how much more debt it imposes on future generations, or how much of our financial life blood it drains from a persistently weak and dangerously undernourished economy.

Exhibit A in this indictment is the nearly $4 trillion budget plan that Obama sent to Congress last week for fiscal year 2015. You don't recall hearing much about it? I'm not at all surprised.

Much if not most of the national news media seemed to greet his unprecedented budget wish list with a long yawn. It wasn't the lead story in the Washington Post where such stories are usually played. The network news dismissively shoved the story deep into their broadcasts and devoted little time to it.

The budget came and went, without any deep analysis of the growing size of government, its immense cost to all Americans and businesses, and the mountain of additional money Obama wants to spend on a lengthening list of new domestic programs.

He calls for $76 billion more to launch a new nationwide program for early childhood education. He asks for $70 billion more for highway construction. He wants to expand the earned-income tax credit for the poor by $60 billion.

That's just for starters. He wants to spend $56 billion next year alone for what he calls the "Opportunity, Growth and Security Initiative." The Post says this is "essentially a grab bag of fresh cash for agencies affected by sharp spending known as the sequester."

This new spending would also be spread around to pre-school programs, more job-training agencies and a new parental leave benefits program -- among other spending, apparently aimed at the middle-class.

All of this plus other spending in Obama's budget would allegedly be paid for from a long list of additional taxes on businesses, investors and wealthier taxpayers -- taxes that he's proposed many times before but have absolutely zero chance of enactment.

All of this and other spending will result in a bleak budget deficit of more than half a trillion dollars in added debt in fiscal year 2015.

To put Obama's deficits into some perspective, President Bush's deficit in 2007, just before the economy fell into the recession, was a tame $179 billion.

Obama, who is a master at class warfare and flimflam political rhetoric, tries to sugarcoat all this spending and added debt by saying "Our budget is about choices, it's about values."

"As a country we've got to make a decision if we're going to protect tax breaks for the wealthiest Americans or if we're going to make smart investments necessary to create jobs and grow our economy," Obama said.

But if you read the fine print in Obama's budget, you'll see a shocking forecast that the Post says -- in a massive bit of understatement -- "does not paint an overly optimistic picture of economic growth."

After trillions of dollars in new spending, the president's budget forecasts that the economy will slowly grow by a mediocre 2.6 percent a year over the next decade. That's not anywhere near the economic growth rate needed to bring the jobless rates down to normal levels, let alone keep up with worker population growth, economists say.

The American economy is certainly capable of doing a lot better than that, but only with policies and incentives to unlock trillions of dollars in investment capital that's been sitting on the sidelines since Obama took office in 2009.

In addition to sweeping tax reforms to cleanse the tax code of loopholes and exemptions, and lower the rates --for which Obama pays only lip service -- we need to curb the cost of government that is smothering our economy, killing jobs and reducing economic opportunity.

When Obama became president, the annual budget was just a little more than $3 trillion. In just his sixth year in office, he's calling for a nearly $4 trillion budget which will be well over that threshold by the time he leaves office in January, 2017.

A federal budget that is growing by more than a trillion dollars every eight years is a prescription for economic disaster that needs to be fixed, and fast.

But Obama is not the least bit interested in any serious budget cutting, unless it is whacking away at our defense needs. He's even given up doing anything on entitlements.

It didn't get much attention last week, but he dropped any mention of using a less-costly measure of inflation for cost-of-living increases in Social Security benefits.

Obama prefers to use the word "investments" when he talks about his big spending plans, but government audits and a trail of debts show he's wasted billions in tax dollars and has created relatively few permanent, full time jobs.

"A billion here, a billion there and pretty soon we're talking real money," the late Sen. Everett Dirksen used to joke in the 1960s.

Flash forward to Obama who's upped the numbers to a trillion here, a trillion there. And he isn't joking.