Drilling Below the Surface of Obama's Dreadfully Weak Economic Numbers 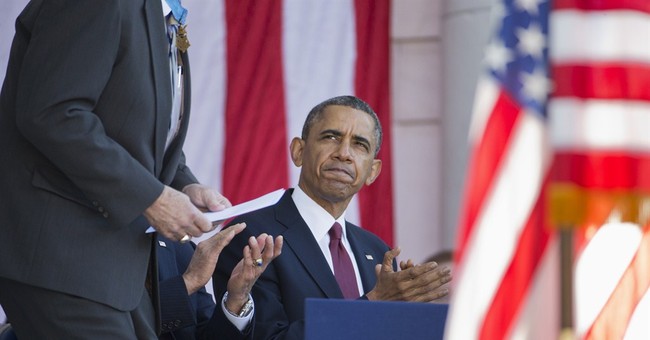 Barack Obama's presidency is falling apart, as a growing number of Americans now realize his promises of prosperity and jobs were bogus and his health care law a fabric of lies.

A president who promised hope and change has given us despair and a failed,1930s agenda, as a once-mighty economy continues to limp toward the end of its fifth year in "recovery" -- yet with no full, lasting recovery in sight.

Twelve months ago, a majority of voters handed him a second term. This week, the Gallup Poll reported that a 54 percent majority disapprove of the job he's doing -- or not doing -- take your pick.

Public opinion polls, including Gallup's, report his job approval polls shrinking to 40 percent and lower in some surveys, a precipitous decline in so short a time.

In the past week alone, Obama was forced to apologize to millions of Americans who've lost their health insurance under Obamacare, despite his promises they could keep their present medical care policies and that no one would take that away from them. "Period."

It was a tepid apology at best and a politically dishonest one at worst, saying he was "sorry that they, you know, are finding themselves in this situation, based on assurances they got from me."

He had signed the Obamacare bill into law, knowing it would require that future insurance policies include a long line of costly new benefits for maternity, pediatrics, birth control and other things, whether you needed them or not. Policies that didn't contain them, in many cases because older Americans don't need them, were cancelled.

Obama and senior White House officials insist neither he nor they knew this would happen and blamed insurance companies. These are the same people who promised the online application system was fully operational and ready to go, when preliminary tests clearly showed it was not.

These are the same people who are predicting that tens of millions of Americans would sign up for Obamacare at a level needed to make the program financially viable. So far, applications have been pathetically small.

While the news media has been entirely focused on the Obamacare debacle, the government's latest monthly data reveal new weaknesses in his underperforming economy.

First came last week's economic growth rate that shows the economy grew by 2.8 percent in the third quarter. But several news reports on this unexpectedly higher number pointed out that the preliminary estimate of the nation's gross domestic product (GDP) "masks weakness in the U.S. economy."

Economists said that when they looked at all the base numbers behind that 2.8 percent, there's less there than meets the eye, if you excuse the expression.

Consumer spending has slowed down amid widespread uncertainty that has long plagued the Obama economy, so inventory buildup is expected to be smaller in the fourth quarter that will slow future growth.

While the nightly network news shows touted the GDP number, which was expected to come in around 2 percent, economists said it was full of holes.

The economic report was "deceptively weak," said Alan MacEachin, the Navy Federal Credit Union's corporate economist. "You drill down below the surface, and you can see what's going on."

For example, exclude the temporary business inventory build-up, and the economy really grew by just 2 percent.

Consumer spending accounts for two-thirds of all GDP, and the report showed spending growth had slowed down to a weaker 1.5 percent annual rate.

"This is not an economy that is firing on all cylinders," said James Marple, senior economist for TD Economics.

Yet the total labor force continued to shrink as many more discouraged jobless people have stopped searching for work.

About one third of the nation's 11.3 million jobless have been looking for work for six months or more. The Bureau of Labor Statistics reported that 720,000 of them dropped out of the labor force in October and thus are no longer counted as unemployed. The Post's Mui called that "an unusually large decline."

When you add in part-time workers who want and need full time work and discouraged drop out workers, the true jobless rate becomes 13.8 percent, says economist Peter Morici at the University of Maryland School of Business.

It would take 360,000 new jobs a month to pound the unemployment rate down to 6 percent, but "that would require GDP growth in the range of 4 to 5 percent," Morici says. Under Obama, GDP growth over the last four years has been a minuscule 2.3 percent.

Democrats and the White House say stronger economic growth isn't possible in the age of "the new normal." But just four years into the Reagan recovery, economic growth was a robust 5.8 percent, and job creation was soaring,

You rarely or never hear Obama's name mentioned in any of the economic news stories about all this. But if you're looking for the chief reason why our economy is still in this mess, it begins and ends with him.