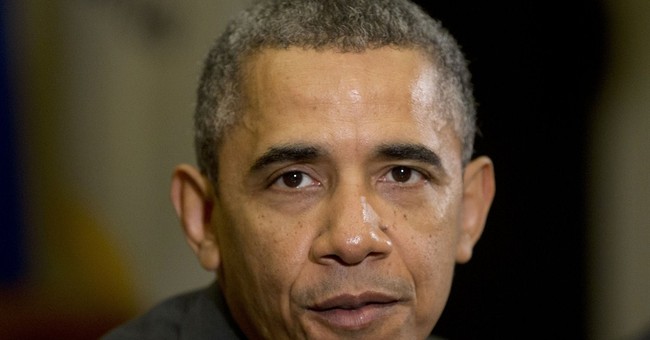 The media frenzy over the relatively short, 16-day budget war led to widespread forecasts that it would result in massive Republican losses in the 2014 midterm elections. Don't bet on it.

To be sure, the fallout is still being measured across the country by election handicappers. But it seems doubtful that Democrats are going to win a lot of seats on the basis of a transitory event.

Not when public opinion polls show far more important issues weigh much more heavily on the minds of most voters.

While polls showed voters blamed Republicans more than Democrats at the time, many also blamed Democrats as well as President Obama for the government shutdown.

Politics can be a fickle business, and yesterday's battles soon fade as the focus shifts to more important bread and butter issues that affect people in their day to day lives.

As the memory of the shutdown recedes, the attention of the voters has furiously turned against Obama and the issues they identify with the ruling Democratic party.

Widespread anger over the problem-plagued rollout of the Obamacare law and its harmful impact on millions of Americans who've lost their jobs, or have seen their health insurance policies cancelled, is going to have a big impact on next year's elections. But more on this in a moment.

First and foremost is the weakening Obama economy and jobs, issues that are likely to intensify as we move into the 2014 election year. Economic growth continues slow, and, with it, a steady decline in full-time jobs.

On Thursday, the administration will announce its third quarter economic growth rate that is forecast to come in at an anemic 2 percent increase, down from the 2.5 percent gain in the second quarter. That's not good.

On Friday, the Labor Department will report the jobless rate for October that was expected to push unemployment up to 7.3 percent from September's 7.2 percent.

At the same time, Gallup's daily, nationwide tracking poll shows Obama's poor job approval score dropping to a 40 percent low -- with a 53 percent majority of all Americans surveyed now saying they don't like the job he's doing. That is, if he's on the job at all.

In recent weeks, his critics, including some in his own party, have pointed to his notorious inattention to detail in making executive decisions. He gives a lot of speeches, but in policy making and governing, he's been a bystander.

William Galston, who was President Clinton's domestic adviser, recently suggested that Obama doesn't seem to like getting involved in the details of governing -- in "the legislative process or the implementation process or the administrative... process."

That's when things can go amiss, as we've seen on so many occasions in his presidency, the latest one being the Obamacare disaster. And when things start to go wrong, Obama "gives every appearance of being blindsided by the flow of events," Galston told The Washington Post.

That's when "people start wondering if he's in charge, if he's a strong leader," he said, as they are doing now in the latest Gallup polls.

Hubris, the exuberant belief that one knows everything, is a very dangerous quality in a president, and Obama is all hubris.

The most stunning example of this was reported this week by the Post about how Obama rejected the advice of his top advisers who, just two months after Obamacare's enactment, gave him a four-page memo with an ominous warning.

That document, written by a trusted, outside adviser on health care, told him no one in the administration was "up to the task" of putting the complicated 2,000-page law into practice and building a massive, smoothly run, nationwide bureaucracy to run it.

Debate raged for weeks, with senior advisers begging him to seek an outside, heavy weight executive with a lot of experience in "business, insurance and technology." In the end, Obama rejected that advice and put his own team of insiders in charge, led by Nancy-Ann DeParle, director of the White House Office of Health Reform.

Obama's insular decision led to taking a law, that was unworkable to begin with, and turned it into an emerging financial, technological, economic mess we see now.

"They were running the biggest start-up in the world, and they didn't have anyone who had run a start-up, or even run a business," David Cutler, a Harvard professor and health policy adviser to Obama's 2008 campaign, told the Post.

Next November, the American people will go into the nation's voting booths to decide which party will control Congress for the next two years. But it's unlikely that they going to be voting on last month's shut down.

Far more likely, they will be voting on Obamacare which was unpopular before its rollout and is even more so now that people are experiencing its unintended -- and maybe its intended -- consequences.

They will be voting to express their deep disapproval of Obama's inability to strengthen the economy and make it work by creating good paying, full-time jobs.

Republicans now have a 234-201 majority in the House and the Democrats will need a net gain of 17 seats to take control again. That's very unlikely.

In the Senate, Republicans would need a net gain of six seats to win control. Just before the shutdown ended, top handicapper Stuart Rothenberg saw a likely GOP gain of "between 3 - 6 seats" but acknowledged that "the damage to the national Republican Party is considerable."

But there won't be a replay of the shutdown next year when the budget deal expires, because the focus will be on the Democrats and their Obamacare law -- just where the GOP wants to keep it throughout 2014.

Obama won't be on the ballot next year, but it will be a referendum on his presidency and everything Americans dislike about his economy and the health care law that has robbed them of their freedom to keep the medical policies they like and want to keep.