Kicking the Budget Can Down the Road 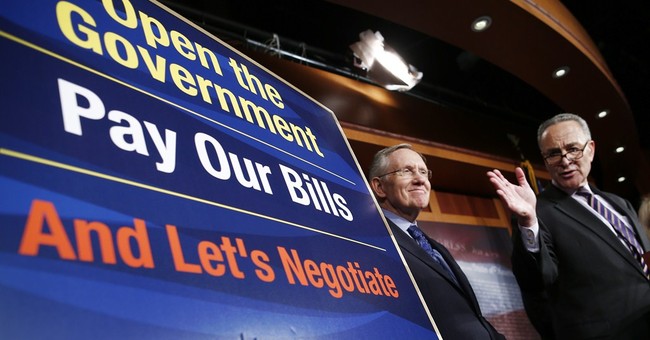 As the government's partial shutdown enters its third week, the smell of an inconclusive deal is in the air, though one that has status quo written all over it.

After all the sound and fury over defunding Obamacare, or even delaying it, that issue has vanished for now as the attention turns to a grab bag of palliatives in the Senate to temporarily suspend the standoff and raise the debt ceiling for at least a few more months.

The intense negotiating battle going on behind closed doors is about how short or long the extension will be and what else each side gets in other provisions to seal a deal that can win a majority in both chambers.

Some of the options included repealing, or delaying, the tax on medical devices, tightening loose income rules on insurance subsidies under Obamacare, and Democrat demands to abandon the automatic sequester spending cuts.

Clearly, Congress -- including some of its most fire-breathing conservatives -- appears ready for a deal. "We need to get an agreement and open the government back up," says libertarian Sen. Rand Paul of Kentucky.

Even Texas Sen. Ted Cruz sounds like he may be open to a time- out, telling reporters, "We need to see what the details are."

If conservatives intend to hold out for a make-or-break deal, the automatic sequester cuts must be at the top of their list of demands. Love it or hate it, it's the only tool that has effectively kept a lid on spending.

The White House and the Democrats want to repeal it, because it's cutting into their favorite giveaway programs. But a new Congressional Budget Office report now shows that in the first 11 months of the 2013 fiscal year, outlays were $127 billion less than last year.

When CBO comes out with its final accounting for 2013, "overall federal spending may have fallen two years in a row for the first time since the end of the Korean War," the Wall Street Journal reports.

Moreover, a new report by the Congressional Research Service shows the sequester cuts have also been one of the most effective deficit-reduction weapons since the 1980s.

"In nominal (i.e., not adjusted for inflation) terms, the Budget Control Act achieves the greatest amount of deficit reduction of any act since 1988," the report says.

For nearly five years now, President Obama has been demanding that we raise income tax rates to reduce the deficit (even though he really wants to increase spending). But the sequester provisions in the 2011 budget act are reducing the deficits entirely by spending cuts.

Obama keeps telling us the sweeping sequester cuts -- slicing about 5 percent from discretionary federal outlays (8 percent in defense) -- are hurting our country.

But a recent United Technologies-National Journal poll asked Americans, "Have you seen any impact of these cuts in your community or on you personally since they took place, or not?" The answer: 74 percent said they have seen no impact, while only 23 percent said they had.

Sure, a negotiated budget for the entire fiscal year that makes specific cuts in wasteful, duplicative programs that cry out for the axe would be far more preferable. But that doesn't appear to be in the cards, at least not in the short-term.

In the absence of that, the sequester should be kept in place to reduce spending over time. It is the GOP's ace in the hole in any future, long term, budget-cutting deal.

As this is written, Senate leaders are crafting a bill they hope to bring to a vote before Thursday's presumed debt-ceiling extension deadline. The House was working on its own proposal which the White House shot down Tuesday. But that may be one, last gasp attempt by the GOP's hard-line, tea party bloc to challenge the Senate establishment.

Rock-ribbed conservative Rep. Raul Labrador of Idaho spoke for many of his colleagues this week when he complained that too many Senate Republicans were "pussyfooting around" in budget fight.

"The problem with Senate Republicans is that they always want to have a fight the next time," he told CNN.

Whether the two houses can agree on a path forward remains unclear. House Speaker John Boehner has said he will not bring a bill to the floor that does not have the support of the Republican conference. But he has been in close talks with Senate GOP Leader Mitch McConnell (the father of the sequester plan) who is that chamber's most skillful deal-maker.

It's unlikely McConnell would want to send a bill over to the House that had little, if any, chance of passage. But it also seems unlikely that any budget bill backed by Senate Democratic Leader Harry Reid and Obama can't win a majority in the GOP-controlled House, either.

The political pressure on both sides of the aisle is getting intense. Both parties are being pounded in the polls, and Obama's job approval score has plunged to 41 percent -- with 53 percent voicing disapproval, according to Gallup's daily tracking survey.

His numbers would be even worse if the unemployment rate had been announced last week. Economists expected a weak job creation number, but the administration said it could not release September's figures because of the shut down. Sure.

When this round in the budget battle is over, and it will be over -- probably sooner than many expect -- there will be a lot of painful soul-searching among Republicans in the weeks to come. About legislative strategies and future policy making and political tactics.

No issue fuels more anguish than the economy. Gallup finds that 47 percent of Americans say they're "struggling" and five percent say they're "suffering."

Republicans should be pounding Obama every day on this issue. Yet they shoved it to a back burner or ignored it completely in the budget battle debate as the government shut-down became an all-consuming, political black hole.

For the besieged Obama White House, the shut down was an unexpected yet welcome political gift.