The Race Is On: Hillary's Running, Christie's Throwing Punches, And The Republican Field Is Growing 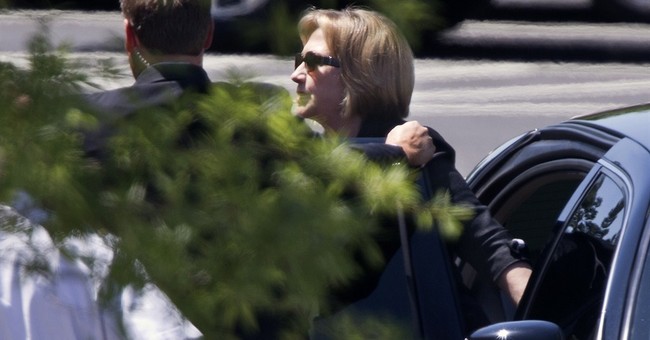 The 2016 presidential marathon began this week when Hillary Clinton had a very visible, heavily-promoted White House lunch with President Obama, and New Jersey Gov. Chris Christie threw a political punch at one of his potential rivals for the Republican nomination.

If there were any doubts that the former secretary of state plans to run for president, they were put to rest when Hillary and Obama had lunch on the patio outside the Oval Office on Monday.

The White House photographer, Chuck Kennedy, took pictures of the tete-a-tete that were immediately beamed around the world, sending a clear message the Clintons were gearing up to take back the presidency. And maybe Obama was ready to help them do that.

Some of the president's senior campaign aides were already working for the former New York senator's Ready for Hillary super PAC. Mitch Stewart and Jeremy Bird, who had managed Obama's field operations in 2008 and 2012, have joined her PAC operation.

The national news media was also preparing to promote her candidacy well in advance of the 2015-16 presidential election cycle. NBC announced over the weekend that its entertainment division is working on a miniseries about her political and personal life.

And CNN -- long known as the Clinton News Network -- announced it has hired a top documentary filmmaker to produce a feature-length movie about Clinton's political career. Talk about friends in high places.

The White House billed the luncheon as "chiefly social" and nothing more than just two friends "to get a chance to catch up." But it was so much more than that. Was Obama sending an early signal he intends to support Clinton three and a half years from now?

There were signs he was doing that. The biggest came earlier this month when Obama's chief campaign strategist and closest political adviser, David Axelrod, seemed to be endorsing her for the nomination during an appearance on MSNBC's "Morning Joe."

"I think Hillary Clinton probably will be the candidate," Axelrod said.

Vice President Joe Biden was also said to be mulling over a bid for the top job himself. But there appeared to be relatively little support among the party's hierarchy for the former Delaware senator (known for putting his foot in his mouth) whose own presidential bid fell flat in 2008.

Clinton and Biden also quietly met this week at the vice president's official residence over breakfast. Did she tell him of her plans to run? Possibly.

Clinton's been giving a lot of speeches around the country and being coy about her future plans, but the real political question about her candidacy is what will she run on?

She was handed the job of secretary of state without any serious foreign policy credentials of her own and had zero diplomatic successes during her entire four-year tenure. When she left office, the Middle East was a war zone, the problems with Russia, China, Iran, were worse than ever. The administration's relations with Israel were frosty, at best.

And what can she possibly say about the past six years of a weak, jobless economy? She was part of the Obama cabal who defended it or looked the other way.

Insiders say she has her own ideas about economic policy, but so far she hasn't been willing to address the biggest failure in Obama's presidency.

Meantime, there's a large and growing field of potential Republican contenders who believe a majority of voters will be fed up with this administration and the big-spending Democrats in 2016.

It's shaping up to be the GOP's strongest field in years, including leading governors and former governors from major electoral states, and some freshmen senators who are already drawing substantial party support.

Gov. Christie, the tough-talking, political heavyweight who is cruising to re-election in heavily Democratic New Jersey in November, threw out the first punch in the GOP sweepstakes this week.

Troubled by the large number of House Republicans -- 40 percent of the GOP conference -- who voted to restrict how the National Security Agency traces phone records to combat terrorist plots against the U.S., Christie lashed out at libertarians. He mentioned no names, but Sen. Rand Paul of Kentucky, a potential presidential rival, has been one of NSA's sharpest critics.

Speaking as "a former prosecutor who was appointed by President George W. Bush" on the day before the Sept. 11, 2001 terrorist attack, Christie said: "I just want us to be really cautious, because this strain of libertarianism that's going through both parties right now and making big headlines, I think, is a very dangerous thought."

Christie's remark was not only aimed squarely at Paul, but also was meant to stake out an early position as a strong defense hawk in the mold of Ronald Reagan in an era of mounting terrorist threats to America's homeland.

Christie's rising star in the GOP comes at a time when the party is looking for a fearless, no-nonsense leader who doesn't pull his punches. His popularity cuts across party lines and, yet, he is one of the most sought-after speakers in the Republican party. And he's clearly running in 2016.

Other GOP governors are weighing their chances at a time when Americans may be hungry to replace Obama with someone who is not a big spending creature of Washington.

Ohio Gov. John Kasich, who has cut the state's budget and turned its economy around, is running high in the polls right now. If he wins re-election in 2014, he will be a strong contender from a pivotal state Republicans need to win if they are to take back the White House.

Wisconsin Gov. Scott Walker became a conservative hero when he fought the state's powerful, public-employee unions, overcame a recall election, and cut back the size and cost of government. If he wins re- election next year, which now seems likely, he has bigger ambitions in mind.

Several freshman senators are also at the top of the presidential list, including Marco Rubio of Florida, another battleground state, Rand Paul who appeals to a large bloc of libertarian voters who've given the GOP a much needed dose of new energy, and Ted Cruz of Texas who is winning rave reviews for a speaking tour of Iowa two weeks ago.

But 2016 may be shaping up as the year of the outsider. Of the last 10 presidential elections, seven of the winners were governors.

When America gets into trouble, voters begin looking for a proven chief executive who doesn't need any on the job training.