Disobeying the Neighborhood Watch Rule to 'Stay In Your Car' 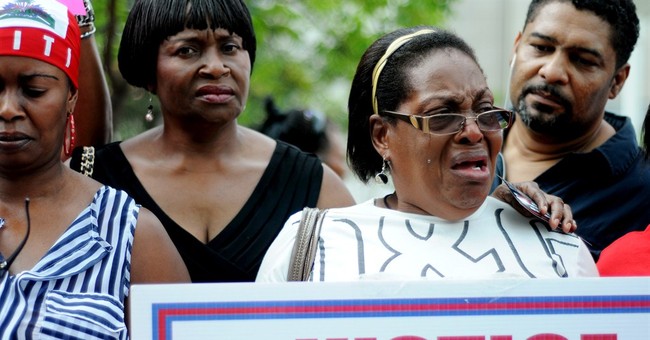 The polarizing racial and legal debate over George Zimmerman's acquittal in the shooting death of an unarmed black teenager in Florida has been turned into a national political issue that's not going away anytime soon.

President Obama's made sure of that in his public plea to the nation Friday to "do some soul-searching" over what led to the killing of this 17-year-old and whether we can "learn some lessons from this and move in a positive direction."

I've been one of Obama's persistent policy critics from the beginning of his presidency. But I have to say I found his measured, sensitive remarks very moving as he talked of our nation's racial history and the troubling, personal experiences he endured as a young African-American man making his way through life.

He certainly identified with Trayvon Martin, saying in his earliest remarks on the shooting that if he had a son, he'd look like Martin.

"Another way of saying that is Trayvon Martin could have been me 35 years ago," he said in the White House press room last week.

Clearly, the president felt he had to address this tragic, incomprehensible loss of a young life in much deeper and broader terms that reflected the nation's racial history and the Stand Your Ground law under which Zimmerman was found not guilty.

In the end, a jury of six women concluded that this gun-carrying, self-appointed neighborhood watch volunteer's act didn't merit conviction for either second degree murder, nor the lesser manslaughter charge.

There were hints in the aftermath of their decision that some of the jurors believed that Zimmerman was guilty of some crime but in the final analysis they accepted the defense argument that he feared for his life in the fight that occurred before he shot Martin in the chest.

Still, for this reporter, the story that unfolded on the night Trayvon Martin was walking to his father's home in the gated community in Sanford, Fla., is awash with troubling facts that made this killing so senseless.

The defense focused its case on the fierce fight at the end of their encounter and not at the beginning when George Zimmerman decided to follow Trayvon. Stalk might be a more accurate word.

This wannabe policeman -- who has a history of getting into trouble with the law -- was sitting in his car when he spotted Trayvon, then called the 911 police dispatcher to tell her, "He looks suspicious."

Is this racial profiling? The prosecution thought so. What was suspicious about him? He wore a hooded pullover as he walked home after getting a soft drink and some candy at a local convenience store. But he hadn't done anything wrong and not an iota of evidence was offered in court to the contrary.

"Are you following him?" the police dispatcher asked Zimmerman who replied that he was. "Don't do that," she said, ordering him to stay in his car.

I was a neighborhood watch volunteer for several years in my local community and one of the ironclad rules was "Never leave your car" under any circumstances when you see suspicious or criminal activities. Call the police first and report what you see. Zimmerman, who had delusions that he was in law enforcement, disobeyed this order.

He tracked Martin through the community until at some point the two were engaged in a fight. Zimmerman said he was attacked first by young Martin, but the prosecution said he was lying and that Zimmerman had precipitated the confrontation.

Certainly, Zimmerman was stalking Trayvon, and not the other way around. Trayvon, frightened at the prospect of a burly stranger following him in the dark, stopped and turned to confront him, and one thing led to another.

But Florida legislators say that their Stand Your Ground law cannot be a defense for anyone to pursuing someone else. State Rep. Dennis Baxley says "There's nothing in this statute that authorizes you to pursue and confront people." Florida state Sen. Durrell Peadon, a sponsor of the law, flatly says Zimmerman "has no protection under my law."

The president addressed this issue in his remarks last week. "I just ask people to consider if Trayvon Martin was of age and armed, could he have stood his ground on that sidewalk? And do we actually think that he would have been justified in shooting Mr. Zimmerman, who had followed him in a car, because he felt threatened."

I believe Stand Your Ground laws are needed but do they apply to George Zimmerman's case?

Florida's law -- similar to the ones enacted in more than 20 states -- says individuals may use deadly force if "he or she reasonably believes that such force is necessary to prevent imminent death or great bodily harm to himself or herself or another."

The law does allow people in certain instances to pursue and confront others and those provisions may be in need of tightening. But did Zimmerman believe such force was "necessary to prevent [his] imminent death or great bodily hard to himself"?

The medical examiner who looked at Zimmerman's head wounds testified that neither they, nor the bloody nose he got from Trayvon's blows, were "life threatening."

Besides, in this altercation, Zimmerman, who insisted he feared for his life, clearly had the upper hand: his gun.

He could have pulled out his gun during the wrestling match, stopped the fight, and called 911 for the police. But what would he have said? I was following Trayvon and he jumped me?

With his gun trained on Trayvon, he could have left the scene and gone to the police to report what happened. He could have fired into his leg or his shoulder to subdue him. He had several defensive advantages over this unarmed, frightened youth, but he chose only one.

Zimmerman pressed the barrel of his gun into Trayvon's chest just over his heart, pulled the trigger and killed him, because, as the prosecution said, he wanted to.