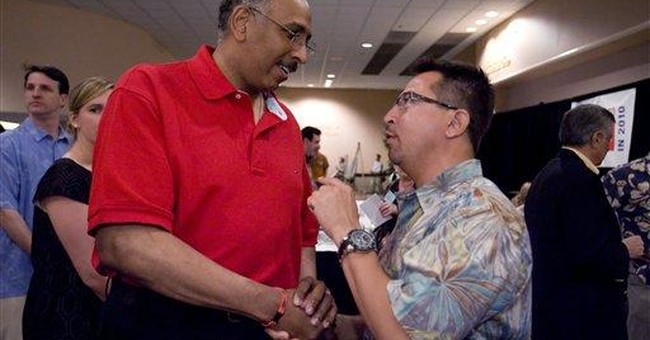 WASHINGTON - Republican National Committee Chairman Michael Steele is in trouble again, and at a time when the GOP is riding higher in the polls and poised to make major gains in governorships and Congress in November.

His troubles stem in large part from his weakness as the chief executive of the party's largest campaign organization that usually plays its biggest and most pivotal role in presidential election cycles. He's done a poor job of picking top talent to handle the nuts and bolts work of managing the RNC's vast organizational force efficiently and effectively.

As the party's most visible salesman, Steele has, according to many state chairmen, done an effective job of selling the GOP's message, leaving the hands-on work of managing the RNC to others. However, that's partly what got him into trouble.

At first, grumblings from a small number of RNC committee members about his new book and some paid speeches he gave to trade organizations and other non-party groups didn't amount to much at the RNC's winter meeting in Hawaii, and Steele was able to overcome the grousing with ease.

But then came the fateful decision by an RNC functionary to approve a $1,900 bill for a party for younger donors at a West Hollywood nightclub that featured exotic, topless dancers. It has been a huge embarrassment for the party as well as Steele, who did not attend the party and presumably knew nothing about the RNC payment.

When the smoke cleared from the media explosion, Steele fired the lower-level functionary and also demanded the resignation of his chief of staff, Ken McKay. But the damage was done and some party leaders are now wondering if Steele can and should keep his job.

Effective executives put the right people and fail-safe procedures in place to make sure that a mistake like this does not happen, and obviously that has not been done on Steele's watch. He has taken corrective action quickly, but the question remains whether it is enough and if he can put this behind him and go on to do what he does best: help sell the party to a divided electorate and raise money for the GOP's campaigns to come.

One of the major criticisms of Steele's chairmanship has been about fundraising and how that money has been spent, and to some degree the criticism has been unfair.

Steele has raised a lot of money for the RNC, particularly in the 2009 off-year election when fundraising tends to fall after a presidential election. Since his election, the RNC has raked in nearly $100 million, but he has spent a lot, too -- some say too lavishly -- on party events and expenses that include private jet travel, limousine rentals, and the hotel and catering services that are part and parcel of the meetings and donor receptions that pay the party's bills.

At the same time, Steele has spent heavily on key off-year races, too, especially in the Virginia governor's race where he invested nearly $10 million that is credited with helping the get-out-the-vote effort that led to Bob McDonnell's victory. His record includes Chris Christie's gubernatorial win in New Jersey and Sen. Scott Brown's stunning victory in Massachusetts.

However, the heavy money isn't coming from the RNC but from the House, Senate and gubernatorial campaign committees, and the GOP is raising a lot of money in a year that has all of the signs of a wave election.

Mississippi Gov. Haley Barbour, the former RNC chair, has been raising tens of millions of dollars for the GOP's Governors Association and had $31 million cash on hand last week. Officials at the Republican Senatorial Committee and the Republican Congressional Committee say their contributions have increased lately while RNC's have fallen as a result of the latest controversy about Steele's leadership.

Meanwhile, all of the signs coming into the GOP's campaign committees during the congressional spring break recess show that the voters' focus is on the local races back home where Republicans are leading in pivotal House and Senate battlegrounds. Town halls are said to be packed with voters protesting the Democrats' health care plan.

What all of this shows is that the voters are focused on the important matters, and whatever troubles Steele has at the moment is not going to affect the outcome of the midterm elections when Republicans will potentially win 20 to 30 House seats, pick up half a dozen Senate seats, and win a number of Democratic governorships in key states that will affect House redistricting next year to the GOP's advantage.

For the time being, Michael Steele has a lot to offer his party, but he'd better get his act together first.