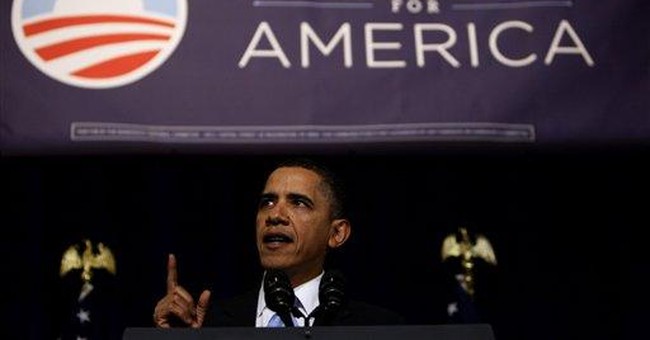 WASHINGTON -- Whenever President Obama's policy ideas run into trouble, he calls for a summit to seek a solution to his problems. It's his all-purpose, eleventh-hour, fallback gimmick to show he is suddenly open to new ideas after the old ones failed or were blocked in Congress.

Consider last year's White House summit -- a highfalutin term for a standard meeting -- to come up with ways to create jobs that gathered together a bunch of largely Democratic interest groups. (The Chamber of Commerce, whose members create a lot of jobs, was conspicuously left out.)

If you don't remember the results of that meeting last year, you no doubt recall the unemployment rate, which today is at nearly 10 percent (17 percent if you count discouraged workers who have stopped looking for jobs or those working part time). This is after the enactment of a nearly $800 billion stimulus bill that stimulated the budgets of a lot of government agencies, but created few if any new, permanent jobs.

By calling for a summit to help him fix a problem that he wasn't solving, he was admitting that his big-spending ideas were not working. Obama eventually decided to continue doing what had failed by proposing a second stimulus bill, which is now pending in Congress. The economy lost 20,000 jobs last month.

Now Obama is calling for another summit on his healthcare legislation, which has run into a brick wall in Congress -- despite his huge Democratic majorities -- because a majority of Americans do not like his government-run $2.5 trillion plan.

The White House and Democratic leaders blame Republicans for the impasse, but House Speaker Nancy Pelosi admits that she does not have the votes in her own party to pass the bill that Senate Democrats sent her.

So the president, who believed he didn't need the Republicans to pass his massive universal-healthcare bill -- and did not utter a single complaint when Democrats excluded them from any role in writing the bills -- now says he wants to hear their ideas at a summit on Feb. 25.

But House Minority Leader John Boehner of Ohio and Minority Whip Eric Cantor of Virginia sent signals this week that they were not interested in helping Obama save an unworkable plan that they correctly believe will plunge our country into irretrievable debt and insolvency, destroy jobs, and wreak havoc with the finest healthcare system in the world.

Obama's half-day summit, they soon learned, would be built around his pending healthcare legislation, which Republican leaders think should be scrapped entirely and that Congress should start over with a completely new approach that includes the GOP's ideas to broaden access to more affordable health care.

"If the starting point for this meeting is the job-killing bills the American people have already soundly rejected, Republicans would rightly be reluctant to participate," the two leaders said in a letter Monday night to White House Chief of Staff Rahm Emanuel.

"Bipartisanship is not writing proposals of your own behind closed doors, then unveiling them and demanding Republican support," they wrote. "Bipartisan ends require bipartisan means."

But the White House's response made it clear that the president, despite all of his talk of coming together in a spirit of bipartisanship, isn't budging an inch from the Democratic healthcare bills he has embraced.

"He's been very clear about his support for the House and Senate bills," White House Press Secretary Robert Gibbs said in a statement Monday. "The president looks forward to reviewing Republican proposals that meet the goals he laid out at the beginning of this process," Gibbs said, adding that Obama was "open to including any good ideas that stand up to objective scrutiny." You can imagine how objective that would be.

Apparently the president learned absolutely nothing from the stunning political message from Massachusetts' voters who sent Republican Scott Brown to Washington to fill the late Sen. Edward Kennedy's seat on a platform of voting "no" on Obamacare.

Nor has the White House been willing to acknowledge that Democratic support for his legislation has declined as a result of that election and that polls show even stronger public opposition to his healthcare takeover plan. What doesn't he understand about Pelosi's admission that "we don't have the votes"?

The televised summit Obama proposed Sunday is just grandstand play by the White House. The art of legislative deal making is done behind closed doors through tradeoffs and breakthrough compromises, and even a willingness to start over.

In the end, Obama's aloof, hands-off, above-it-all approach to his healthcare agenda was a failed strategy that was doomed from the beginning. Obamacare is dead. The sooner the White House understands this and accepts it, the sooner Washington can move on to a much more pressing issue: jobs and unleashing the power of American capitalism to build long-term economic growth.

But that's another failure by this presidency that no televised summit is going to fix, especially when you arrogantly leave out the major business groups that create most of the jobs in this country.