Thank Obama for the Weak Recovery 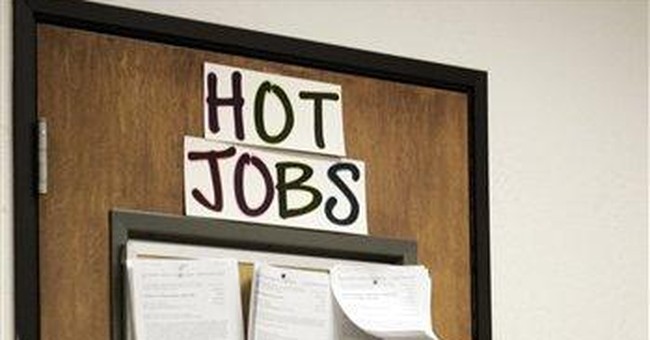 WASHINGTON -- There is no question the economy is now in the early stages of recovery, though it has a long way to go before it gets back on its feet again and regains full health.

While there are a number of tentative but hopeful signs of a comeback, the big question (outside of who is responsible for the turnaround) is how strong will the recovery be. Some say it will be subpar when compared to previous recoveries. I don't underestimate American capitalism's ability to adapt and overcome difficult economic circumstances -- it has done so many times before -- but the administration's spend-and-tax policies are not the kind of prescriptions that have fueled meteoric growth in the past. It's hard to talk about the prospects of recovery with a 9.7 percent jobless rate, the highest in 26 years, which analysts predict will soon hit 10 percent. There were 14.9 million unemployed Americans in August and many more who have given up looking for work. More than 5 million have been unemployed for at least seven months. The unemployment rate, unfortunately, is one of the last key economic figures to show any improvement in a recovery, and that is likely to be the case this time as well.

The administration's efforts to make much of the fact that the rate of job losses has slowed are of little consolation if you are among those who have lost a job.

Nevertheless, it is important to note the early recovery signs if only to track where the economy is beginning to improve and where it remains in a deep hole.

Last week, the Federal Reserve's "beige book" said the economy remains fragile, with sporadic signs of improvements in different regions, but overall has begun growing again. Among the good signs:

-- The U.S. manufacturing sector, which is so far down it's hard to see up, grew last month for the first time in 19 months. The Institute for Supply Management reported that its manufacturing index rose by the highest number since June 2007 and new orders increased to the highest level since the end of 2004.

-- U.S. home sales climbed more than expected this summer to the highest level in more than two years. Existing- and new-home sales have been rising for some months now, and that suggests both consumer confidence that things are going to get better and that banks are making loans again to creditworthy customers -- though the banking sector and loan demand remain weak. Still, the National Association of Realtors' index of sales contracts for previously occupied homes jumped by 3.2 percent in July -- its sixth consecutive increase -- and is 12 percent higher than a year ago.

-- Not too long ago, gloom-and-doom economists were forecasting the collapse of the global economy, with dire repercussions for our economy and American exports. But there seems to be a surprising recovery in a number of countries in Europe and in Asia. France and Germany say the recession has ended in their countries. China is pulling out of its nose dive; its exports were down sharply from last year but have improved in the past few months.

-- A number of economists are making bold forecasts that the nation's gross domestic product, the measure of all that we produce and sell, is growing again in the third quarter.

GDP shrank by 1 percent in the second quarter, but is expected to show a healthy increase in the current July-to-September period, possibly by 2 percent to 3 percent, though it may dip in the fourth quarter and the first quarter of 2010.

Who or what is responsible for the turnaround? President Obama and his top economic advisers claim that these and other signs prove that his $800 billion spending stimulus plan is working and putting people back to work. But there is no evidence that the relatively tiny amount of funds the government has dished out -- a bare 14 percent of the total -- has had any substantive impact on a once $14 trillion economy.

Remember the administration's claims about those "shovel ready" jobs in the construction industry that the stimulus bill was going to create? Well, the Associated General Contractors of America reported last week that "Construction workers account for almost one-third of all jobs lost this August as the industry remains the hardest hit."

And what about the Democrats' "cash for clunkers" scheme that was supposed to jump-start the American automobile industry. The $3 billion to $4 billion program, which made taxpayers co-signers of these deals, helped spark sales for a few months, but has petered out. Japan and Korea got most of the business, but other business sectors were hurt. The Fed reported that "used-car sales were adversely affected by the program."

The economy has begun growing again, owing to the Fed's actions to lower interest rates and pump liquidity into the markets.

But with unemployment rising, consumer spending flat, budget deficits in the stratosphere, and Obama's plans to impose even higher taxes on U.S. businesses and investors, don't be surprised if economic growth is slower and weaker than in previous recoveries.