The Crime Fighter Versus the Corruption Enabler 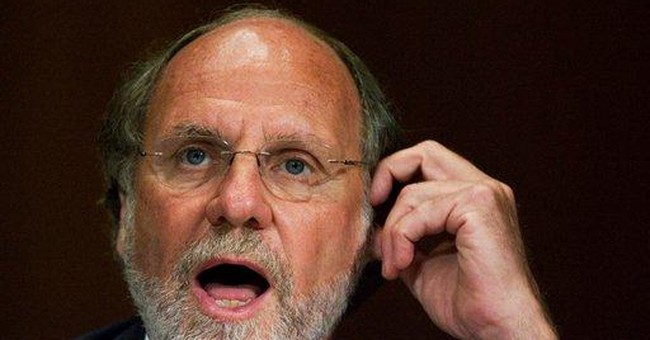 WASHINGTON -- Democrat Jon Corzine won the governorship of New Jersey four years ago pledging to bring needed change to a state defined by corruption and the highest property taxes in the country.

And four years later, things did change. The state's Democratic political establishment became more corrupt than ever and its tax burdens heavier than before, in part owing to a pay-to-play culture of corruption the governor did little to combat and a bunch of new fees and taxes that Corzine enacted in the midst of the recession.

Then along came U.S. Attorney Christopher Christie for the district of New Jersey, a beefy, crime-fighting paladin who promptly began filling up the state's prisons with scores of crooked politicians, including mayors, lawmakers and other elected and public officials.

Christie soon became the most famous crime fighter in the state and a breath of fresh air to its dispirited voters, and polls were showing the New Jersey Republican leading Corzine by double digits. He resigned his post in December and began a campaign to clean up Trenton, rebuild the state's battered economy through lower taxes, and enact a new code of stringent ethical reforms throughout the government.

But before Christie stepped down, he had won convictions or guilty pleas from 130 public officials and had put in place a massive, statewide investigative net that last month snared another 44 public officials -- with more arrests likely to come.

The latest arrests couldn't have come at a worse time for Corzine. They showed that statewide corruption ran deeper than even the most cynical observers had feared and that the only political solution was to install a reform government determined to clean house.

Christie doesn't mince words when he talks about who bears the lion's share of the blame, placing it squarely on the governor's doorstep.

According to New York Times story, Christie considers Corzine an "obvious bystander," an "enabler" of corruption and "the No. 1 financier of corrupt politicians and county bosses in New Jersey."

Heading into August, Christie had been leading by 10 to 14 points as Corzine's job-approval numbers tumbled. In the past month, however, the race has tightened slightly, as Democrats mounted a fierce counteroffensive, charging that Christie has skeletons in his closet that raise questions about his own credibility on ethical issues.

Among the charges: a 10-year, interest-bearing $46,000 loan that he and his wife made to a top aide in the U.S. attorney's office in need of financial help that he neglected to report on his tax filings or financial-disclosure forms. At a recent news conference, Christie apologized for failing to report the loan and said he had amended his tax filings. "When I make mistakes, I'm going to admit them. It was certainly nothing that I was trying to conceal or hide," he said.

But these and other charges have apparently cut into his lead, though Corzine's approval numbers remain in the basement. A Rasmussen poll last week showed Christie ahead with an eight-point lead, 50 percent to 42 percent, with 7 percent "not sure."

Even so, Corzine's job-approval numbers are very weak: 35 percent approve, while 65 percent disapprove.

"There is a natural tightening occurring. We've long expected it would. New Jersey is an overwhelmingly Democratic state, so we never expected a 14-point lead to hold," said Nick Ayers, executive director of the Republican Governors Association.

New Jersey's voters, who will go to the polls this November, have not elected a Republican to statewide office since 1997, and, though they may be turning against Corzine now, past elections often show that Democratic candidates tend to move into the lead in the race's closing weeks.

There is another big factor that works in the Democrats' favor. Corzine, a multimillionaire who made a fortune on Wall Street as a chief executive with Goldman Sachs, is self-financing his campaign and will easily spend $30 million to $40 million on his race. Christie, however, is abiding by state public financing and will have a total of $11.5 million to spend.

But maybe New Jersey voters have had enough of one-party rule and a state political machine that is one of the most corrupt in the country.

Republicans are optimistic that this time things are going to be different.

"Corzine can spend $40 million distorting Chris Christie's record, but what he can't change is his record over the past four years," Ayers said.

"Is corruption a big problem? Wow, is it," said Maurice Carroll, director of the Quinnipiac University Polling Institute. "Almost everyone in New Jersey thinks so. And two-thirds feel personally embarrassed to live in a state where politicians are pictured in handcuffs."