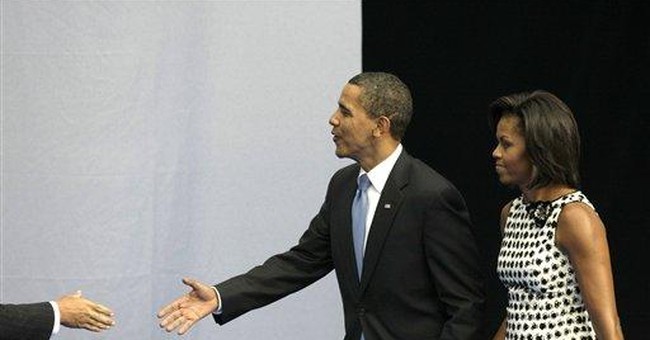 WASHINGTON -- The Obama administration's latest lame excuse for its failed stimulus-spending plan is that it underestimated the severity of the recession.

"We misread how bad the economy was," Vice President Joseph Biden said Sunday on ABC's "This Week."

The White House has been coming up with a lot of half-baked reasons why the president's massive $800 billion plan has not made a dent in the mushrooming unemployment rate, but this one was a beaut.

Misread? Throughout his presidential campaign and the early months of his presidency, Obama repeatedly compared the recession to the Great Depression when one-third of the workforce was unemployed. Even his economic advisers have since said that such a comparison to a decade-long depression is preposterous. But Obama kept comparing it to the worst economic catastrophe in modern American history -- if anything, exaggerating the recession, not underestimating it.

Biden, speaking for the administration, said it was unfair to say that the stimulus has been a failure, because "no one anticipated, no one expected that the recovery package would in fact be in a position at this point of having distributed the bulk of the money."

But not too long ago, the White House was predicting that the stimulus plan would soon be creating or preserving (which no one can verify with any accuracy) hundreds of thousands of jobs.

Then, when polls began showing increased public doubts that the plan was working, the administration said that it would begin "ramping up" the snail's-pace stimulus spending over the next 100 days.

Now Biden is saying that the plan is going to take more time than anticipated because so many of the contracts for construction and other public-works projects have only recently been completed or were still in the pipeline.

Critics of spending-stimulus programs warned of such delays last year when Obama was selling his idea to the nation, and later when it was about to be sent Congress. Even the Congressional Budget Office, the nonpartisan auditing arm of Congress, projected that the lion's share of the money would not be spent until 2010 when many economists said the recession would be over.

If doubts about Obama's spending scheme were growing last month, they were mushrooming last week when the U.S. Commerce Department reported that nearly a half-million jobs were lost in June -- pushing the unemployment rate to a 26-year high of 9.5 percent. Workers saw their weekly wages fall, too, as forecasters said the jobless rate would likely exceed 10 percent before year's end. Construction spending fell, as did consumer confidence.

Indeed, even administration officials are saying unemployment will get a lot worse before it gets better. "The unemployment rate will likely be higher in 2010 than in 2009," said Jared Bernstein, the vice president's chief economist and economic policy adviser.

The latest numbers not only rattled the White House but Democrats on Capitol Hill, too, including those who had a hand in crafting the deeply flawed stimulus bill, and there was talk of revising the plan and expanding it.

Senate Banking Committee Chairman Chris Dodd admitted last week that the big spending bill was not working the way Democrats hoped it would. If things grow worse, Congress might have to re-examine the plan and "do it again," he said.

"One of the mistakes that were made as we go about it ... we did not get these dollars into the job-producing sectors, a lot of it wasn't targeted as it should have been," Dodd told reporters.

But in a case of mixed messages, while Biden was still pleading to give the stimulus plan more time to work, the White House said last week that the package should be judged on its merits now.

When NBC's Chuck Todd asked presidential press secretary Robert Gibbs, "When should we judge the stimulus package, whether it's working or not?" Gibbs replied, "I think we should judge it, we should begin to judge it now."

But "obligated" is not the same as spending, and it does not mean the money has made its way into the economy's bloodstream. In fact, less than half that amount has been spent. And even if it had been spent, this is a paltry sum that would not make even a ripple in the once-mighty $14 trillion economy.

The administration seems to be divorced from economic reality. This plan is not going to create jobs.

When Obama proposed his plan, he said it must be "timely, temporary and targeted," but it is none of these. The bulk of the money will be spent when it's too late, it will not go to where jobs are needed, and it will saddle a weakened economy with another trillion dollars in debt.

Now the administration wants the American people to believe that it did not fully comprehend how bad things really were.