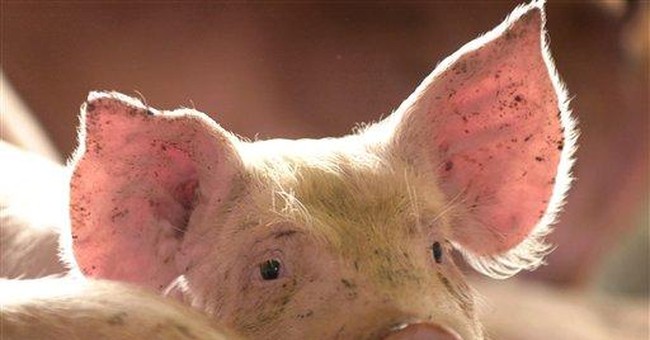 WASHINGTON -- When President Obama boasted that there wasn't "a single pet project" or "single earmark" in his economic-stimulus bill, he was using a slightly different definition of pork-barrel spending.

In fact, there were a number of pork projects in the bill, no matter how one defines them. We know, because Calvin Woodward, an enterprising Associated Press reporter, explained how the president singled out local projects that will be bankrolled under his nearly $800 billion recovery bill.

On a trip to Elkhart, Ind., to promote his massive spending program, Obama told residents how they would benefit from the stimulus money that would pay for "roads like U.S. 31 here in Indiana that Hoosiers count on."

"I know that a new overpass downtown would make a big difference for businesses and families right here in Elkhart," Obama said. In other words, provisions in the bill were designed, or "earmarked," for specific projects.

For example, Woodward reported last month, Obama's bill contains $2 billion "for a clean-coal power plant with specifications matching one in Mattoon, Ill., $10 million for urban canals, $2 billion for manufacturing advanced batteries for hybrid cars and $255 million for a polar icebreaker and other "priority procurements" by the Coast Guard.

"There are no 'earmarks,' as they are usually defined, inserted by lawmakers in the bill," Woodward wrote. "Still, some of the projects bear the prime characteristics of pork tailored to benefit specific interests or to have thinly disguised links to local projects." Pretty clever, huh?

That's why GOP lawmakers laughed when he told a joint session of Congress that the economic-recovery bill, which he signed with great fanfare, contains no earmarks and no pork.

Now Congress has just passed the $410 billion omnibus fiscal 2009 appropriations bill left over from last year, legislation loaded with earmarks for marginal projects back home inserted by lawmakers at the request of fat-cat lobbyists and other big contributors to their campaigns.

There are nearly 9,000 tallow-ridden spending items that were not reviewed by any subcommittee or requested by any federal agency, and they will cost taxpayers close to $7 billion between now and Oct. 1.

These add-on expenditures were stuffed into the bill by lawmakers in both parties who use the appropriations process as their own personal slush fund to pass out money in their districts and states and thus earn the gratitude of special interests at re-election time. It is influence peddling and vote buying, pure and simple.

Many of the earmarks in this bill, and in previous fiscal 2009 bills, raised congressional squandering to a new level, even by Washington's corrupt standards. Estimated as high as $18 billion all told, it comes to more than the Interior Department's entire budget. See whether these fit in your wallet:

-- $143,000 for an online encyclopedia in Nevada. Have these people ever heard of Google?

-- $951,500 for something called a "sustainable Las Vegas." If we are to believe the TV ads for America's gambling mecca, this means money spent in Las Vegas stays in Las Vegas. You betcha.

-- $6.6 million for termite research in New Orleans. Can't Orkin pay for this?

-- And to sweeten the pot, $1.7 million for a honeybee factory in Weslaco, Texas.

The congressional shopping list goes on and on, dishing out money to the Alaska PTA, a robotics center in South Carolina, a rodeo museum in South Dakota and $238,000 for the Polynesian Voyaging Society in Honolulu, Hawaii.

When the bill was being debated in the Senate, an outraged Sen. John McCain read through a partial list, calling it "disgraceful," "corrupt" and outright thievery of the taxpayers' hard-earned tax dollars.

In the end, the Senate passed the bill and sent it off to the White House, where Obama sheepishly signed the document last week behind closed doors.

Congress had produced sausage, as the often-ugly legislative-making process is known. But Obama, who repeatedly promised voters he would go over every spending measure "line by line" and veto each pork bill, held his nose and enacted it into law. He vowed to battle future earmarks and came up with anemic rules to weed them out, but lawmakers said the rules would do little to stop them.

But those bills were just the warm-up. Now they're about to spend some real money -- Obama's $3.6 trillion budget for 2010.