Obama's Gaffes Start to Pile Up 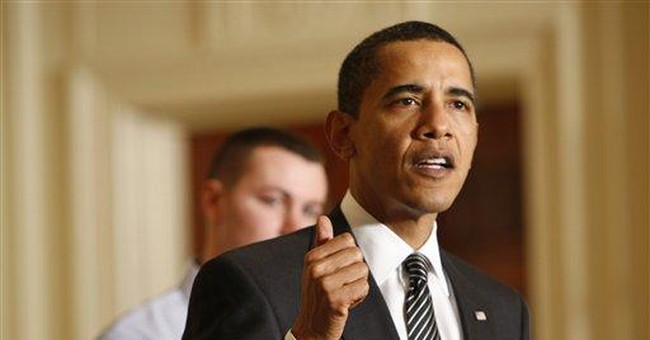 WASHINGTON -- President Obama and his White House staff are making mistakes that continue to worsen an already deflating U.S. economy.

As the stock market plunged below the Dow's 7,000 mark -- a loss of 1,500 points since his inauguration -- Obama casually dismissed the sharp drop in equity values, comparing it to the ups and downs of a poll.

The stock market "is sort of like a tracking poll in politics," he told news reporters. "You know, it bobs up and down day to day. And if you spend all your time worrying about that, then you're probably going to get the long-term strategy wrong."

Excuse me? Tracking poll? That's like dismissing a severed hand as a hangnail.

The stock market represents the life savings and investments of millions of workers. More than 50 percent of American households own shares in public companies.

We are talking about people's retirement finances here that they see vanishing before their eyes, and millions of these investors are middle-class Americans struggling to make ends meet.

This is a time that called for a little sympathy about what this recession is doing to investors.

"The stock market is the country right now. This is where people's wealth is, this is their pension plans, their 401(k)s and IRAs," CNBC's investment guru Jim Cramer said last week.

But the president's seemingly callous shoot-from-the-hip response may have been the result of the political pressure he is coming under as the economy significantly worsens on his watch. Add to this the growing chorus of critics who are blaming the stock market's plunge on his policies.

"There is absolutely no doubt in my mind that President Obama's policy agenda is a factor in driving down the Dow," economic policy strategist Cesar Conda wrote last week in his Politico blog.

"The reason is simple: The threat of significantly higher tax rates on economic success, more government regulation and intrusion in the free market, and explosive increases in government spending and debt have all combined to reduce economic returns on equity investment," he said.

Cramer, whose views on stocks are closely followed by millions of CNBC viewers, said he wanted "some sign that Obama realizes the market is totally falling apart. His agenda has a big hand in that happening."

The other White House blunder came last week, too, when Obama's chief of staff, Rahm Emanuel, took a shot at conservative radio-talk-show king Rush Limbaugh, saying he was the leader of the Republican Party. That triggered a GOP counterattack that took the White House to task for engaging in the kind of political blood sport that Obama had campaigned against, promising to change the tone in Washington.

Cable-TV talk shows fueled the controversy and, by midweek, the White House was in full retreat as it realized their attacks had misfired and backfired. Not a pretty picture.

A somewhat embarrassed presidential press secretary, Robert Gibbs, confessed that the low-road episode had been "counterproductive."

But Republicans were gleefully ridiculing the White House's failed attempt to tie the GOP to the hugely popular Limbaugh's nuclear attacks on the president's policies.

"Now that the Obama administration has declared their own distractions, diversions and manipulations strategy to be counterproductive, House Republicans would like to see this administration join us in our bipartisan national conversation about job creation, stimulating small business and middle-class tax relief," said Brad Dayspring, spokesman for House Minority Whip Eric Cantor, Virginia Republican.

"They should apologize to the American people for supporting these tactics and get back to work," he said.

Meanwhile, the government was moving at its typical snail's pace to get the administration's stimulus money into the states, in large part due to the dozens of critical deputy-secretary posts that remain empty at Treasury and other key departments that have the job of dishing out the funds.

The economy is tanking, and Wall Street still had little confidence that Obama's spending stimulus would work (since only a portion of its funds will be spent this year). And in Congress, the Democrats were doing what they do best, spending more money, this time a massive omnibus fiscal 2009 bill containing 9,000 earmarked provisions that will needlessly cost taxpayers and the economy billions of hard-earned dollars.

The American people are willing to be patient for now, but we are by nature an impatient people and eventually that patience is going to start running out.