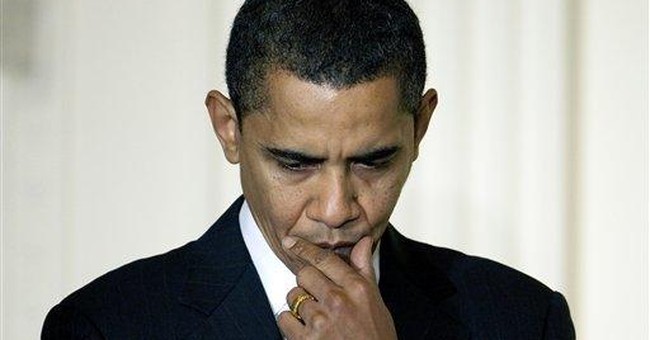 WASHINGTON -- The old saying that money isn't everything seems to epitomize President Obama's inept attempts to jumpstart the economy by throwing $2 trillion to $3 trillion at it. Nothing appears to be working.

First, he signed a nearly $800 billion spending stimulus bill to pump money into the states through a retro-New Deal-style wave of public-works projects, and the financial markets tanked.

Then he announced a second effort to pump $275 billion to bailout subprime mortgage holders threatened with foreclosure and the biggest banks, already tottering toward insolvency, fell into an even steeper nosedive.

Then the U.S. Treasury and the Federal Reserve unveiled yet another public-private economic-rescue plan to leverage $2 trillion or so to buy up toxic assets in the financial industry and other businesses teetering on the edge. It was the administration's second attempt to sell a warmed-over plan that failed to impress Wall Street and the global financial markets. Investors here and abroad fled U.S. equities in droves.

No matter what President Obama has done thus far, he has failed to lift the mood of deepening pessimism that blankets the investment community and the wider economy.

As the week opened, all of the stock-market indexes were continuing their rapid descent, with the Dow Jones Industrial Average sliding toward 7,000.

There were as many explanations for all this as there were economic analysts, but it all came down to one common denominator -- confidence -- and the administration wasn't providing it.

"The biggest thing I see here is the incredible pessimism. The government is doing a lousy job of alleviating fears," complained Keith Springer, president of Capital Financial Advisory Services.

Indeed, there seemed to be only messages of doom-and-gloom coming out of the government. Fed Chairman Ben Bernanke is pushing off recovery until 2010, possibly 2011. Obama and his top advisers were saying it could be years before the economy turns around, maybe not until his term is over.

For the man who had expressed admiration for President Reagan's eternal optimism, Obama's economic rhetoric seemed stuck in the 2008 campaign offensive.

"I just would like him to end by saying that he is hopeful and completely convinced we're gonna come through this," former President Bill Clinton suggested last week.

Writing in CNNPolitics.com this week, global economic analyst David Smick echoed Clinton's advice. "Constantly suggesting, 'If the stimulus doesn't work, there's more to come,' only destroys confidence. Investors and consumers are encouraged to hold off, to see if a better deal materializes down the road," he said.

No one expects the economy to turn around anytime soon, no matter what Obama tries. But there is the reasonable expectation that a new administration can at least change the nation's psychology, and that hasn't happened yet. Indeed, the Washington news media has begun to suggest that the bear market and growing investor fears is inextricably tied to the loss of confidence in Obama's economic policies.

Last week, ABC's George Stephanopoulos reported on the network's nightly news that "since the (administration's) bank plan was unveiled last Tuesday, the Dow has lost 800 points." His report included an interview with an economist who said, "Investors are not convinced (Obama's) programs are going to work."

Support for Obama's economic-recovery plan remains high for now at 64 percent, but as the latest Washington Post poll revealed Tuesday, "deep partisan fault lines are quickly re-emerging." His job-approval rating among Republicans has dropped sharply since last month, from 62 percent to 37 percent, and nearly 40 percent of Americans now approve of the job the GOP is doing in Congress, up by double digits since last year.

Notably, a large majority now says Obama's plan falls short of what is needed to turn the economy around. A whopping 63 percent say much more stimulus is needed (tax cuts?), with 29 percent saying "a lot more." A meek 20 percent say the plan "will be enough."

This is what is fueling the lack of confidence in Obama's recovery plan as the economy retreats into a shutdown mentality.

All that said, I continue to believe in the American economy's inherent resilience -- as long as we pursue the right policies and send the right messages.

Telegraphing -- as the Obama administration did this week -- that it will raise the top-two income tax rates on upper-income individuals and small businesses in 2011 (when the country will still be in, or coming out of, its recession) weakens the economy's future prospects.

Making matters worse, states and counties, from California to New York, are raising taxes, too, creating even bigger obstacles to an early recovery.

This is not a time to be raising taxes on anyone. On the contrary, we should be cutting tax rates on businesses, investors and workers to give the economy the capital and breathing room it needs to recover.

That is the economic prescription that Republicans have been relentlessly urging the administration to take, but without success. A $13-a-week tax credit for low- to middle-income taxpayers that will end next year isn't going to make a dent in a cash-strapped economy. The American people are just beginning to understand that.