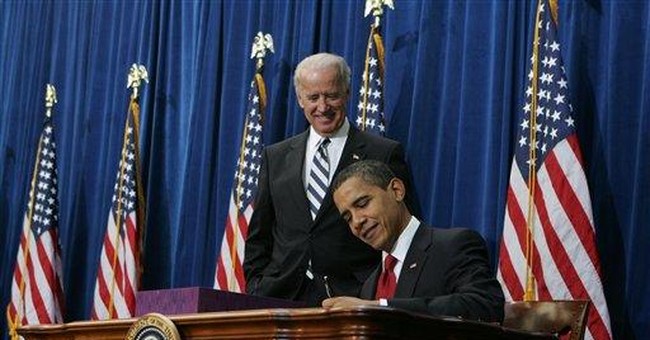 WASHINGTON -- The House's Blue Dog Democrats like to pretend they are the deficit tigers of Congress, determined to stop runaway spending and stamp out waste, fraud and abuse.

But when push came to shove, as it did in the pork-crammed $800 billion economic-stimulus bill, most of these tigers mewed like pussycats, voting in lock step with Nancy Pelosi and Barney Frank for a bill they had not read.

One by one, they inserted their voting cards into the slot in front of their seats and charged the stimulus money to the taxpayers. The first payment will be due April 15. Brace your wallets.

"Toothless tigers is one way to describe them. They are more gums than teeth when it comes to putting a bite on deficits," said Pete Sepp, spokesman for the National Taxpayers Union.

NTU's "bill tally" monitoring showed that Blue Dogs propose three-quarters less spending increases than the Democrats as a whole, but the majority of Blue Dogs still vote for most of the spending bills their party brings to the floor.

"The Blue Dogs can't say with a straight face that they have a moderate or conservative bone in their body. They're exposed as pawns of the most left-wing Democratic leadership in American history," says tax-cut crusader Grover Norquist.

There are about four-dozen Blue Dog Democrats who took their name about a dozen years ago from their Southern ancestry and who showed their party loyalty by saying they would vote for an old yellow dog before voting Republican.

At the start of the new Congress, they vowed that a "top priority will be to refocus Congress on truly balancing the budget and ridding taxpayers of the burden the national debt places on them."

In a Feb. 4 letter to Speaker Pelosi, Indiana Rep. Baron Hill and seven other Blue Dog leaders said they had "serious reservations" about the big stimulus bill then working its way through Congress.

But on final passage, only a half-dozen brave Blue Dogs voted against the bill that will, with interest, add $1 trillion-plus to the federal debt.

One of them was Democratic Rep. Walt Minnick of Idaho, who had offered a $200 billion alternative, but when it failed, he voted no on the stimulus put together by Democratic leaders and the White House.

Minnick soberly told his constituents: "We must be mindful of the legacy we leave for future generations. The consequences of this bill will be painful and possibly harsh for those tasked with the burden of paying for what has been passed today."

The only other Blue Dog no votes came from Bobby Bright and Parker Griffith, both of Alabama, Collin C. Peterson of Minnesota, Gene Taylor of Mississippi and Heath Shuler of North Carolina.

Not all Blue Dogs are entirely honest or accurate in reporting what they voted for on Friday, Feb. 13. Rep. Allen Boyd of Florida issued a release that said "The final stimulus package includes $320 billion in spending initiatives, compared to $544 billion in the original House stimulus bill."

Actually, the bill he voted for contained $515 billion in spending and a whittled-down $275 billion in tax reductions.

But if some of the bill's questionable spending is a sign of things to come, the Blue Dogs and their colleagues will have a lot of explaining to do.

Go online to www.Propublica.org, a journalistic watchdog outfit that is shining some sunlight on the spending spree, and you will get an eyeful. The group boiled down the 1,000-plus-page bill to its separate appropriations. The list is a veritable who's who of all the major departments, agencies and programs in Washington. Everyone has his fingers in the pie.

There's $150 million for the Economic Development Administration, a tired Great Society holdover whose expenditures have wasted untold sums; $636 million for the Small Business Administration whose loans have never made a dent in new business development, affecting only a tiny fraction of start-ups; $1 billion for the Census Bureau for temporary census-taker jobs; and $2.5 billion for National Science Foundation grants to university academics who already have jobs.

Propublica also reported last week that, when it crunched the figures in the stimulus bill for about $100 billion in transportation and infrastructure projects, it "found that states with high unemployment are getting less money per-capita or even per-unemployed worker than states with low unemployment."

And www.StimulusWatch.org now lists all of the projects that are being funded under Obama's plan, many of which raise questions as to need.

In Lewiston, Maine, for instance, $2.6 million will be spent to build a bike and pedestrian path. In Portland, Maine, $2 million will go for a skateboard park; $1 million for a bike-pedestrian trail; $2.5 million to restore a pond; and $500,000 to replace the city's fleet of police cruisers and SUVs.

This is just a small sampling of what the Blue Dogs voted for, and no doubt there's more to come. Stay tuned.