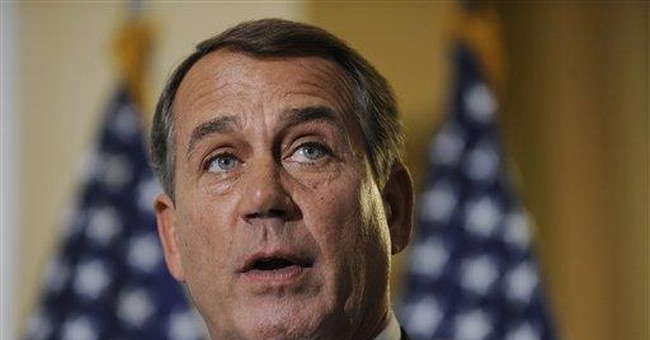 WASHINGTON -- If you've been watching how the nightly news shows have been reporting (promoting?) President Obama's economic-stimulus plan, two things seem abundantly clear: No one questions the wisdom of his recovery package except the Republicans, who apparently have no proposals of their own.

There has been a shocking and embarrassing dearth of critical analysis of Obama's big-spending plan by the network's highly paid reporters. Now and then, one of them pops up with a revealing off-script remark but fails to elaborate on it. CNN's Wolf Blitzer noted Monday that Obama's complicated, Rube Goldberg plan was "confusing at best" and left it at that.

Sadly, there has been no serious reporting that questions how so much public-works, safety-net, social-welfare spending to so many government bureaucracies can get the economy's sputtering engine of growth running again. Even when one of the president's prominent Democratic allies publicly questions his claim that the plan will preserve or create more than 3 million jobs, the network news shows avoid such newsworthy stories like the plague.

The doubting Democrat in this case: North Dakota Sen. Kent Conrad, who chairs the Senate Budget Committee and doubts that Obama's $825 billion stimulus package will create the number of jobs he is promising to deliver. After his committee crunched the numbers in the plan, Conrad said at best it would cut the jobless rate by "maybe" 1 percent, or only half the 3 million-plus Obama claims.

Last weekend, as the president was pressing Congress to act quickly on his recovery package, the networks showed Republicans criticizing the Democrats' bill, but reported nothing about the GOP's own economic plan -- leaving viewers to think they had none.

Actually, the GOP proposals make a lot more sense because they are not calling for a mountain of spending to further enlarge government. They want deeper income tax cuts to immediately strengthen family budgets and businesses that produce most of the jobs.

Among the House GOP's proposals:

-- Small businesses employ half of all working Americans. The GOP's proposals would allow any business employing fewer than 500 workers to cut their taxes by 20 percent. That would improve their bottom line and encourage future hiring.

-- Both parties are calling for extending unemployment benefits, but the GOP amendments called for making those jobless benefits tax-free.

-- The Democrats' massive $500 billion infrastructure spending plan will balloon the budget deficit to nearly $2 trillion this year, but Democrats plan to cut the deficit by raising taxes when the economy recovers.

Republicans also sought to put language in the stimulus bill that would preclude "any tax increases now or in the future to pay for this new spending." Instead of raising taxes, the GOP believes "any stimulus spending should be paid for by reducing other government spending, not raising taxes."

-- Instead of raising capital gains and dividends as Obama proposed in his campaign, Republicans want to make both rates permanent and then index capital gains for inflation to boost capital investment in the economy.

This is the message Republicans are selling: Cut taxes to unleash the power of free enterprise and American productivity to create jobs, and cut federal spending to slow the growth of government that has weakened the economy.

All of this is good as far as it goes, but supply-side conservatives over at the House Republican Study Committee, now chaired by hard-charging Rep. Tom Price of Georgia, think their plan can do even better.

Price's hardy band of tax-cutters wants a permanent 5 percent across-the-board income tax cut. They also want to boost the $1,000 per child tax credit to $5,000 starting in 2008 that would "provide a substantial, immediate tax cut for middle-class families."

They are also calling for the repeal of the Alternative Minimum Tax for Individuals (AMT), and making all withdrawals from IRAs tax- and penalty-free in 2009 to allow hard-pressed taxpayers during the recession to have free access to their savings.

Plus, they want to allow businesses to take full and immediate expensing deductions on their tax returns, cut the corporate income tax rate from 35 percent to 25 percent and make the research-and-development tax credit permanent.

This is the kind of tax-cut-driven, capital-growth economic-recovery plan that is needed to get this $14 trillion economy back on track and lift the global economy along with it.

It's time the network news shows gave the GOP's tax cuts the attention they and the American people deserve. Barack Obama and his economic advisers might even learn a thing of two about economics if they did.