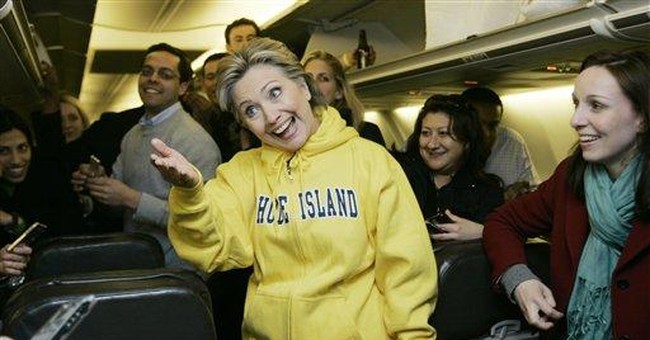 WASHINGTON -- Hillary Clinton's mercurial campaign is reaping the law of diminishing returns. With each change in strategy, mood and tactics, she is falling further behind her arch nemesis, Barack Obama.

Nothing seems to be working for the New York senator who has tried four tone-of-voice changes and multiple personalities in an attempt to pierce Obama's cool, unflappable, self-confident demeanor.

Whether it's the experience strategy that proclaimed she was "ready to lead on day one," her attacks on his superior oratorical skills, the humbling admission she was proud to be in a race with Obama or the angry, over-the-top "shame on you, Barack Obama" for identifying her with the NAFTA pact she praised in her book -- nothing works. Her polling numbers keep drifting lower, and Obama's keep rising.

The disciplined Obama keeps his message focused on "change," while Clinton keeps changing her message.

It will all come unraveled next week on March 4 in Texas and Ohio, the two primaries that party leaders and strategists, including her husband, say she must not just win but must win decisively to stay in the race.

"Clearly, she needs to have a very good day on March 4 to regain her momentum," former Democratic National Chairman Steve Grossman told me.

"I think if we lose in Texas and Ohio, Mrs. Clinton will have to make her decisions as to whether she goes forward or not," Clinton adviser Harold Ickes told reporters this week.

With Obama holding a clear lead in the delegate race and assured of winning a big share of the 444 delegates at stake in next week's contests, which include tiny Rhode Island and Vermont, Clinton's candidacy looks hopeless.

Even Bill Clinton senses that after Obama's 11 straight primary/caucus victories, Texas and Ohio were slipping away from her. "If you don't deliver for her, then I don't think she can be (the nominee)," he said last week while campaigning in Texas.

In Texas, where 228 delegates were at stake, and where she once had a double-digit lead, polls now show the two rivals either in a dead heat or a slight lead for Obama.

In the battle for Ohio's 161 delegates, her huge 21 percent lead earlier this month has shrunk to seven points (50 percent to 43 percent) in recent polls. She will sweep Rhode Island, but Obama will take Vermont.

Independents made up 22 percent of the vote in the party primaries held thus far, and Obama has won this bloc by a hefty 64 percent to 33 percent. In Ohio, a swing state that will be pivotal in the fall, Clinton leads by 20 points among women, but Obama leads by 10 points among men who tend to turn out in larger numbers in primaries.

In the meantime, Democratic analysts have been doing the delegate math in the remaining 14 contests where 972 pledged delegates will, by and large, be proportionately accorded to each delegate based on the share of the vote in each congressional district.

Some have already concluded that Obama appears poised to come close to the 2,025 delegates needed to clinch the nomination.

"Most outside observers believe that Clinton must win both Texas and Ohio and do so by margins wide enough to eat into Obama's lead in pledged delegates. This will not be easy," wrote veteran Democratic strategist Bill Galston in a memorandum being circulated among Democrats last week.

"If Obama's (delegate) margin on March 5 is at or near its current level, many of the ... superdelegates who are now officially undecided will likely decide that it is time to bring this historic contest to a close," continued Galston, a domestic-policy adviser in the Clinton White House.

"If he were to win 65 percent of them ... he would finish with a total of 1,985 delegates, only 40 short of the 2,025 needed for the nomination, while she would trail with 1,604," Galston figured. That "would almost certainly bring into his camp the modest number of additional superdelegates needed for outright victory."

There has been talk in Clinton's high command about fighting it out at the August convention over the superdelegates and the delegates from Florida and Michigan, two states Clinton won but whose unsanctioned primaries go unrecognized by the Democratic National Committee.

Ickes talked ominously this week at a Christian Science Monitor breakfast with reporters about "a bitter and potentially very divisive credentials fight" at the convention.

Obama supporters believe that if he does well in Texas and Ohio, the remaining unpledged superdelegates will rally around him. But that kind of talk is given the cold shoulder from Clinton supporters.

"If Hillary Clinton regained the momentum and goes into the final months with the wind at her back, the superdelegates could play a significant role. Superdelegates were chosen to bring good independent judgment to the nominating process and not to be rubber-stamped," Grossman told me.