The Reign of McCain Might Not Be A Gain 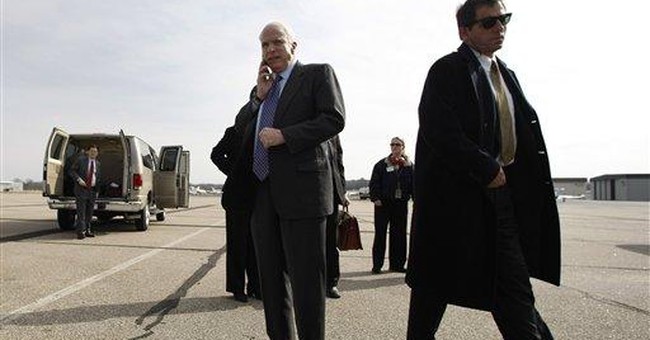 WASHINGTON -- There are many reasons why Sen. John McCain has become the presumptive Republican presidential nominee, reasons that have effectively stymied all of his opponents.

He's been around the nominating track before, remaining at the center of party policy debates ever since 2000, and now it's his turn. He has been out front on the central national security issues of our time, radical Islamic terrorism and the Iraq war. No one has fought wasteful, pork-barrel spending and other big expenditures with more tenacity (he opposed the prescription drug bill) -- a bedrock issue that strongly resonates with his party's base.

These and a few other reasons (like weak opponents) are why McCain has been able to wage a comeback from the brink of political extinction and close in on the 1,191 delegate votes needed to become his party's nominee.

Perhaps none is more important than his previous run for president and his ability to dominate the policy spotlight. He has been a ubiquitous presence on the Sunday morning talk shows for the past decade, maintaining a visibility that his remaining rivals never had. Pollsters will tell you that high name recognition, most other things being equal, is the most valuable political commodity any candidate can possess.

Having run a presidential campaign before does help enormously. Nixon won on his second try, so did Reagan and George H. W. Bush. It may be exaggerated, but the GOP does seem to have a habit of taking turns.

Then there is the dark side of McCain that has enraged conservative talk radio hosts (who have mounted a nonstop offensive against him) and many foot soldiers in the conservative base of his party, a number of whom say they could never vote for him under any circumstances.

We don't know how many fall into that category, but most of them live in Republican red states, like Utah, Colorado, Georgia and Tennessee, that Huckabee and Romney (before it was reported he was dropping out) have been winning (more than a dozen at last count).

Conservatives' differences with McCain are not inconsequential and have been enumerated in this column many times. The senator's opposition to the Bush tax cuts, a First Amendment-bashing campaign-finance bill, his resistance to drilling for oil in ANWR, and the immigration reform bill he supported with Ted Kennedy are all problem areas.

McCain says he now supports the tax cuts and would cut taxes further. He promises to appoint judges to the Supreme Court in the mold of Roberts and Alito. He says he would get much tougher on border enforcement. He acknowledges the campaign-reform bill hasn't worked the way he hoped it would.

McCain is attempting to mend fences with his conservative critics, a daunting challenge to say the least. He has been a party maverick since day one, and did not show good judgment when he first ran in 2000, attacking one conservative leader after another and wondering in the end why he lost.

One of rules in presidential campaign politics is to first nail down your party's base and then make overtures out to the broader electorate. McCain is doing it in reverse; he first reached out to independents and Democrats and is now desperately trying to nail down his base in preparation for the general-election campaign ahead.

In the thick of presidential primary battles, party tempers rage and flare, passions get red hot, and no doubt there are those conservatives who will never vote for McCain if he is the nominee. But even among the conservative talk show leaders, I'm told that in the end, despite all of their differences with the Arizona senator, most of them would support him against either Clinton or Obama. I suspect that will be true of many of his critics in the party's base.

Meanwhile, I think we can safely say that we haven't seen the last of Mitt Romney. Like the smart venture capitalist that he is, he no doubt has long-range goals in mind.

Reagan came within an eyelash of wresting the nomination from Ford, but that set the stage for his dramatic comeback four years later -- better known, with more support and a party that was ready and willing to say, "Now it's your turn."

For my money, I don't see a presidential future for Huckabee who has been running, in part, on replacing the income tax with a 23 percent sales tax on everything we buy, on top of the sales taxes we already pay. But I think Romney will likely run again, now that he has built name recognition and support in the party for his talents as a leader who, unlike McCain, doesn't need on-the-job training in economics.

"I'm going to be honest. I know a lot less about economics than I do about military and foreign-policy issues. I still need to be educated," the senator told Wall Street Journal editor Stephen Moore.

If McCain is the nominee, he may need Romney by his side to tell him how to get the American economy back on track again.