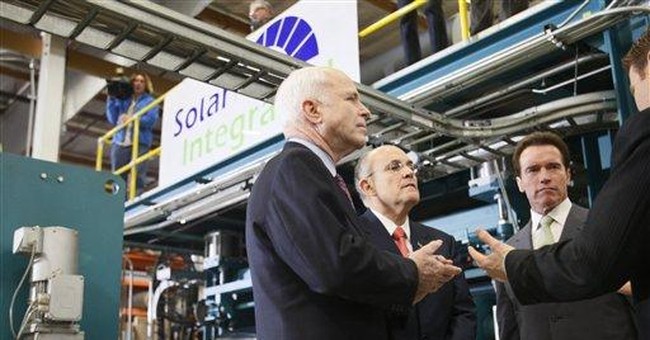 WASHINGTON -- The prospect of John McCain all but clinching the GOP presidential nomination in Super Tuesday's primaries has certainly raised the anxiety level among conservative Republicans.

The trouble with McCain, conservative leaders say, is that he strays far afield from party orthodoxy on so many issues -- vital, ideological issues that lie at the core of the GOP's agenda.

There was the Arizona senator's rigid opposition to the Bush tax cuts. He voted against them twice, in 2001 and 2003, votes that to this day he claims were justified, even though he now wants to make the tax cuts permanent.

There was his authorship of the McCain-Feingold campaign finance bill, a piece of legislation that interest groups on both sides of the political aisle said was a draconian attack on the once-sacrosanct freedom to engage in political advocacy on the airwaves in the weeks leading up to an election.

McCain said his bill would end the role of big money in election campaigns, but it did nothing of the sort. Campaign spending has only ballooned to even more mammoth proportions. Instead, the legislation turned out to be nothing more than an incumbent protection law, shielding members of Congress from serious political challenges at the ballot box.

The bill was harshly criticized by widely disparate groups, from the AFL-CIO to the Right To Life Committee, who deemed it unconstitutional, which it is.

Then there was McCain's alliance with Massachusetts Sen. Edward Kennedy, on the Kennedy-McCain immigration reform bill that was hotly opposed by the base of his party who think it went too far in offering illegal immigrants a conditional path to citizenship. The uproar caused him to tone down the issue on the campaign trail, placing more emphasis on border security, which is the base's chief concern.

A core GOP position on energy independence is to make full use of this country's vast oil reserves, either offshore or in untapped parts of the country, such as the Arctic National Wildlife Refuge.

But McCain, unlike Bush, is opposed to drilling in ANWR, likening it to mining or drilling in the Grand Canyon, an absurd comparison. Oil drilling technology today is as unobtrusive as microsurgery. It would leave a very tiny "footprint" on ANWR's millions of acres and cause no harm to terrain or wildlife.

For many conservatives, no issue is more important than putting strict constructionists on the Supreme Court, and McCain has said he would appoint conservatives in the vein of Chief Justice John Roberts and Justice Samuel Alito. But in a Wall Street Journal online column, John Fund says McCain, in private conversations with lawyers, has "indicated he might draw the line on a Samuel Alito because 'he wore his conservatism on his sleeve.'"

These are among a number of issues that have fed deep doubts about McCain among party members and leaders at the GOP's grassroots.

It's the reason why exit polls in Florida's Republican primary found that among those voters who described themselves as "very conservative" (27 percent), McCain drew 21 percent, compared to 44 percent for Mitt Romney. The reverse was true among self-identified liberal to moderate voters (39 percent). McCain won 45 percent of that group compared to 22 percent for Romney.

McCain's problems with his party's right have been played out on conservative talk radio, where he has been a punching bag for the likes of Rush Limbaugh, Laura Ingraham, Hugh Hewitt, Sean Hannity and other top shows.

"He has a legislative record that is not conservative. In fact, it is anti-conservative," Hewitt said.

Still, while many conservatives have serious disagreements with him on bedrock policies, many of them also say there is much to like about him: his unflagging leadership against Islamic extremism and his unyielding defense of the war in Iraq and the troop surge, when others in his party headed for the tall grass and were calling for surrender. Few in the party have been as tough on spending cuts as he has.

"I admire the heck out of John McCain and disagree with him on at least half a dozen serious matters," said Bill Bennett, whose stout defense of the senator on his popular talk radio show has drawn legions of angry callers.

"He is a war hero, he has been consistently pro-life, he put his campaign in hostage to the success of the surge in Iraq, he's been a consistent hawk on pork-barrel spending, and can win in November," Bennett told me.

But the former drug czar and education secretary said the heated nature of the anti-McCain phone calls to his program underscores his weakness among the GOP's conservative base.

"What rankles me the most is his tendency to criticize our side first. Why bash us, why not bash Hillary Clinton? He's got to have some of the fire that Democrats have for Republicans," Bennett said.

"If he is the nominee, he's got to fix things with the base of the party, because you can't have a convention with these kinds of feelings," he said.

Does Bennett have a breaking point over the senator's candidacy? "Ask me tomorrow," he replied.